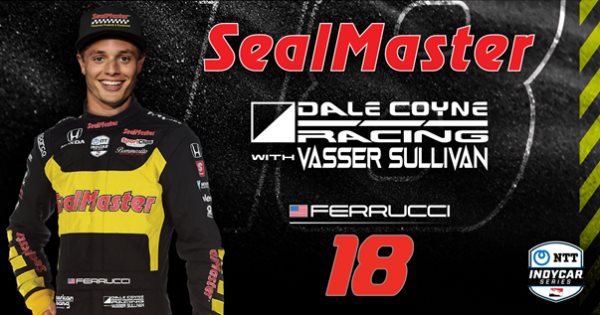 The car will carry primary sponsorship support from SealMaster Pavement Products and be entered as the No. 18 Team SealMaster – Dale Coyne Racing w/ Vasser-Sullivan Honda.

In his first full IndyCar season, Ferrucci, 21, a native of Woodbury, Connecticut, made up 16 positions to finish seventh in the 2019 Indianapolis 500 earning him “Rookie of the Year" honors, completed the third most laps of any driver in the series and finished fourth among all drivers on ovals.

Dale Coyne, Team co-owner Dale Coyne Racing w/ Vasser-Sullivan: “We’re very happy to have Santino back with us for the 2020 season. He had a very good rookie season and he was absolutely stellar on the ovals. We look forward to him building on that this year. I think he surprised a lot of people in 2019 and he has the potential to do even better in his sophomore year as he now moves to the No. 18 car."

James “Sulli" Sullivan, Team co-owner Dale Coyne Racing w/ Vasser-Sullivan: What a big moment for DCVS and the program as we begin our next chapter. This new crop of young fast IndyCar racers is no joke, and we’re energized to have Ferrucci leading our charge in the SealMaster machine. I expect you’ll see some big moments from us in 2020."

Santino Ferrucci, Driver No. 18 Team SealMaster – Dale Coyne Racing w/ Vasser-Sullivan Honda: “I’m extremely honored that Dale, Jimmy, and Sulli have put their faith in me to carry this program forward. The SealMaster car has had a lot of success in the past two seasons. I’m eager to move into the No.18 car and get spring training started. I also want to say a big thank you to SealMaster for believing in me, and I’m beyond excited to represent them on the biggest stage."

Debbie Petok Hufford, SealMaster Communications Director: “We’re excited to have this impressive, new talent behind the wheel of the SealMaster Indy car. Santino had a great 2019 IndyCar series debut and we look forward to the energy and enthusiasm he’ll bring to the 2020 season."