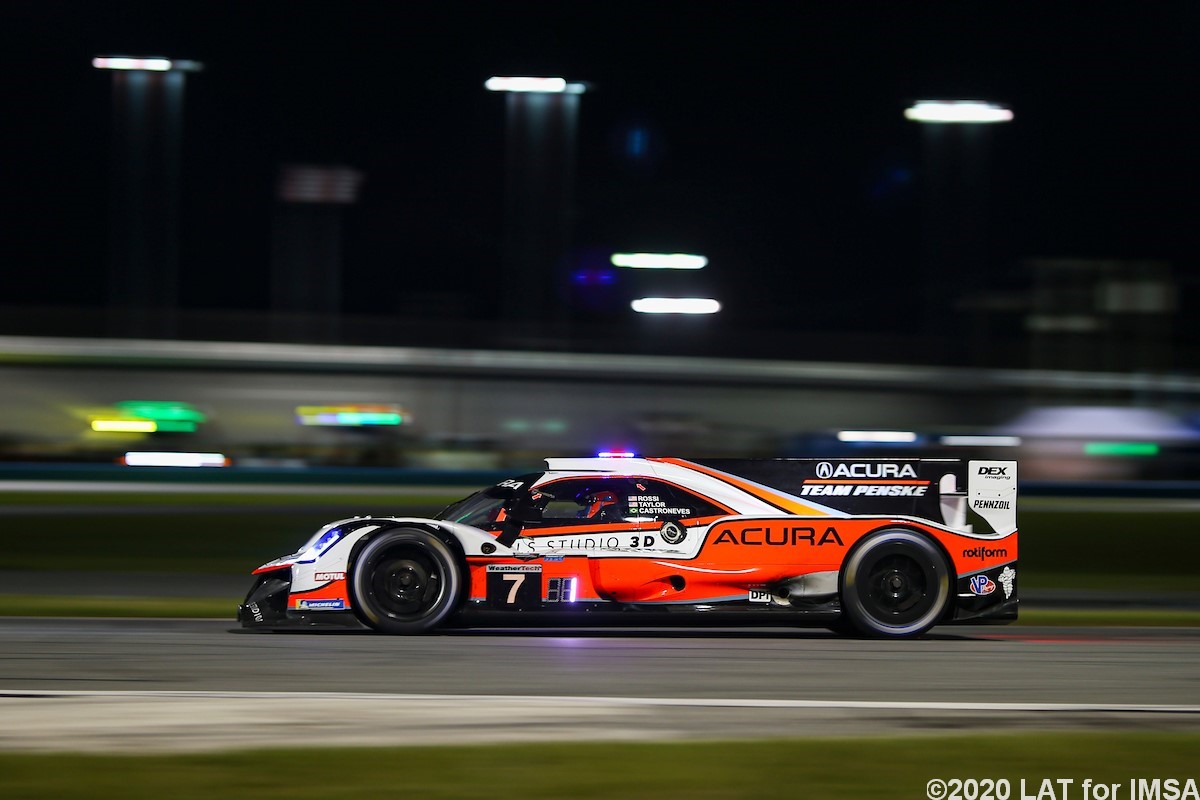 The World Center of Racing will open for business again this week with the annual party whose pageantry and prestige signals the end of American auto racing’s hibernation.

The Rolex 24 means an iconic Ferris wheel, a cornucopia of classic cars on display and the on-track roar of a few dozen exotic engines. Their siren call will lure thousands as die-hard fans flock to Florida from 31 countries in a winter escape for all that one of the world’s great endurance races has to offer.

Scott Dixon has trekked to race at Daytona International Speedway in late January since 2004, and the annual pilgrimage marks the “perfect combination of man and machine" as well as a de-facto spring training for stars across myriad racing series from around the globe.

“It’s the perfect start for me, and it always has been," Dixon said. “This is one of the top five races in the world. The competition level and even the manufacturer level now is big. And all these things pull you into it.

“But for me, it’s the pure enjoyment. I love doing this event as much as the Indy 500 or Sebring 12 Hour or Le Mans 24 Hour. They call it an endurance race, but it’s really a 24-hour sprint race. It’s flat out.

“It’s very demanding on the drivers, the teams. To have the opportunity to win is huge."

The five-time IndyCar champion already is a two-time overall winner of the Rolex 24, and his return to the DPI class with defending winner Wayne Taylor Racing will give him an excellent shot to regain the top step of the podium this year.

With Dixon among more than 140 drivers competing across 39 entries on the 3.56-mile layout, there will be storylines galore unfolding across the 24-hour event, which will begin Saturday, Jan. 25 at 1:30 p.m. ET on NBC.

Here are five to watch entering the 58th running of the Rolex 24 at Daytona:

The heavyweights reload: In the premier DPI division Wayne Taylor Racing’s No. 10 Cadillac will turn over half of the lineup that won last year’s overall title.

Gone are Jordan Taylor (son of the team’s owner) and two-time Formula One champion Fernando Alonso, but returnees Renger van der Zande and Kamui Kobayashi have been fortified with the starpower of Dixon and Ryan Briscoe (both refugees from Chip Ganassi Racing’s shuttered GTLM program), veteran winners of IndyCar and sports cars.

“We got rid of our weak link with Jordan," Wayne Taylor said with a laugh. “It’s probably as good or better with the driver lineup."

But Team Penske lagged behind Taylor’s Cadillac in the rain last year and also had a mechanical problem on its No. 6.

“Last year, I think we had enough speed to fight," Montoya said. “In the rain, we did miss a little bit of pace. We worked on it a little bit. It will be interesting to see where we stack now. With the mechanical issues, the last couple of years it has been disappointing because if you look at our true speed, and when you’re unlapping yourself from the guy winning the race, it is very frustrating. But we’ll try hard and hope we have no issues and do not create any issues."

Reliability was an issue in ’19 for Mazda Team Joest, which won the pole position but short-circuited from contention with mechanical problems for both of its cars just past the seven-hour mark.

The Mazdas, who have added 2014 Indy 500 winner Ryan-Hunter Reay, consistently posted the fastest laps during the Roar before the Rolex three weeks ago, but this weekend will prove whether its offseason work on dependability bears out.

“We’re definitely in a different place and looking forward to finishing," Jonathan Bomarito said. “Our car is very fast, but for a 24-hour race, we’re still underdogs. We haven’t finished this race in a very long time. With the preparations we’ve done, I’m feeling pretty good about it."

Rain, rain stay away: There will be many anxious eyes on the weather forecast with a sense of unfinished business lingering from a 2019 Rolex 24 that concluded under virtual tropical storm conditions.

After 16 hours of fierce battles for position (including a memorable frontstretch scrape between Montoya and Kobayashi), last year’s final eight hours were conducted in monsoon conditions that unfortunately turned an entertaining spectacle into an untenable exhibition of nonstop hydroplaning.

“It was horrible," Porsche driver Laurens Vanthoor said. “Last year was probably one of the hardest, most difficult, scariest experiences I’ve had. It was a huge amount of rain and you can imagine being on the banking going (175 mph) full on in the rain, and you can barely see the car in front of you."

Besides robbing fans of racing at speed, the rain also effectively neutralized teams from being able to show their full hand.

“Last year we were in a great position, we could lead when we wanted to and were just staying in the top two to three," Rossi said. “Then it rained, and it all went to hell. I think we’ve made a lot of improvements in the car in the rain performances, so that’s a very good thing considering this race is bound to be wet at some point."

Hopefully, not nearly as wet as last year’s event, which had the dubious distinctions of being the only Rolex 24 with two red flags. Because of track flooding caused by the torrential downpours, it also was the first Rolex to end under a red flag, 11 minutes short of the 24-hour duration.

Faces in new places: Chip Ganassi Racing’s Fords being sidelined after a four-year run necessitated the relocation to DPI of Briscoe and Dixon, who are among the many drivers shuffled throughout the grid.

While IMSA has enjoyed an influx of manufacturer support and escalating car counts in GTD and LMP2, sponsorship remains tight at the top with annual budgets per car for first-tier DPI teams rising into the $6 million range. That’s left some drivers with limited or no prospects (aside from Dixon and Briscoe, Ganassi’s other Ford drivers haven’t landed rides), and this year’s 39 entries (down from 47 last year) will mark the smallest field in the 58-year history of the Rolex 24 (the previous low was 42 starters in 1962, the race’s second year).

American star Colin Braun, a 17-time IMSA winner who finished fourth in last year’s Rolex 24 and nearly won the DPI title in 2018, still is trying to secure his future after the closure of CORE Autosport. He will race an LMP2 with defending Rolex 24 class winner DragonSpeed this weekend but has yet to announce the rest of his 2020 schedule (the one-time winner in the NASCAR truck series is exploring IndyCar).

“It’s no secret this year in IMSA has been tough in terms of new blood coming in; it’s been a lot of people leaving or reducing down," said Braun, who estimated DPI budgets have tripled from the $2 million per car five years ago. “So I thought there were a number of opportunities that might have worked out, but a lot of those ended up closing or condensing down.

“It’s disappointing in one way to not be in a full-time gig at this point, but we’ll see what shakes out the rest of the year. You look at the number of teams that have left, and it’s sort of just a numbers game. I wished I opened the news and read about new teams coming in, and I hope we get back to that soon."

—Jordan Taylor has joined the GTLM mainstay Corvette Racing, which is rolling out a new mid-engine car with its C8.R. It’s a massive overhaul, but it should help the transition for Taylor, who spent the last seven IMSA seasons in the much faster prototypes (and now must adapt to being lapped regularly). “It’s still a big change," Taylor said. “It’ll be a learning curve. But I did GT racing the beginning of my career, so I’ll just be relearning those habits again of checking the mirror."

—JDC-Miller Motorsports’ partnership with Mustang Sampling on the No. 5 Cadillac in DPI will provide a landing spot for Sebastien Bourdais, who lost his IndyCar ride in the offseason. The four-time champion will be joined by Joao Barbosa, a two-time IMSA champion who moves over from Action Express (where he won the Rolex 24 overall in 2010, ’14 and ’18).

–In the GTD class, Katherine Legge and Christina Nielsen will race with an all-female team for the second consecutive Rolex 24 but under a new banner. Legge and Nielsen will be teamed with Tatiana Calderon and Rachel Fry in a Lamborghini for the Girls Empowerment Around Racing (GEAR) team fielded by Grasser Racing.

Joining three drivers in the No. 14 Lexus RC-F for AIM Vasser Sullivan Racing, Busch will be making his second IMSA start at Daytona but his first in the prestigious season opener.

As usual, the DPI category will attract much of the starpower, including all six Indianapolis 500 winners (with a collective nine victories at the Greatest Specatcle in Racing) in the field. Five IndyCar champions and 26 24 Hours of Le Mans winners will be racing at Daytona.

There also will be a smattering of fresh faces from NASCAR in Friday’s BMW Endurance Challenge race. Hailie Deegan, who will return to Daytona in two weeks to begin her 2020 ARCA schedule, will be racing a MultiMatic Motorsports Ford Mustang GT4 with Xfinity Series championship contenders Austin Cindric and Chase Briscoe.

Notable numbers: There are 12 manufacturers spread across the four classes with nearly half the field consisting of the 18 entries in the stacked GTD (which are built to FIA’s GT3 spec making them legal in dozens of series and sold as is in manufacturer showrooms).

The breakdown among the other 21 entrants: eight cars in DPI, six in LMP2 and seven in GTLM.

There are 42 drivers with at least one previous Rolex 24 victory, and that includes Turner Motorsports BMW’s Bill Auberlen seeking his third class win. If the 51-year-old California triumphs in GTD for his 61st career victory in IMSA, he will break a tie with five-time Rolex 24 champion Scott Pruett to become the winningest driver in series history.

Former winners Townsend Bell (GTD in 2014) and A.J. Allmendinger (overall in 2012) will be pulling double duty for the second consecutive year as in-race broadcasters for 24-hour coverage of the Rolex on NBC, NBCSN and the NBC Sports App (full schedule below). NBCSports