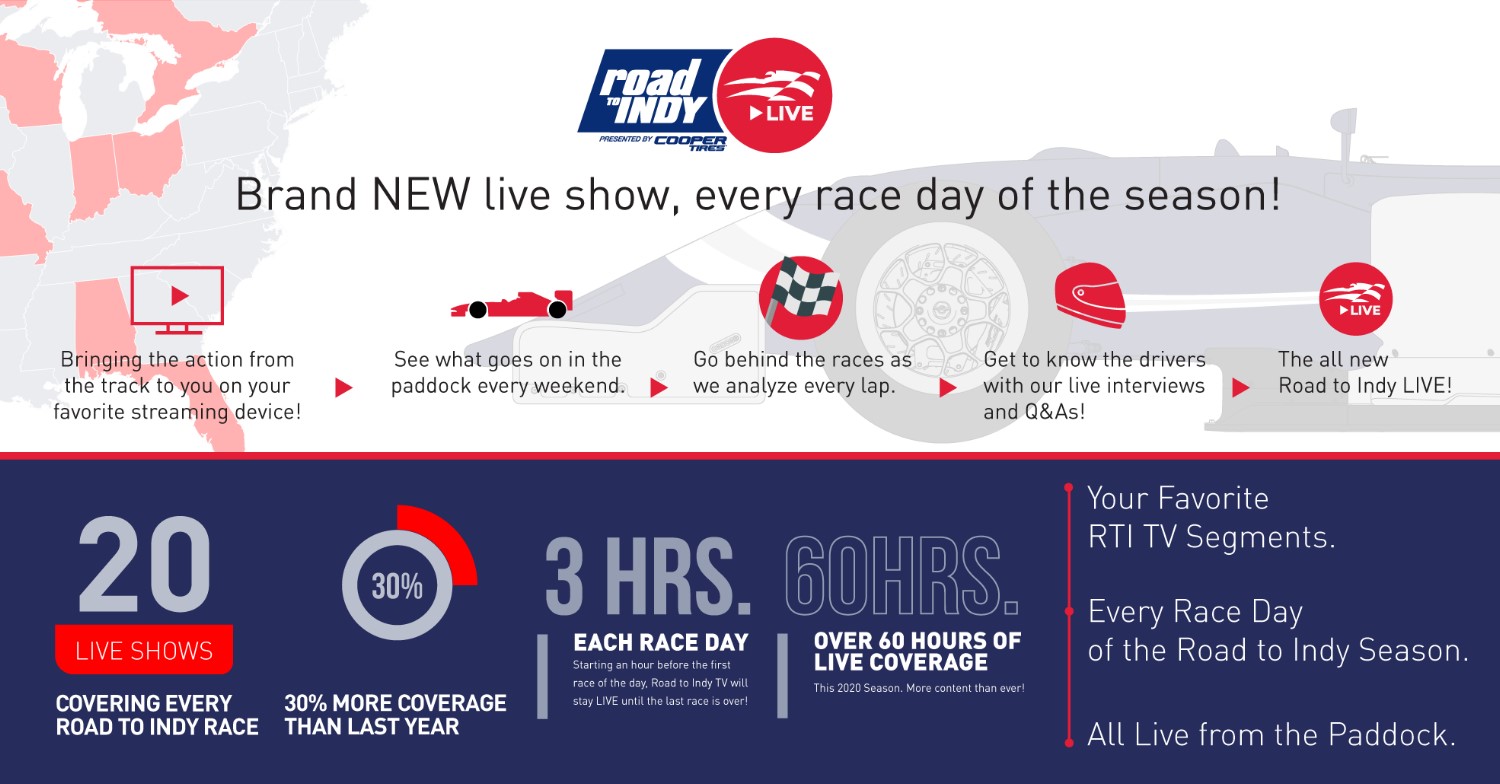 Road to Indy TV is the brainchild of JP Manterola, Founder, CEO and Creative Director of Pro Racing Group – an international award winning, full-service sports marketing agency headquartered in Lithia, Fla. just outside Tampa. Since 2014, Manterola and his team, including Senior Creative Designer Travis Earnest and Project Manager and Producer Kyran Guild, have strived to bring unprecedented coverage of the Road to Indy across all platforms.

In 2016, the Road to Indy became the first American racing series with a dedicated broadcast channel on demand and also the first open-wheel series to have an official App on Xbox One. In 2020, all shows will now be available on demand as well as live on Apple TV, Amazon Fire and Roku. The shows will also be live streamed on the free Road to Indy TV App (which launched in 2015), on RoadToIndy.TV and its social media platforms and on the respective series websites – indylights.com, indypro2000.com and usf2000.com – and social media outlets.

Road to Indy TV will now be producing full live race shows with over three hours of streaming content daily on race weekends which includes a dedicated pre-race show, and race and post-race coverage of each series highlighted by special segments Paddock Pass, RTI Insider and The False Grid.

For the first time, embed codes for all shows will be available to series drivers, teams, partners and interested media for live streaming use on their own outlets.

“Live content is so important in this day and age," said Manterola. “In 2020, live streaming is expected to account for 82% of all internet traffic. Our goal with our new expanded live programming is to meet what the numbers tell us in terms of consumption by consumers with quality live programming and behind-the-scenes access. The Road to Indy is a great product with tremendous racing and a host of stories off the track. We are excited about the creative process we have lined up and look forward to engaging more fans this season."

All creative content will be supported by social media marketing, providing better brand recognition among a wider audience and more exposure for series competitors. In addition, in-show branding and advertising opportunities will be offered for the first time.

“JP and his team are tremendously passionate in their efforts to expose the Road to Indy to as large an audience as possible," said Dan Andersen, Owner and CEO of Andersen Promotions. “Each year they strive to take their creativity and technical capabilities to new heights, and 2020 will begin a new era of live content for our teams, drivers and partners thanks to their efforts."