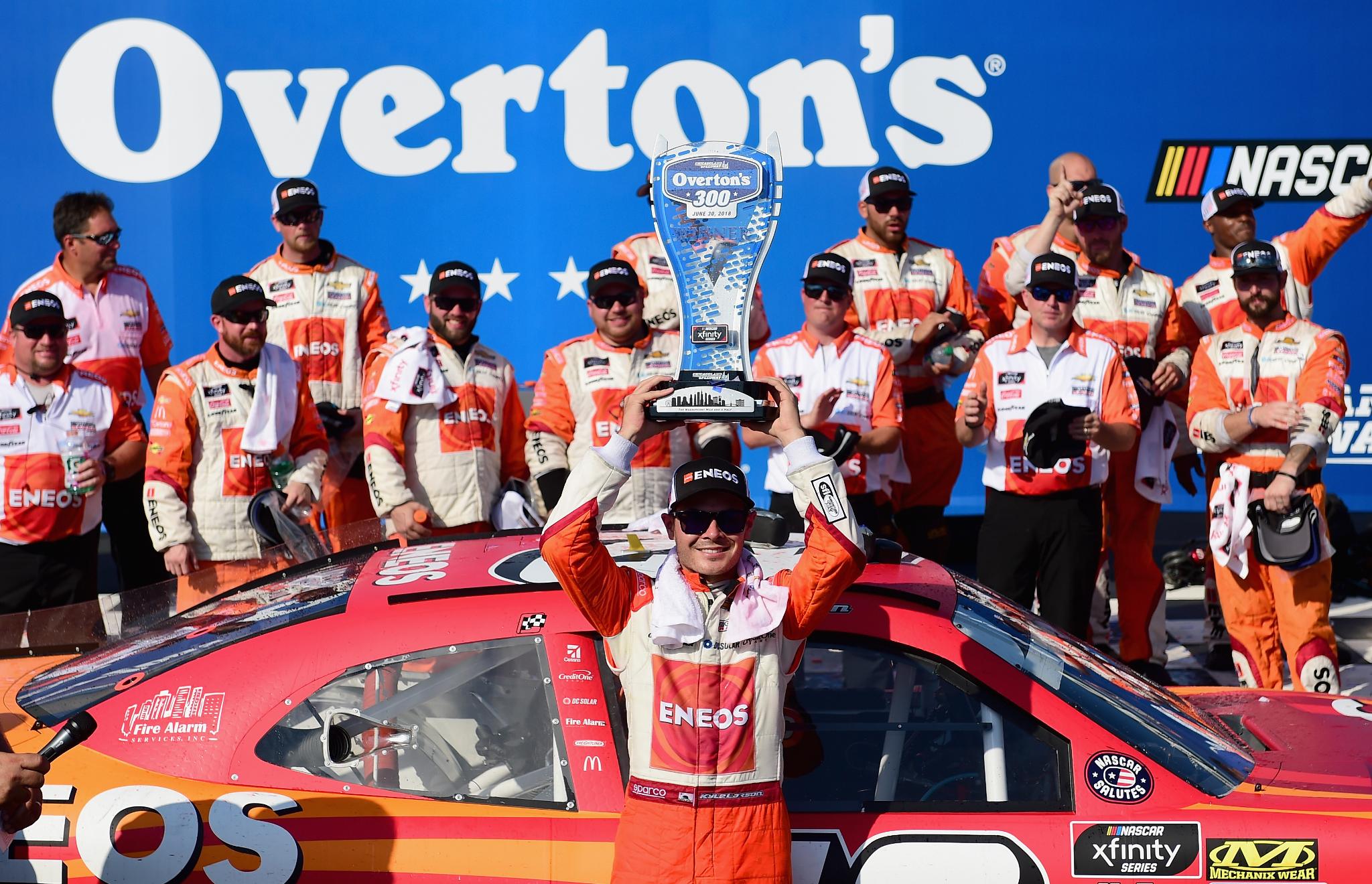 When Kyle Larson crossed the finish line at Chicagoland Speedway 8.030 seconds ahead of runner-up Kevin Harvick, there were no screams of elation from the winner of Saturday’s Overton’s 300 NASCAR Xfinity Series race.

Instead, Larson placed an order.

"Water, ice and towel at the start/finish line," Larson radioed to his team, after winning a race in mind-numbing heat that approached 150 degrees in the greenhouse of his No. 42 Chip Ganassi Racing Chevrolet Camaro.

Larson had won the pole earlier in the day but had to start from the rear of the field because of a flat right front tire that required changing before the race. That proved only a temporary deterrent.

By the end of the first 45-lap stage, Larson had driven up to sixth place, and on Lap 72, he made a three-wide pass of Harvick and Christopher Bell to take the lead for the first time.

The 25-year-old Californian went on to lead a race-high 80 laps and took advantage of an 80-lap green-flag run to the finish to win for the first time at Chicagoland, the second time this season and the 10th time in his career.

[adinserter name="GOOGLE AD"] "Yeah, it was pretty hot," Larson said in the understatement of the week. "But the adrenaline was kicking in. I can’t say enough about this race car. We were really bad (Friday in practice), so it’s cool we could win.

"We were able to get our car better for today. These guys (the No. 42 team) never quit. The pit crew was amazing. That was really a key there, I thought, to get some track position after falling back to fourth (after the restart following the end of Stage 2)."

In fact, Larson gained two positions on pit road under a caution for debris in Turn 4 on Lap 114 and restarted third on the bottom on Lap 121. He cleared the fourth-place car of Christopher Bell on the restart and took off in pursuit of Harvick, who had assumed the lead.

"I was able to stay pretty close to Harvick on the bottom," Larson said. "I felt like, if the race stayed green, I would eat him up."

Indeed, after the tires began to wear, Larson moved to the top of the track, where he was unstoppable. On Lap 142 he surged past Harvick into the lead and extended his advantage to more than four seconds before a cycle of green-flag pit stops that started on Lap 166.

When the cycle ended with Brandon Jones’ stop on Lap 180, Larson was up by 9.490 seconds. From that point on, it was a cruise to the finish—in a steam bath.

"I needed a short run there, for sure," said Harvick, who led 38 laps. "The Hunt Brothers Pizza Ford was really good there for about 25 laps, and Kyle would struggle for 25 laps. I just didn’t need it to go green.

"I just couldn’t run the top. I would slide the front tires, and I didn’t have enough rear grip to throttle through the center of the corners. My car wouldn't turn, but on the bottom."

And the bottom lane wasn’t the fast way around the 1.5-mile track when the tires began to wear.

Cole Custer ran third and took the series lead from sixth-place Elliott Sadler, who fell to third in the standings behind Custer and fifth-place finisher Daniel Hemric. Daniel Suarez came home fourth in his second Xfinity start of the season.

Justin Allgaier ran seventh, followed by Paul Menard and Chase Briscoe, who scored his first career top-10 in the series. Chase Elliott was 10th and paid a quick visit to the infield care center before Monster Energy NASCAR Cup Series qualifying for some IV fluids.

"I feel a lot better now," Elliott said on his way out of the care center. "Those IVs make you feel like a million bucks."