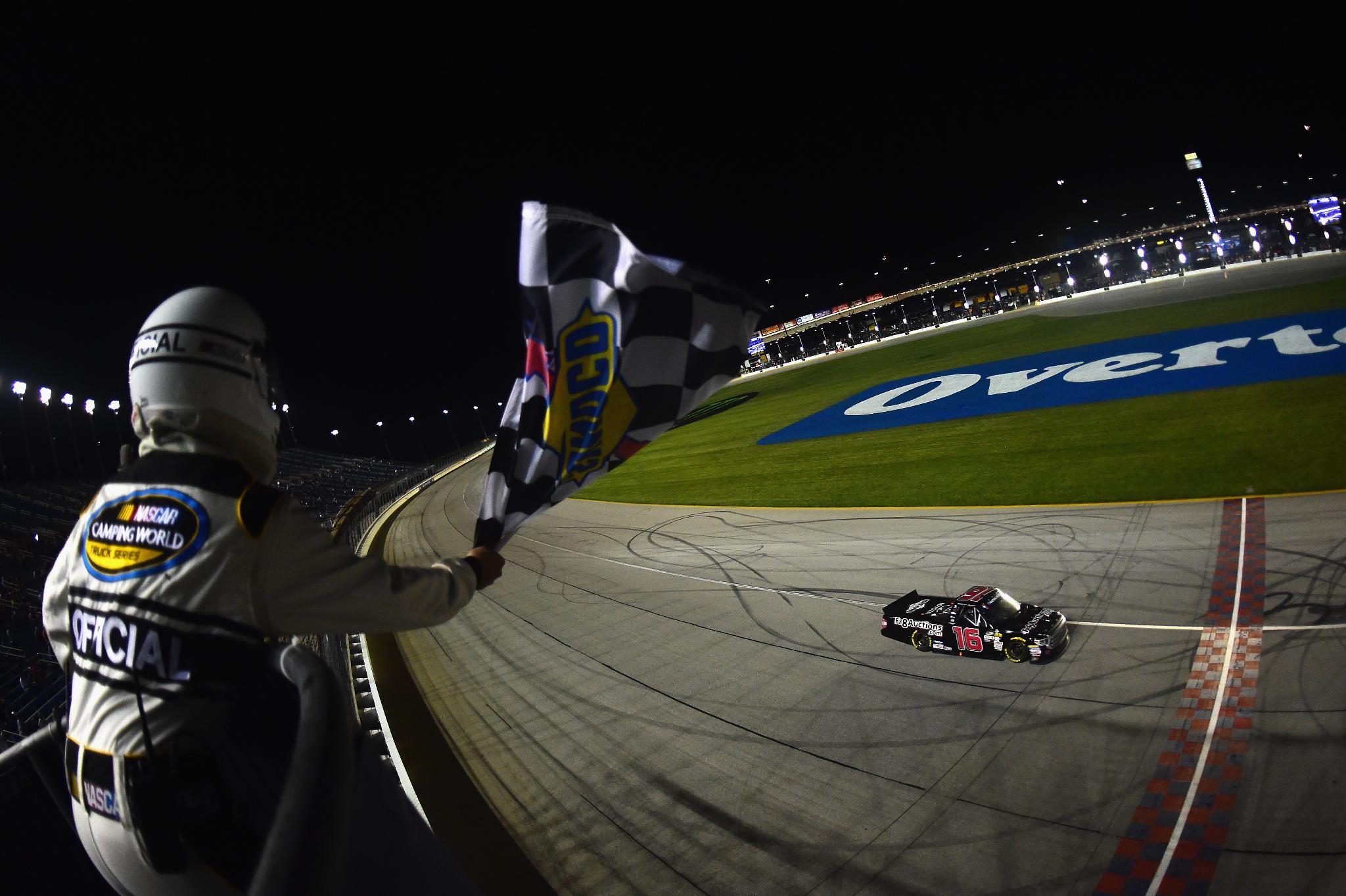 "I'm blowing up!" John Hunter Nemechek shouted over his team radio as he entered Turn 1 with the lead on the final lap at Chicagoland Speedway.

Nemechek's misfortune proved an unexpected boon to Moffitt, who won the race by 5.092 seconds over Ben Rhodes, as Nemechek faded to seventh at the finish – not with a blown engine, as he had thought, but with an empty fuel cell.

Moffit's victory – his third of the season and the fourth of his career – was all the more unlikely because his Hattori Racing Enterprises didn't have the resources to come to the 1.5-mile track until Fr8Auctions.com made a midweek commitment to sponsor Moffitt's Toyota in Friday's race.

"We weren't even supposed to be here," said crew chief Scott Zipadelli.

Moffitt and Nemechek battled through the final 24-lap green-flag run, with Moffitt taking the lead by a nose on Lap 136 of 150. Nemechek regained the top spot on the following circuit, moved his line to the top of the track and began to pull away.

[adinserter name="GOOGLE AD"] When he took the white flag to start the final lap, Nemechek was ahead by roughly five truck-lengths before his fuel tank ran dry and Moffitt sped past.

"This is great," Moffitt said after climbing from his No. 16 Hattori Racing Enterprises Toyota Tundra. "We didn't know if we were coming. To be here in Victory Lane, it's an honor and a blessing.

"These guys work hard. I feel like we threw away a couple of wins this season. I hate it for the No. 8 (Nemechek), whatever happened to him. But we'll take it however we can get it right now."

Moffitt was prepared to try a banzai run on the final lap, as Noah Gragson had tried unsuccessfully to do to Moffitt on June 16 at Iowa Speedway. As it turned out, Moffitt didn't have to.

"I got a good run off Turn 4 as we took the white," Moffitt said. "I committed to what Noah did to me at Iowa. And halfway up the hill (in Turn 1), something happened and they said ‘Just take it easy.' That's a great way to be able to just drive easy through 3 and 4 to win one.

"I can't thank everyone on this team enough and Fr8Auctions that even got us here this week. Tuesday, we didn't even know. They really extended a hand and helped us when we needed it the most."

Nemechek, who is running a limited schedule in both the Camping World Truck Series and NASCAR Xfinity Series, bemoaned the ill fortune that kept him out of Victory Lane.

"We just don't have luck on our side right now," Nemechek said. "Overall, it's a good showing. They knew we were here. We don't know at what point we'll be back with the trucks. It's frustrating and disappointing, but we'll move on from it.

"If we keep doing what we're doing and running like we are, we're going to win races. That's the biggest thing. The results haven't been what we wanted this year on the Xfinity side and the Truck side, but tonight was a real heartbreak."

Johnny Sauter ran third and retained his series lead by 65 points over Gragson, who started from the pole and finished fourth. Brandon Jones completed the top five in the No. 51 Kyle Busch Motorsports Toyota.