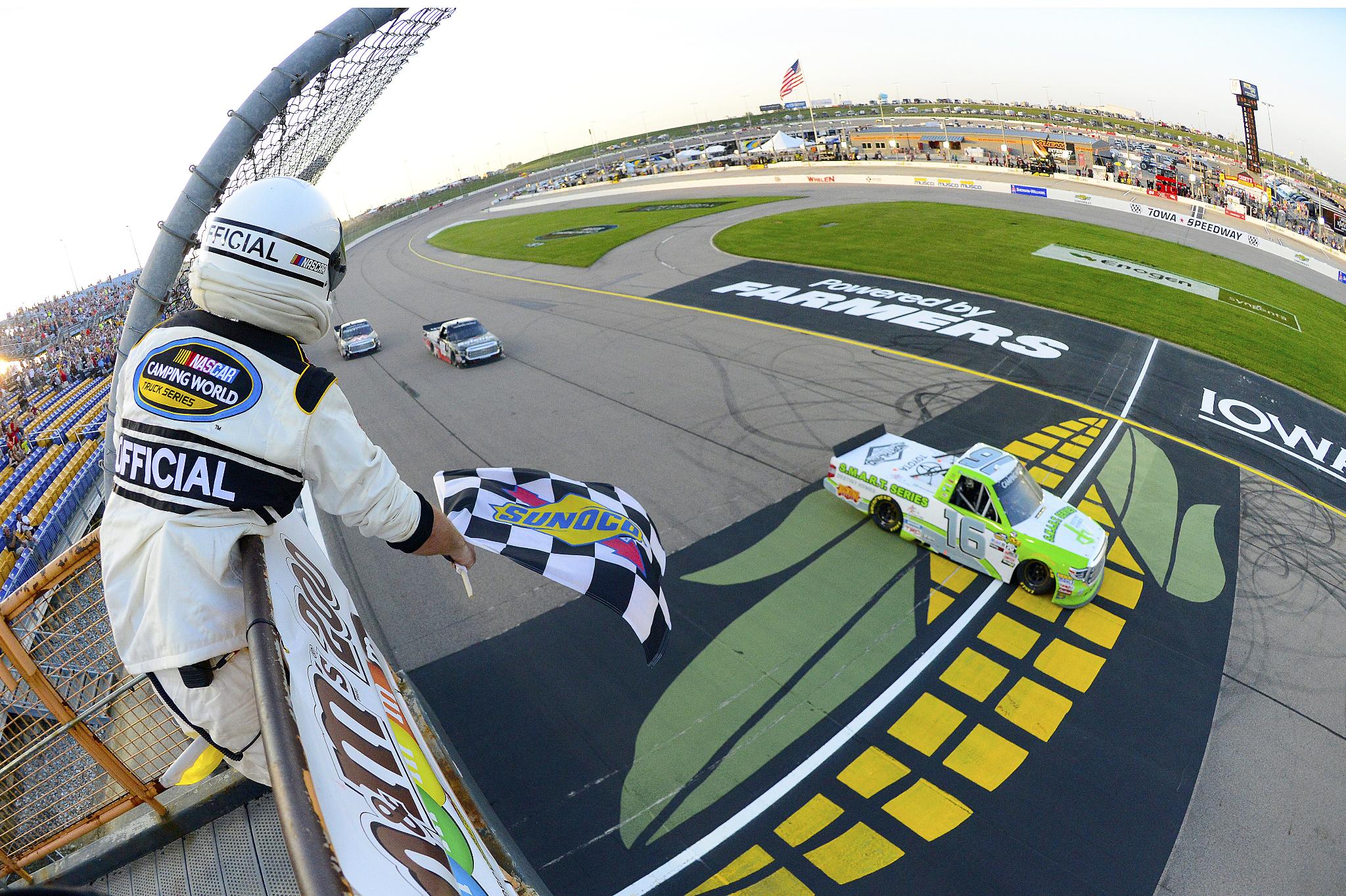 Heat and humidity. Three-wide action. One race-changing wreck – and a rousing triumph for a local favorite.

But once the dust settled and the sun sank low in the sky, a relative sense of calm swept over speedway veteran Brett Moffitt.

Because Moffitt – who grew up on Iowa dirt tracks before climbing NASCAR's ranks – had to hold off a hard-charging Noah Gragson in a furious finish that featured sparks from Gragson's No. 18 after a failed last-gasp slingshot attempt sent him into the wall as the Iowan sailed under the checkered flag.

[adinserter name="GOOGLE AD"] "This is everything," said Moffitt, who led the final 76 laps. "Being in my home state on Father's Day weekend – my dad has done everything for me in my career and been my rock my whole life."

"Video game style racing there," Gragson said. "It's fun racing at this track. I drove it in there. … just overshot a little bit."

There were shots, knocks, and seismic shifts through the three-stage 200-lap event.

Coming out of Turn 4, Matt Crafton's left front tire went flat, causing his No. 88 truck to slide up the track. He then collided with John Hunter Nemechek – last year's race winner at Iowa.

"There's really nothing you can do there," Nemechek said after being evaluated and released from the infield care center. "I hate it for all my guys. … We were really fast."

All four involved in the incident were.

Three of the four had previously led laps before the accident. Crafton paced the field for 20 laps. Nemechek led 15 and won stage one. Friesen ran out front for 48 laps while winning stage two.

None of that mattered as they headed to the garage, though, and Moffitt, of Grimes, Iowa – about a 45-minute drive from the speedway – took the lead at the restart and thrived in clean air as Gragson and Burton eventually chased him down within passing distance.

Moffitt prevailed, though, earning his second win of the season. He also gained ground on Gragson in the point standings. Johnny Sauter – who settled for fifth – leads Gragson by 71 points. Moffitt's another 14 points back and praised his talented, if cobbled-together team that's seeking additional sponsorship to help fund the remainder of the season.

"We didn't know if we were going to Texas and we're still uncertain about Chicago," Moffitt said. "So we really need some more sponsors on this truck."

What was his impromptu Victory Lane pitch, besides winning?

"This is just such a great group of guys," Moffitt said. "Everybody's so passionate. We work really hard. We're not the biggest team but we proved tonight that we're the best. I think we can have some more wins this season and go to Victory Lane a few more times – and more importantly, compete for a championship."