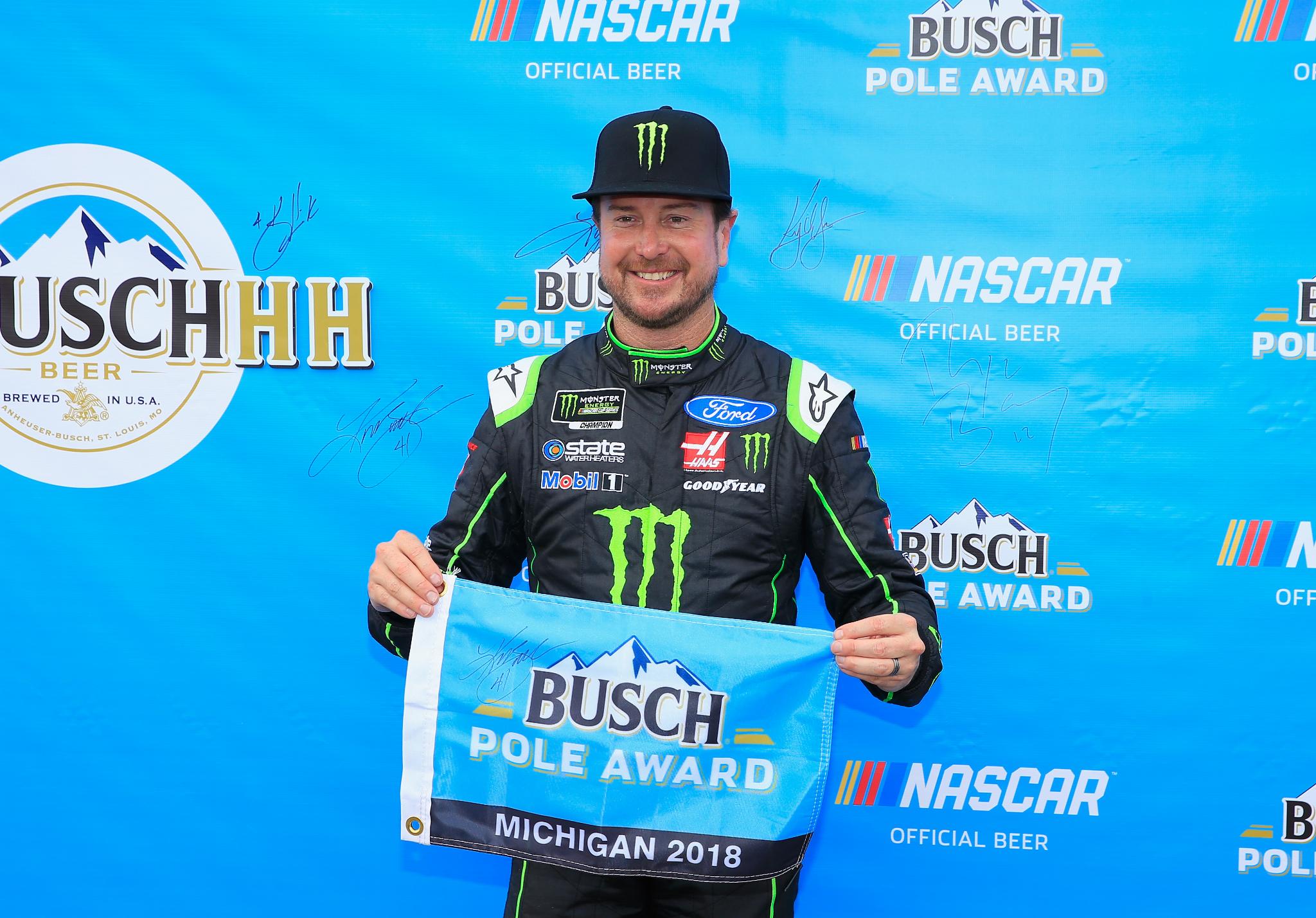 Clearly, Kurt Busch enjoyed the rush of putting his No. 41 Stewart-Haas Racing Ford on the pole on Friday at Michigan International Speedway.

"To go 217 (mph) into the corner-just hauling the mail-I love that feeling," said Busch, who ran his fastest lap of the day at the 2-mile track to earn the top starting spot for Sunday's Firekeepers Casino 400.

"This one is fun, because I could trust the car, and I knew I needed to go after it hard. Watching all the Fords in practice, I knew we had a good shot at it. The guys tweaked on the tires the right amount. It's a new compound, left and right side, and we didn't want to get caught up too much in chasing the tires…

"Now we need to translate that to race speed."

The Busch Pole Award was Busch's second of the season, this third at Michigan and the 24th of his career. Covering the distance in 35.405 seconds (203.361 mph), Busch claimed bragging rights in the back yard of the American auto industry by .034 seconds over fellow Ford driver Brad Keselowski (203.166 mph).

Toyota driver Kyle Busch, a four-time winner this season and the series leader, was the only interloper in the top seven after a final-round lap of 203.120 mph, good for the third spot on the grid behind his older brother and Keselowski.

A major adjustment to the No. 2 Team Penske Ford between the second and third rounds gave Keselowski plenty of speed, but he felt he left some of the extra juice on the track in the first and second corners.

"I think we were right there for the pole," Keselowski said. "I made just a small little mistake in (Turns) 1 and 2 that I wish I could have back. Credit to (crew chief) Paul (Wolfe) and the team. They made some good adjustments the last round (to gain more than .2 seconds).

"That's a pretty big gain. I just didn't quite get all the gain they made on the car out of it, but we have a good starting spot, and it bodes well for the Miller Lite Ford. Hopefully, we can get a good run Sunday."

Harvick was fastest in each of the first two rounds but slowed to 202.954 mph in the final.

"To be honest I didn't really expect everybody to pick up two-tenths," said Harvick, who has five victories in 14 starts this year. "I thought we had a little bit to just keep from trying to screw up but, in the end, I needed to get a little more. It was still a good qualifying effort, so we'll just go from there."

Kyle Larson's quest for a fourth straight Cup win at Michigan hit a major speed bump, thanks to a tight handling condition that persisted throughout opening practice and continued into the time trials.

"Our car has just been pretty far off, I feel like, all day," said Larson, who failed to advance from the first round and will start 26th on Sunday. "It's really tight. I don't feel like I can turn the wheel very far either. I don't know why that is.

"But we've got some smart people in our race trailer and on our race team that will get it worked out. We'll get some laps (in Saturday's practice) and hopefully be better."