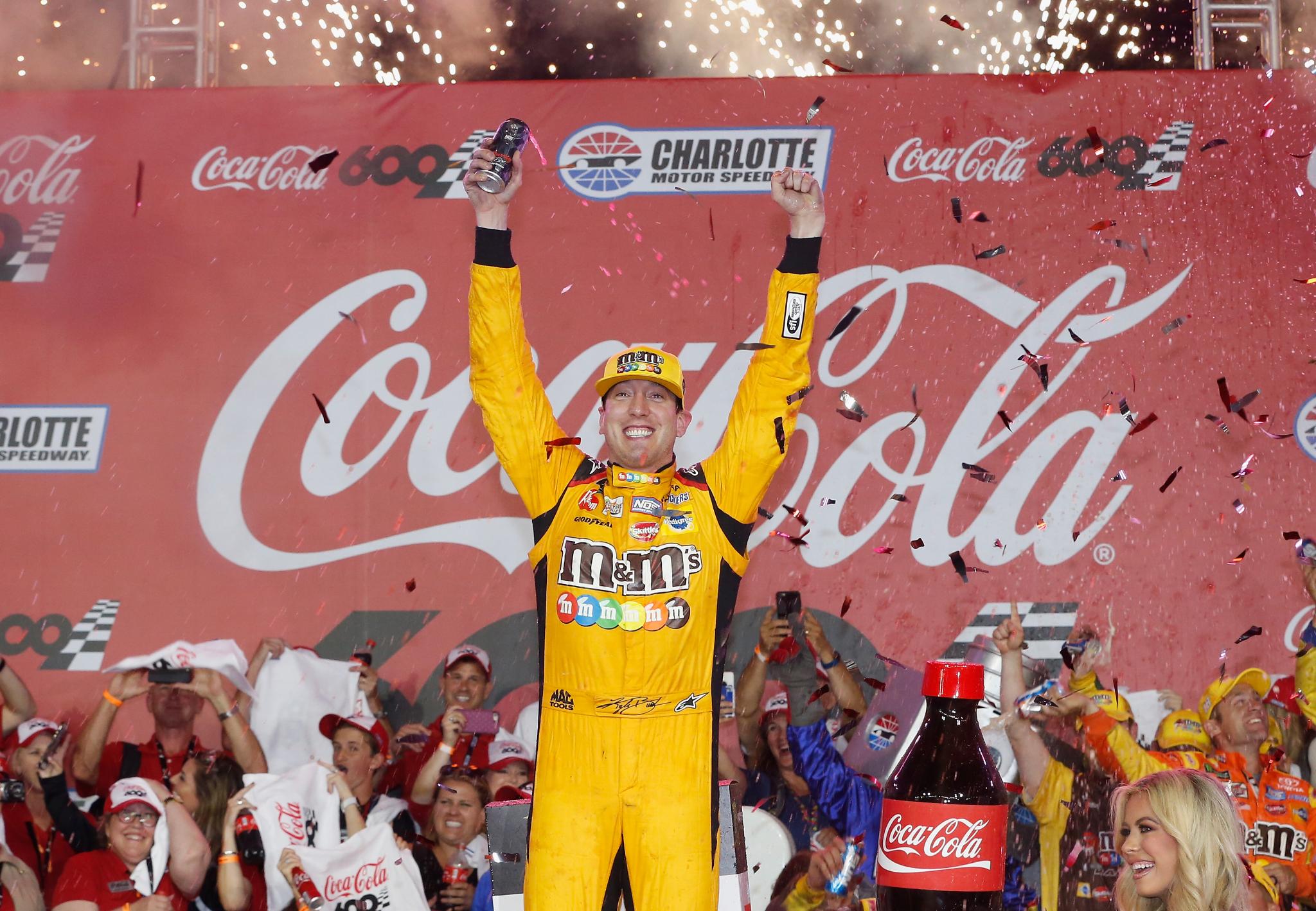 In his 16-year Monster Energy NASCAR Cup Series career, Kyle Busch had tamed every track he'd ever competed on.

Except for one – Charlotte Motor Speedway.

On Sunday night, Busch finally conquered the one track that had eluded him for so long, and he did it in one of the NASCAR's biggest events with a command performance in the 59th running of the Coca Cola 600 to become the first driver in NASCAR history to win a point-paying event at every track he's started at.

It took him 29 starts to do it, but on Sunday, he made it look easy.

Busch started on the pole and won all four stages of the event while leading 377 of the 400 lap distance, and crossed the finish line by better than 3.8 seconds over Martin Truex, Jr. to win his fourth race of the year and 47th of his Cup Series career.

"This one's very special," said Busch of his first Charlotte victory. "I don't think there's anything that can top Homestead, just with the meaning of what the championship is, but the Coca-Cola 600 – I've dreamt of this race since I was a kid and being able to win this race. Always watching the All-Star race and then the 600 the following weekend and being able to come out here and now win the Coca-Cola 600 is just phenomenal. It's a little boy's dreams come true and man."

Busch has had success at Charlotte before – tallying eight Xfinity and seven Camping World Truck Series wins here. He's even collected a Cup Series victory here last year after winning the All Star Race, but had never won a regular points event at the 1.5-mile oval, even though he's come tantalizingly close before.

Busch has finished runner-up at in Charlotte Cup races three times, including last year's race where he finished second to Austin Dillon.

Other years, it's just been bad luck.

In 2009, he led a race-high 173 laps, but ended up sixth after the skies opened up and brought racing to a halt after 227 laps; in 2011, he led twice for 55 laps before a crash with 56 laps to go ended his night. Then in 2013, his car suffered damage from a broken cable from a FOX overhead camera and eventually dropped out of the race, finishing 38th.

All that bad luck was certainly on Busch's mind as the final laps clicked down.

"When you're running down those last 40 laps or whatever, it's just, ‘what's going to happen, what's going to go wrong?'", said Busch. "You're basically hoping that none of the other cars hit the wall or nobody spins out or nothing stupid happens in order to cause a caution because you have a decent-sized lead. You just want to hold that.

"I knew I was kind of giving up a little bit of lap time and Martin (Truex, Jr.) was kind of closing on us a little bit there when we were getting through traffic. But when you have a lead like that, you've got to take care of your car. You've got to take care of the situations you put yourself in, and so that's what we were doing there. Our car was phenomenal all night long. We just didn't want to force any issues there with it late in the going, and if there was anything that kind of would cause a late dash for cash, if you will, that we were ready to go for it."

Busch was perfect on each restart and his crew was flawless on pit road – Busch came in the leader and left the leader at the beginning and end of each segment. The only time anyone else was able to lead a lap was in between green flag pit stops.

Truex, Jr. seemed to be the only driver with a chance to catch him in the closing laps, knocking Busch's lead from more than six seconds down to just over three seconds in the final 30 laps, but simply ran out of time to track him down.

"Maybe with a yellow, yes," Truex said when asked if he could have caught Busch. "I don't know if it went green, I just don't know. I think we were definitely catching him. Seemed like every time we'd pit under green, we were faster for 20 laps. I don't know if that's him taking care of his tires because he had such a big lead, because at the end of the long runs he was faster. If it had went green there's no telling. He may have just maintained that gap. I really have no idea to be honest.

"At the end of the day, we ran second. He kicked everybody's tail. That's just the way it goes. That's how it is."

Denny Hamlin finished third in the event, followed by Brad Keselowski. Jimmie Johnson finished fifth for his best result of the season.

NASCAR All Star Race winner Harvick – an early favorite to win the event – rallied from starting at the back of the field to work his way all the way up to fourth before cutting down a tire on 85 and smacking the wall, ending his night with a 40th-place finish.

"The car was really, really fast. We came all the way through the pack and made it up into the top three there and sometimes those things happen," said Harvick. "I can't complain about anything that's happened this year. We have to take the good with the bad."

How special is winning this race for you?

"This one's very special. I don't think there's anything that can top Homestead, just with the meaning of what the championship is, but the Coca-Cola 600 – I've dreamt of this race since I was a kid and being able to win this race. Always watching the All-Star race and then the 600 the following weekend and being able to come out here and now win the Coca-Cola 600 is just phenomenal. It's a little boy's dreams come true and man, I just want to say that I thank NASCAR, for one, for giving me a chance to come out here and have this opportunity to race for my dreams and to accomplish those things. I don't know if it's ever been done before, but the first one to check off all the tracks and get it all done. I don't want to go to any new ones. That would just have to start the whole process over, but holy moly, I can't say enough about M&M's. Love the red, white and blue scheme and what it means. All of our heroes, whether they're fighting for us right now or whether they're fallen heroes, certainly want to give remembrance to (SGT) Eric Toth who's with us and who is riding on our car tonight and his family who are with us here this weekend. That's very very special. Appreciate NASCAR doing that with NASCAR Salute the troops. Can't say enough about M&M's Red White and Blue, Interstate Batteries. This Toyota Camry was awesome tonight. Adam Stevens (crew chief) and all my guys are just phenomenal to work with and it's so much fun right now. This NOS Energy Drink is going to keep us rolling for a long time tonight, that's for sure. Also want to thank Cessna and Rheem and DVX Eyewear. Of course the fans. The fans for coming out here and supporting us all through all this. Man, Black Clover, DVX Sunglasses. I don't know who else I'm forgetting. I'm sorry. Man, this is so huge."

How does it feel to get your first win in a points event at Charlotte Motor Speedway?

"It feels amazing. Man, there's no greater feeling than winning this race. I've dreamt of this race since I was a kid and being able to come and get to victory lane with the Coca-Cola 600 is just awesome. I can't say enough about M&M's Red White and Blue. Everybody on this car. Adam Stevens (crew chief). All my team. Everybody that's done such a phenomenal job of preparing such a fast race car. It was glued to the race track anywhere I wanted to go, she wanted to go, so that was really awesome. You don't have cars like that very often. Really want to thank Interstate Batteries, Toyota, NOS Energy Drink, Cessna, Rheem, DVX Eyewear, Black Clover and of course, the fans. It may have been a little unaction-packed at the front of the field, but I tell you what, it was plenty exciting with nerves from my vantage point and certainly want to give a shoutout to Rowdy Nation and everybody that's pulling for us all the time and don't take no crap from all the haters and everything else. You guys are awesome. This one is for all of us."

Your team came through flawlessly tonight, didn't they?

"Yeah, my guys were on it tonight. They were certainly really really good on pit road. I can't say enough about my crew. They've been that way all year long. You know a lot of wins are due to a lot of circumstances going right and certainly we've got the pit crew going right with us right now. Fast race cars as well too. There were a few other fast cars out there I was keeping my eye on as they were coming up through the field. The 4 (Kevin Harvick) for one, the 78 (Martin Truex Jr.) for another and it just seemed like they could never really get into our territory, but you know all in all just a phenomenal night."

First driver in the modern era to win at every active track, what does that mean to you?

"It's awesome. I mean I've dreamt of that – not only winning here and winning the Coke 600 as a kid and being in victory lane here for this race, but to just be a force that people got to be reckoned with, you know. I go across the country and race Super Late Models because I want to win at every single race track. I just want to show that there is no weakness. My guys have given me that chance here tonight and being able to get to victory lane with this M&M's Toyota – it sure looks pretty in victory lane here tonight. I definitely want to give a shoutout to all of our men and women, all the service men and women across the world past and present, fallen and of today's heroes – we had (SGT) Eric Toth with us here and his family riding along with us this weekend, so that was a pleasure. Got to meet up with them earlier and spend some time, so that was really cool."