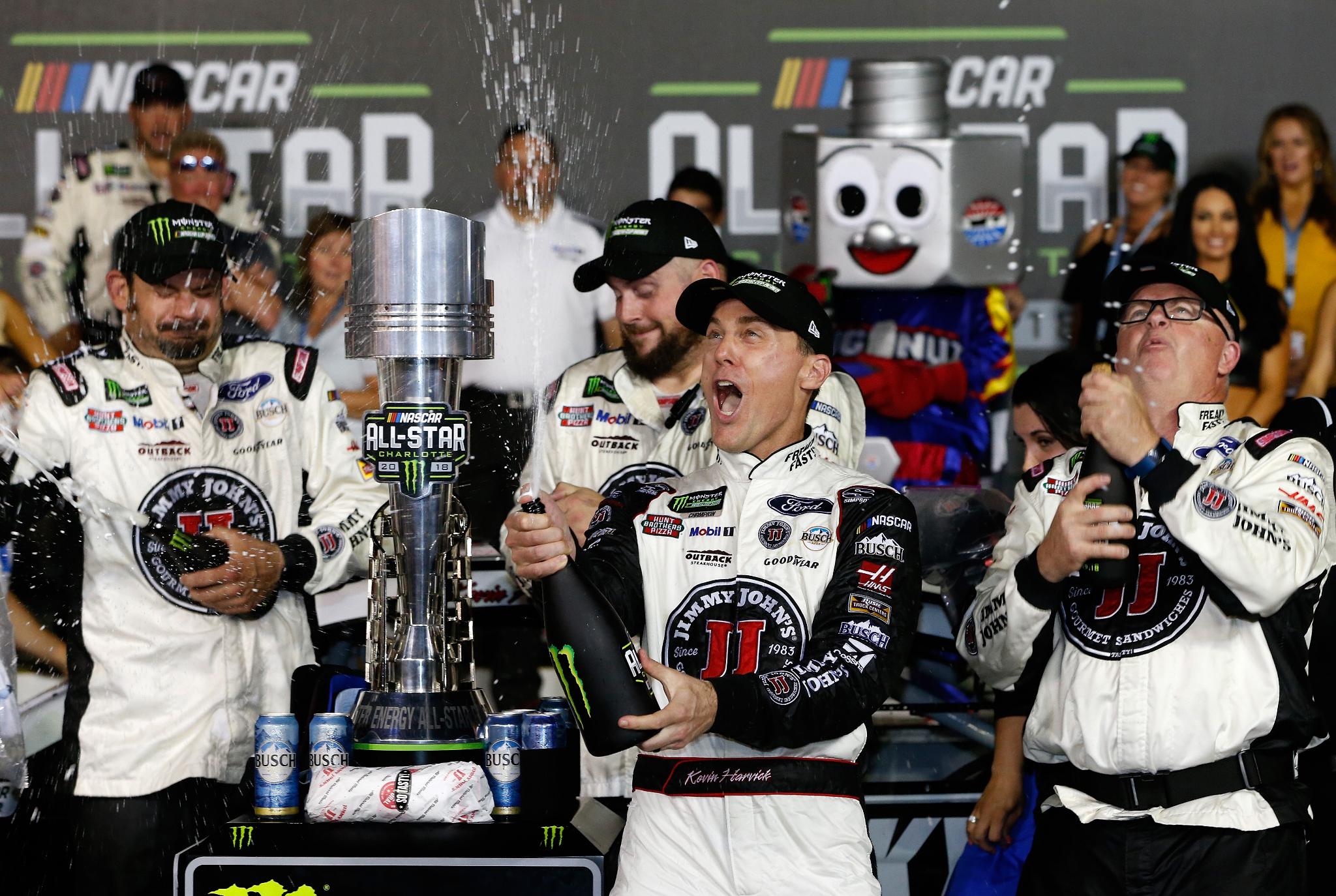 On Saturday night, the "Closer" became the "Million Dollar Man" as Kevin Harvick powered his way through a final green-white-checkered overtime finish to win the Monster Energy NASCAR All Star Race for the second time in his career.

Harvick held off a furious charge from Daniel Suarez over the course of two final restarts in the fourth and final segment, for his first all star race in 11 years.

Suarez, who transferred into the 21-car field after winning the second segment on the Monster Energy Open, finished second in his second-career All Star Race. Joey Logano was third, followed by Denny Hamlin and Chase Elliott.

Harvick won three off the event’s four stages, only missing out on the second stage which went to Kyle Busch, leading 36 of the event’s 93 laps.

It was the sixth win overall this season for Harvick and the second-career All Star Race victory for Stewart-Haas Racing.

"Everything's going our way," said Harvick. "We have really fast race cars. Everybody is executing. Our pit crew rebounded and made up spots after that first stop. That's what you want out of an experienced race team. When something goes wrong, you have to be able to overcome it and refocus. That to me is more important than the money because everybody puts so much time into it. There is nothing better than seeing them all high-five each other in victory lane."

[adinserter name="GOOGLE AD"] Harvick topped the first 30-lap segment after passing Ricky Stenhouse, Jr. on a restart following the first caution flag on lap five and quickly pulled away to open up a half-second lead by the time he claimed the green-checkered flag to win the stage over Martin Truex, Jr., Kyle Busch, A.J. Allmendinger and Joey Logano.

Kyle Busch won the race off pit road and led the field to the green flag for the start of the second, 20-lap segment, but Truex stormed to the front with a push from Jimmie Johnson to lead the opening lap of the stage. Busch and Suarez fought back and double-teamed Truex to push Kyle Busch back to the lead, with Suarez taking second.

Once out in front, Kyle Busch was untouchable and won the easily won the second stage, with Truex taking second ahead of Suarez, Kyle Larson, Truex and Elliott.

The field came to pit road under the ensuing caution, with Brad Keselowski winning the race out of the pits with a two-tire stop to take the lead for the restart in the third, 20-lap segment.

Keselowski got a good jump on the restart but ultimately his two-tire strategy was no match for cars with four fresh tires and Truex made his way around Keselowski on the outside on lap 55.

With two laps to go in the stage, Alex Bowman spun and backed into the wall, pushing the stage into overtime with Larson taking over the lead.

Back under green in the overtime session, Hamlin pushed Suarez to the front and the two Joe Gibbs Racing teammates worked to hold off Larson, who attempted to force a three-wide pass for the lead on the high side when the caution flag waved yet again for the biggest crash of the night.

Fighting three wide for eighth place, Stenhouse got into the left-rear of Truex and spun the No. 78 Toyota, touching off an eight-car crash than took out Keselowski, Clint Bowyer and Kurt Busch.

The crash set up yet another green-white-checkered overtime to end the segment, with Hamlin and Suarez restarting side by side, but this time, Larson tried the low side and this time got past Suarez and pushed his way past Hamlin for the lead.

While Larson, Hamlin and Suarez diced it up for the lead, Harvick roared up from fourth place on the high side and blasted past both Larson and Suarez on the final lap to win the stage by half a car length over Suarez.

Harvick’s bold move put him at the head of the field for the start of the final segment – a 10-lap dash for the cash – and Harvick wasted little time moving out to a four car-length lead over Suarez, but a final caution flag for a spin involving Larson and Logano sent the final segment into overtime.

On the final three-lap shootout, Suarez got a good jump on Harvick with his teammate Hamlin directly behind him, and appeared to have him cleared coming through the backstretch, but Harvick edged ahead with a push from Logano.

Suarez continued to surge, but found himself fighting side by side with Logano for second place which allowed Harvick to pull away for a five car-length lead at the checkered flag.

"I thought on that last restart that my best opportunity was Logano. He is one of the best on the restarts," said Harvick. "I knew he would work with me as good as possible because that is just the way that most of us do it from Ford. We were able to just stay even through one and two and I really thought once we got to the back stretch we could clear him. I didn't want to be on the bottom. I didn't feel my car was stable enough to be under someone when they were on my right side. I had to take my lumps through one and two and hope that the guy behind me was still with me when we got to the exit of two and we were able to win.

"We needed to be in control of the race to have a chance at winning. If we were third or fourth we would have been in big trouble. We needed to be on the front row with clean air because that is the only chance our car would handle good enough. It was so fast."

Suarez, who had transferred from the Monster Energy Open in the All Star field along with Allmendinger, Bowman and Elliott, thought he had a shot to catch Harvick on the final restart, but found he didn’t get enough of a push from his teammate to make it work.

"The 11 (Hamlin) was doing a very good job as much as he could to push me," Suarez said. "For whatever reason, he just disconnected a little bit, and I couldn’t keep the run with the 4 (Harvick) and the 22 (Logano).

"They stayed connected for the entire corner, and after that I knew it was going to be tough. After that, I started just playing defense. I tried to slow them down, and I just didn’t do a good job or I just couldn’t do it enough."