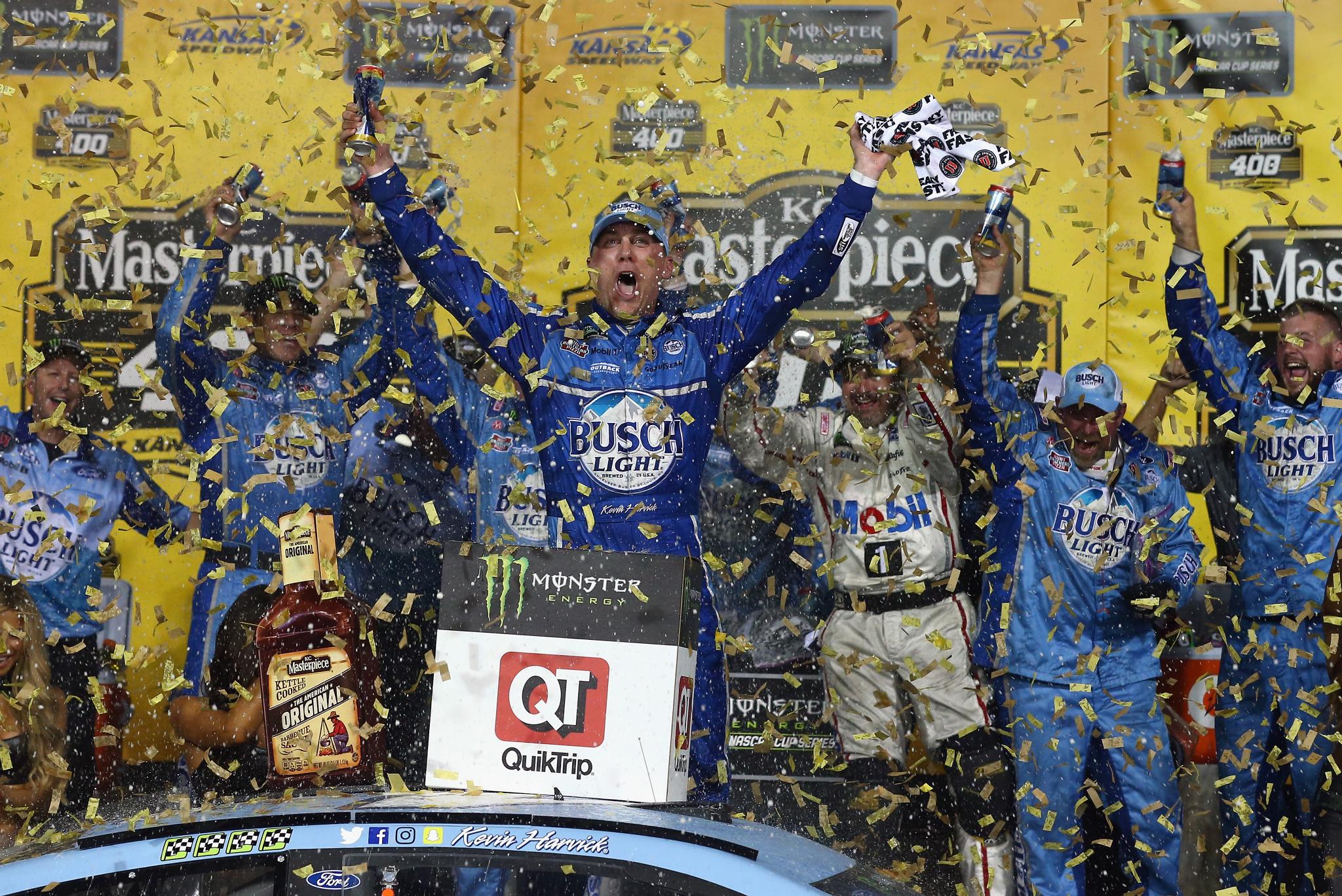 Charging from sixth place and chasing race leader Martin Truex Jr. after a restart on Lap 259 of 267, Harvick found speed in the top lane with five laps left and passed Truex on the outside through Turns 3 and 4 on the penultimate lap.

In winning his second straight race and his fifth in 12 starts this season, Harvick beat Truex to the finish line by .390 seconds. The victory was Harvick's third at Kansas Speedway, tying him for most ever at the 1.5-mile track.

"I think, as you look at the last couple of laps, it wasn't working for me on the bottom, and I was able to make up some ground on the top," said Harvick, who will try to win three straight races in the No. 4 Stewart-Haas Racing Ford for the second time this season when NASCAR's top tour goes to Charlotte for the May 27 Coca-Cola 600.

[adinserter name="GOOGLE AD"] "I thought, if it came down to it, I could pass him on the bottom, because my car went through (Turns) 1 and 2 on the bottom, or I could drive through the middle of 3 and 4, but I just had to pick which lane. He wasn't going to choose, and he never chose the high lane, and we were able to drive right by."

Having taken the lead by staying out on older tires after a caution for an accident involving Kyle Larson and Ryan Blaney on Lap 248, Truex thought he could keep Harvick behind him over the closing laps. That proved not to be the case.

"I thought we were going to be all right there," said Truex, who was trying for a third straight win at Kansas. "Like three or four laps to go, my car just got real tight, and I chattered the right front off of Turn 4, and I was like, ‘Oh boy, that's not good.'

"We had been so tight all night, and I didn't know where to go once he was getting there. If I go to the top, he's just going to catch me on the bottom. I might as well run where I feel I can run the fastest, and I did, and it just wasn't enough."

The most violent accident of the night set up the final restart with nine laps left and the dramatic pass for the victory. In Turn 4 on Lap 253, William Byron got loose underneath Clint Bowyer's Ford and knocked Bowyer up the track. Byron's No. 24 Chevrolet slammed into the outside wall with a bone-rattling impact that lifted the rear of the car off the pavement.

Byron's car landed on the hood of Ryan Newman's Chevrolet and slid down the track with fire in the engine compartment. All told, seven cars were involved in the wreck, including the No. 6 Ford of Matt Kenseth, who finished 36th in his first race of the season.

Byron was shaken but otherwise unhurt after the multicar wreck.

"Yeah, that one hurt really bad," Byron said. "But I'm fine. We took two tires there and couldn't get it turned on the bottom and then got sucked around at the last minute. I just should have been lower on the track than that. "Just couldn't rotate. Couldn't cut. I think, overall, we were trying to kind of push some things there and it just didn't work out. That was definitely the hardest hit I've been in. But I'm thankful to be walking, so that's good."

Joey Logano ran third, followed by Larson and Denny Hamlin. Larson made a remarkable recovery after he and Blaney made contact in Turn 1 on Lap 248, when Blaney was trying to side-draft aggressively. Blaney, who led 54 laps before the accident, slammed into the Turn 1 wall and exited the race.

But Larson continued, and he took on fresh rubber under the final caution and charged through the pack to fourth place.

"Blaney was side-drafting really hard, and I was as high as I could get, and we made contact, whatever, and we had a bunch of damage," said Larson, who won the second stage and led a race-high 101 laps to Harvick's 79. "So I hate that we didn't turn today into a win, but it's satisfying to see how much speed our car had tonight.

"And, it's definitely good to show that Chevy has a lot of speed, at least in the No. 42 team. So we'll just keep working hard and try to get as fast as the No. 4."

Paul Menard, Erik Jones, Kurt Busch, Aric Almirola and Kyle Busch completed the top 10. Kyle Busch retained the series lead by 12 points over Logano in second place and 19 over Harvick in third. Brad Keselowski (14th on Saturday) is a distant fourth, 107 points back.