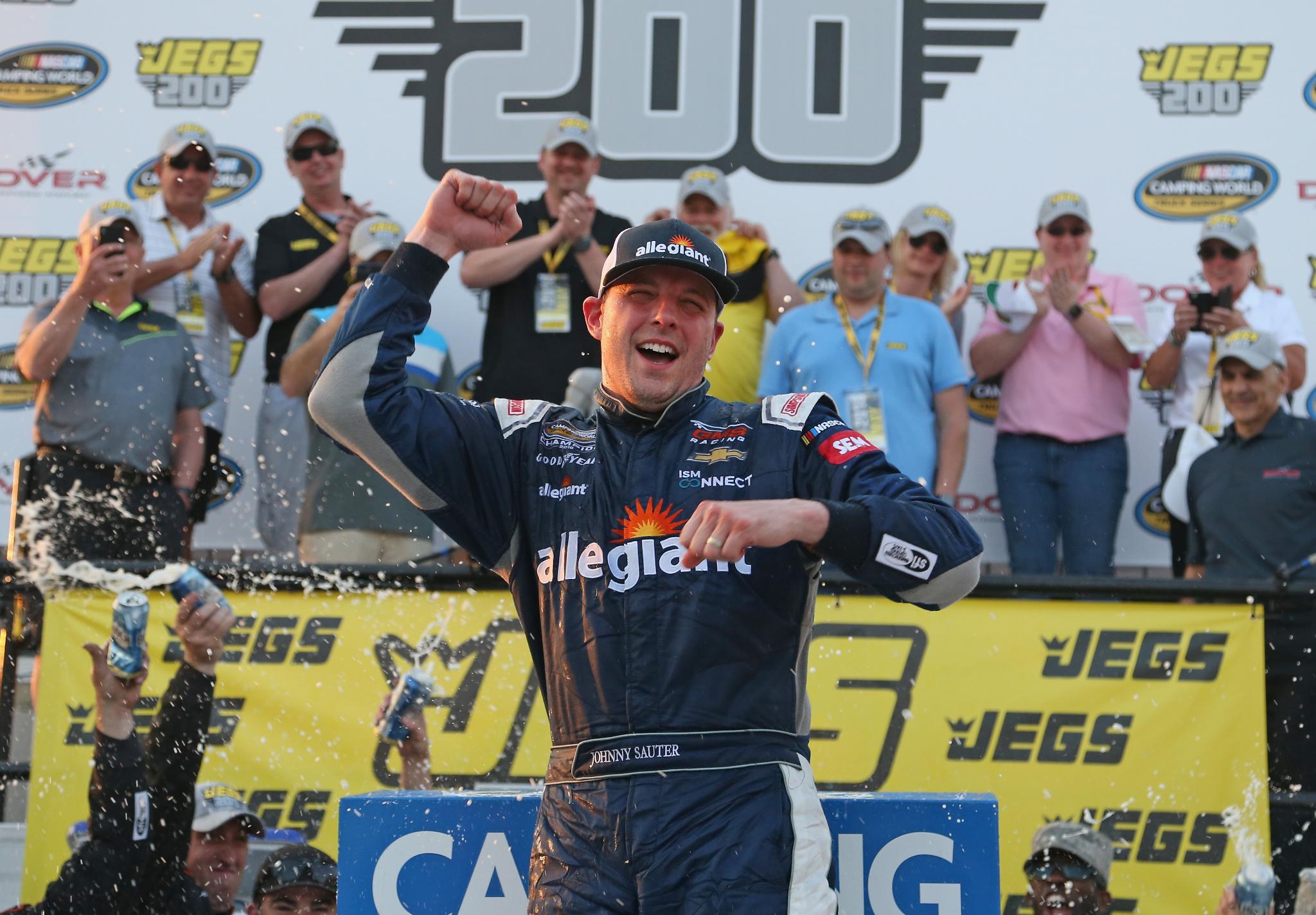 After what had happened moments earlier, Johnny Sauter's victory in a two-lap overtime shootout seemed almost routine by comparison.

Sauter, who turned 40 on May 1, held off fellow 40-something Matt Crafton to win Friday's JEGS 200 NASCAR Camping World Truck Series race at Dover International Speedway-but not until Sauter won an intense struggle against pole winner Noah Gragson, whose race ended on the next-to-last lap of regulation when his No. 18 Toyota backed hard into the outside wall.

The victory was Sauter's second straight at Dover, his second of the season and the 19th of his career. And it came during a bittersweet week for GMS Racing, after Spencer Gallagher, the son of team owner Maury Gallagher, won his first NASCAR Xfinity Series race at Talladega and on Tuesday was suspended indefinitely for a violation of NASCAR's substance abuse policy.

"Tough week for the Gallagher family-this one's for Spencer," Sauter said. "He's a smart kid, and he'll get it right."

[adinserter name="GOOGLE AD"] Gragson grabbed the lead from Sauter one circuit after a restart on Lap 188 of a scheduled 200, but Sauter wasn't finished. With six laps left, Sauter got a strong run to the outside, but Gragson cut him off, and Sauter's No. 21 Chevrolet tapped the wall.

"We had to work for this one today," Sauter said. "Noah, I had a good run on him there, and he squeezed me off. And I was like, ‘He just gave me the green light to be aggressive.' This was just hard racing right there."

The drivers were racing side-by-side for the lead coming to the white flag when Gragson's attempt to side-draft Sauter's Silverado went awry. Gragson lost control and crashed, destroying the rear end of his Kyle Busch Motorsports Tundra.

Gragson, who won't turn 20 until July 15, was disconsolate when he left the infield care center after the wreck.

"Not the way I try to race people. I take full responsibility in that right there. It was a hundred percent my fault. It's just unacceptable on my part. Man, I was so close to winning. All I can think about is just the mistake I made. I really wanted to get that monster (trophy). This is such a bad-ass track, and not to be able to get it done… I'm just devastated."

After Gragson's wreck and subsequent cleanup, the race restarted on Lap 209. Crafton got an excellent restart and held his own against Sauter through the first two corners but couldn't clear him. Sauter then pulled out to a two car-length lead and took the checkered flag a lap later.

"We just did not have short-run speed," said the 41-year-old Crafton. "For whatever reason, it would just not fire off. I had a really good restart there at the end, and I moved him up as far as I could. I was waiting for Stevie (Reeves), the spotter to tell me, ‘Clear, clear.' I knew I was close, real close.

Sauter extended his series lead to 51 points over second-place Rhodes and 58 over third-place Gragson.