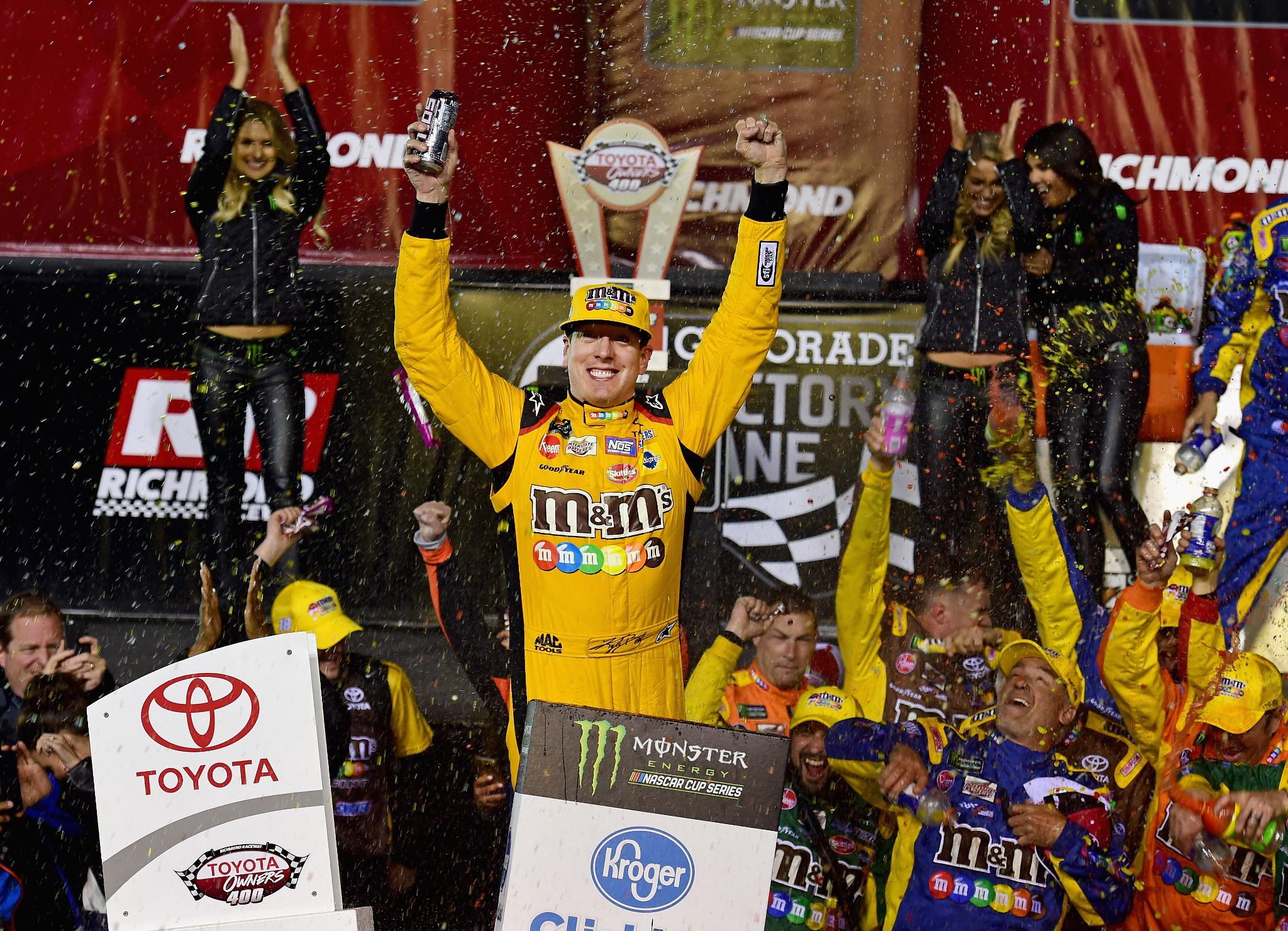 The driver of the No. 18 Toyota got what he needed late in Saturday night's Toyota Owners 400 at Richmond Raceway-cautions and short runs in the final 40 laps-to win his third straight Monster Energy NASCAR Cup Series race, matching Kevin Harvick's feat from earlier in the season.

Busch streaked away from the rest of the field on a series of late restarts, ultimately beating Chase Elliott to the checkered flag in overtime to record his fifth victory at the .75-mile short track and the 46th of his career, tying him with NASCAR Hall of Famer Buck Baker for 15th on the all-time list.

Pit stops were a crucial aspect of Busch's victory. Under caution on Lap 370 for a chain-reaction accident involving Jamie McMurray and Ryan Newman, Busch's crew got the No. 18 Toyota Camry off pit road first and repeated the feat on Lap 391 after David Ragan's spin in Turn 3 slowed the action for the fifth-time.

"I think the difference for us tonight was just the adjustments (to the car)," Busch said. "Trying to stay with the race track all night long. (Crew chief) Adam Stevens and my guys did a phenomenal job. I think one of the other keys to the night was just my guys – my pit crew. They got us out front when it mattered the most those last two pit stops. They were awesome tonight on pit road."

[adinserter name="GOOGLE AD"]Busch started 32nd after a conservative qualifying strategy backfired. That was the deepest in the field a winner had ever started at Richmond. Clint Bowyer held the previous mark, winning from 31st in 2008.

But can Busch win four straight, when the series moves to Talladega next weekend? That's a tall order, given the vagaries of restrictor-plate racing.

"It's definitely cool we've won three in a row," Busch said. "We did it a couple years ago, and now I don't know if you can shoot for four in a row. It's hard to go to Talladega with that much of a winning streak and think that you can go to Victory Lane, but we're going to go there anyway and give it a shot.

"We'll see what we can do… I think it's easier to win the Power Ball than to win at Talladega."

Elliott finished second for the eighth-time in his career, improving from seventh to second over a succession of restarts, passing Denny Hamlin for the runner-up spot after a Lap 401 restart in the NASCAR Overtime.

"Yeah, just very fortunate circumstances there at the end for us, with the way the restarts went," Elliott said. "Having a short run there at the end was definitely in our favor. So it was nice to be on the good end of things for the first time in a while.

"Looking forward, we have to be realistic about how we ran tonight. I think the result shouldn't weigh into how hard we worked this week because we have some work to do. I think that we have to keep that in mind."

Hamlin held third, followed by Joey Logano, who won both the first and second stages before the handle on his No. 22 Team Penske Ford Fusion deteriorated slightly after the sun set. Kevin Harvick ran fifth, overcoming a penalty when one of his crewmen threw pit equipment across his No. 4 Stewart-Haas Racing Ford Fusion during a stop under caution at the end of Stage 1.

Johnson came from oblivion to run sixth after brushing the outside wall early in the race, losing a lap on the track and suffering through a lengthy pit stop that sent him to the back of the field. Kyle Larson, Brad Keselowski, Clint Bowyer and Daniel Suarez completed the top 10.

Notes: Winning three straight Cup races isn't a novel experience for Kyle Busch, who scored back-to-back-to-back victories at Kentucky, New Hampshire and Indianapolis after missing the first 11 races of the 2015 season because of injury. Busch went on to win the series championship that year… Fords dominated the action early, taking the first three positions in Stage 1 and the top four in Stage 2… Pole winner Martin Truex Jr. battled Busch for the lead late in the race, but a problem with the jack on the left side of his car on the final pit stop cost him nine positions. He finished 14th.

What does it feel like to be in victory lane for your third consecutive time?

“All these guys – everybody on this whole M&M Camry, they do a great job for me. I can’t say enough about Adam Stevens (crew chief) and my guys and the pit crew tonight. They won this race for us. They got us off pit road first those last two times that we came down for tires and got us where we needed to be. In case anybody is wondering why this car is so many different colors this week, it’s for the M&M’s Flavor Vote. So, anybody can go and vote for their favorite flavor of M&M’s so there’s Mint and Expresso or Raspberry and then those flavors will be in stores this summer. It’s a pretty cool deal that M&M’s does every year and gets new flavors out to the market. I can’t say enough about this Toyota Camry. It was just awesome today. Out front all day long. I want to thank DVX Sunglasses, Rheem, Interstate Batteries, Cessna, NOS Energy Drink and all of the fans. This is really cool for as good as the crowd was tonight. Really cool out here in Richmond, really chilly but otherwise it was a fantastic evening so hopefully everybody enjoyed that."

How cool is it to win three races in a row?

“It’s definitely cool we’ve won three in a row. We did it a couple years ago and now I don’t know if you can shoot for four in a row. It’s hard to go to Talladega with that much of a winning streak and think that you can go to victory lane, but we’re going to go there anyway and give it a shot. We’ll see what we can do. Our guys are amazing. They’re awesome every week and I love racing with these guys and Joe Gibbs Racing. Everybody at TRD (Toyota Racing Development) Costa Mesa, I appreciate you guys. I think this is the first Toyota to win the Toyota Owners 400 if I’m not mistaken, but if I’m not congratulations to the last guy but I’m pretty happy to be here tonight."

What was the difference for you in the end of the race that got you here to victory lane?

“I think the difference for us tonight was just the adjustments. Trying to stay with the race track all night long. Adam Stevens (crew chief) and my guys did a phenomenal job. I think one of the other keys to the night was just my guys – my pit crew – they got us out front when it mattered the most those last two pit stops. They were awesome tonight on pit road. I’m really excited to be in victory lane at the Toyota Owners 400. I can’t say enough about Toyota, M&M’s and everybody that works on this car. Interstate Batteries, NOS Energy Drink, Cessna, Black Clover and the fans of course. I appreciate the fans. This was a great evening of racing. I hope everybody enjoyed it. It was a lot of fun and great to see such a good crowd out here tonight. I don’t know man. Just cool to get M&M’s back here in victory lane."

How were you able to make your way through the field early in the race?

“The first run of the race we actually made really good ground. I was really happy with the way our car took off there at the beginning of the race. As the night kind of wore on we just didn’t quite have that advantage to everybody. Everybody kind of gained and got a little better and we made some adjustments and changes to the car in order to try to help ourselves and it seemed to be better there. Then, the last couple runs were just short runs. Adam (Stevens, crew chief) and the guys making the right adjustments to the car to have it faster on the short run was where it was at."

Have you ever had this much momentum in your career with three straight wins and seven consecutive top-three runs?

“No, and you know I certainly would love to be doing this if this was week 10 of the playoffs we’d be talking about something pretty cool, but I hope it’s not peaking too early. Obviously this is way early in the season. We’ve got a long way to go. These guys are hungry and warmed up and ready to rock."