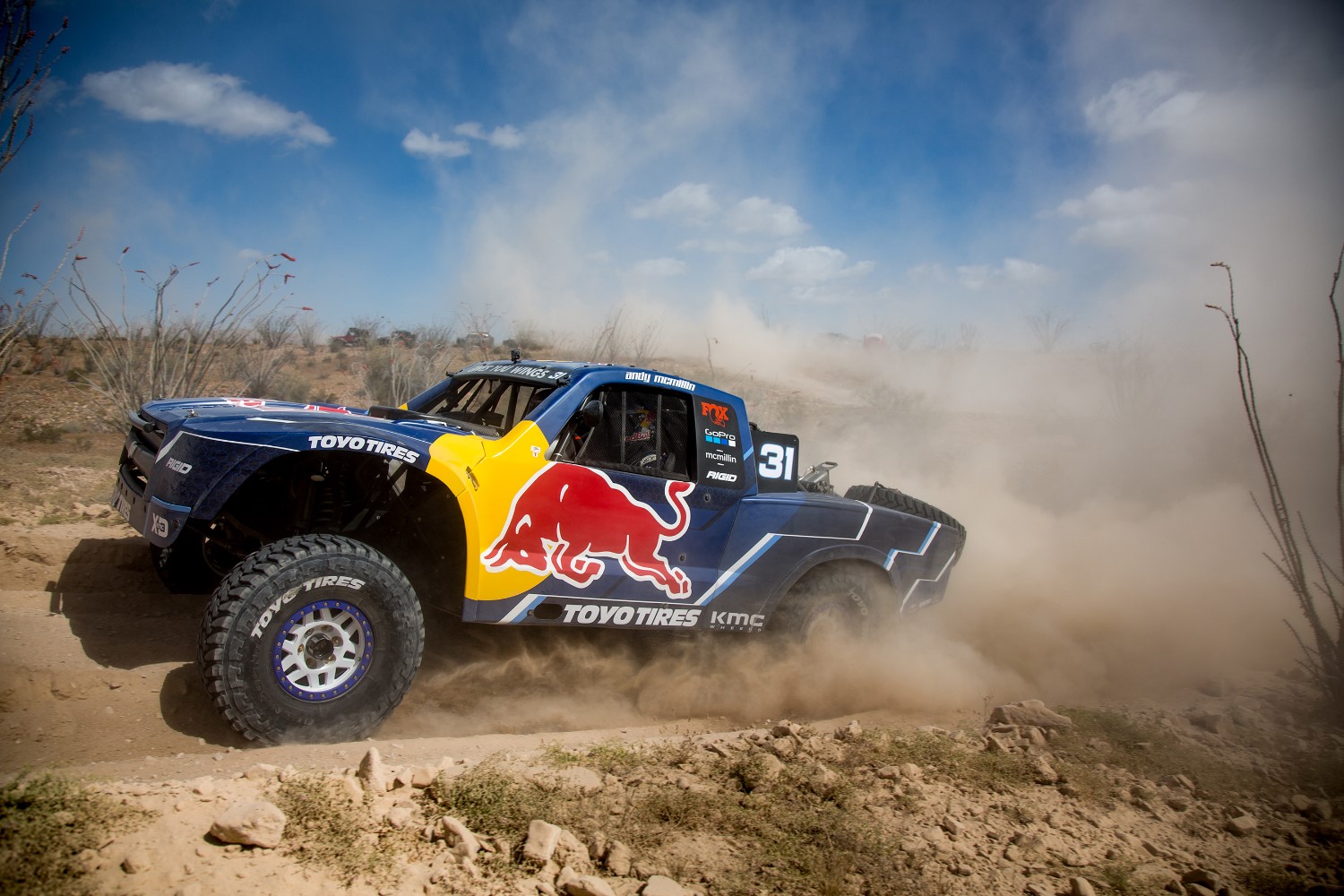 Coverage of the four-race 2019 SCORE World Desert Championship concludes on ESPN2 this Monday with a replay airing of the BFGoodrich Tires 52nd SCORE Baja 1000, presented by 4 Wheel Parts. The one-hour special will be broadcast on the World of X Games show on ESPN2 on Monday (Jan. 13) at 10 p.m. PT.

Check local listings to confirm the time in your area.

Hosts of the World of X Games shows from the season finale of the 2019 SCORE World Desert Championship are SCORE champions and Off-Road Motorsports Hall of Fame racers Cameron Steele and Ricky Johnson.

Co-producing the TV shows with SCORE has been award-winning BCII TV of Los Angeles. Bud Brutsman is the executive producer.

When the final checkered flag fell, a total of 264 vehicles left the start line early Saturday (Nov. 23) with racers from 39 U.S. States and 22 countries. When the course closed at 11:27:28 p.m. PT on Sunday (Nov. 24), there were 145 official finishers for a 54.92 finishing percentage, especially good considering the difficulty of the race course that was made more difficult with a 24-hour delay to the start because of more than four inches of rain that fell in the Ensenada area and around the course on Tuesday, Wednesday and Thursday of race week.

The results were made official following complete data tracking review of the devices on each vehicle in the event early Monday morning (Nov. 25).

Ensenada, “The Off-Road Capital of the World" is a coastal city on the Bahia de Todos Santos area of the Pacific Ocean, 80 miles south of the U.S. border at San Diego.

As it has for over four and one-half decades, SCORE has put together another memorable race course for the 52nd anniversary, this one a loop race, with all of the foreboding, unforgiving terrain and inspiring beauty that the northern state of the majestic Baja California peninsula has to offer.

SCORE President/Race Director Jose A. Grijalva designed and finalized this year’s race course of 800.5 miles. The course had three physical checkpoints and approximately 281 virtual checkpoints along the way to the finish line.

Starting and finishing in the heart of Ensenada adjacent to the historic Riviera del Pacifico Cultural Center, the course traveled East to Ojos Negros and then ran counter-clockwise in a weaving route around both the West and then the East side of the northern part of the peninsula.

The course ran in a counter-clockwise direction after the two-way section to the Ojos Negros area and down along the Pacific Ocean through Uruapan, Santo Tomas, Erendira, Santo Domingo Wash and San Quintin.

From there it traveled Northeast going by Rancho El Coyote, across and around Mike’s Sky Rancho, down by Simpson’s Ranch. The route then continued up to a speed zone on Highway 3 before going down over Laguna Del Diablo through Morelia Junction down and back up past San Felipe before heading back up through Laguna Salada, then South back through Santa Catarina to Ojos Negros and the finish on the two-way section back into Ensenada.

The course also went through two of Baja California’s infamous washes on the east side of the course—Matomi Wash and Amarillas Wash.

The three physical checkpoints were located starting with Checkpoint 1 which was near Vicente Guerrero (race mile 224.25), Checkpoint 2 was at the El Chinero Highway 3 Road Crossing (rm535.94) and Checkpoint 3 was near Santa Catarina (rm 708.47).

Ensenada’s hometown heroes and brothers Alan and Aaron Ampudia made some lasting history on Nov. 24 by winning the overall and SCORE Trophy Truck title in the iconic BFGoodrich Tires 52nd SCORE Baja 1000, presented by 4 Wheel Parts, the iconic Granddaddy of All Desert Races.

Second generation desert racers from Ensenada, brothers Alan, 28 and Aaron, 26 split the driving in their No. 10 Papas & Beer Ford Raptor built by ID Design to a winning time of 16 hours, 10 minutes and 36 seconds while averaging 49.48 miles per hour over the rugged, rain-soaked race course. Their older brother Rodrigo Ampudia, 34, was a navigator for both his brothers during parts of the race.

Both class winners in different classes, it was their first career SCORE Trophy Truck race win as the Ampudia brothers became just the third team of Mexican Nationals to win the legendary race.

First to accomplish it was the father/son team of Gustavo Vildosola Sr/Gustavo ‘Tavo’ Vildosola Jr in 2010 and the son/father team of Carlos ‘Apdaly’ Lopez/Juan C. Lopez at the 50th anniversary race in 2017. Both of those first two accomplishments were races that started in Ensenada and finished in La Paz.

Al-Attiyah, of Qatar and Australia’s Price, finished second with a penalty-free time of 16:21:06 (48.96mph) in Jesse Jones’ new Mason-Built No. 76 Ford F-250. Jones was scheduled to drive as well but a leg injury forced him to the sidelines.

Finishing third overall and in SCORE Trophy Truck after leading much of the race, San Diego’s third-generation desert racer McMillin and Hall of Fame racer Roeseler, Imperial, Calif. covered the unforgiving course in the No. 83 Racer-built Mark Racing Ford F-150 in a penalty-free 16:21:33 (48.93mph), just 27 seconds behind the Dakar Duo.

Riding the No. 1x Honda CRF450X, Justin Morgan, 29, El Cajon, Calif. and his four-rider team raced to the overall motorcycle victory for his eighth consecutive overall motorcycle win in the SCORE World Desert Championship. The trio crossed the finish line in 17:34:28 with an average speed of 45.55mph.

For Morgan it was his second overall win in the SCORE Baja 1000 while it was also the second for Esposito, third for Eddy Jr and fourth for Kamo.

The victory was also the 29th overall motorcycle win in this legendary race for American Honda.

Second generation SCORE desert racer and long-time NASCAR Cup racer Brendan Gaughan, Las Vegas, captured the unlimited Class 1 by over an hour while finishing 20th overall among four-wheel vehicles in the No. 162 Chevy-powered HMS open-wheel desert race car. His winning effort was completed in 20:57:38 (38.19mph). He defeated 12 starters in his class for his first class win in the SCORE Baja 1000.

Defeating 27 starters in his class and 48 total UTVs to win the overall UTV title in this year’s race was Justin Lambert, Bakersfield, Calif., with a winning time of 21:00:43 in his No. 2918 Polaris RZR XP4 Turbo. He also won his Pro UTV FI (Forced Induction) class.

All of the SCORE race coverage shows also continue to air internationally in nearly 25 countries in Europe, Asia, Latin America and South America via syndication and ESPN International.