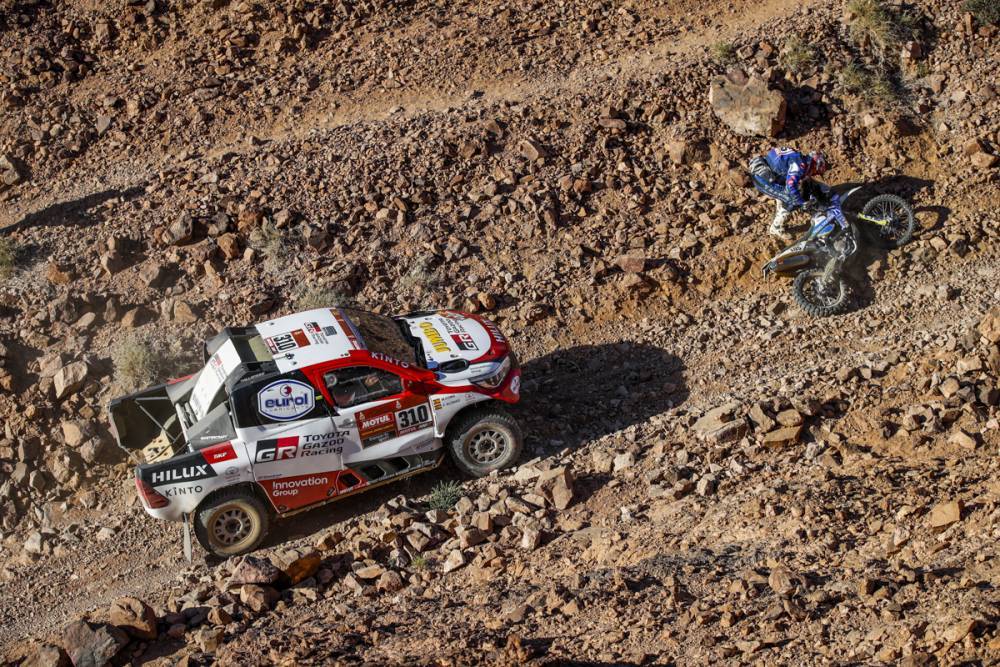 Fernando Alonso's hopes of contending for a spot among the Dakar's front-runners were dealt a major blow on Monday when the Spaniard was halted for over 2 hours after hitting a rock.

The rally-raid's second stage in Saudi Arabia saw competitors run from Al Wajh to Neom, a 367 km route which was won by Alonso's Toyota Gazoo Racing teammate Giniel de Villiers thanks to a faultless drive.

Participants were handed the day's roadbook just minutes before the start of the stage which complicated the field's navigation.

Onboard his Toyota Hilux with co-driver Marc Coma by his side, Alonso held his own among the fastest cars until the two-time F1 champion suddenly ground to a halt after 160 kilometers.

An impact with a rock had inflicted damage to the Toyota's wheel and suspension, which Coma attempted to repair. But ultimately the pair was forced to wait for their assistance truck.

After 2 hours and 30 minutes, Alonso was on the move again, but the mishap was a major setback for the 38-year-old Dakar rookie.

Tuesday's third stage will feature a 427km loop around the mega city of Neom that will take competitors through canyons and mountains, to the border with Jordan and back.

The second stage in Saudi Arabia smiled on the continent where the Dakar Rally came into being. Ross Branch won in the bike category to give Botswana its first victory on the rally, whilst Giniel de Villers gave South Africa reason to cheer with the 15th stage victory of his career.

Focus
The riders and drivers on the Dakar were never far from the beach… but today they did not encounter much sand between Al Wajh and Neom, as they constantly followed the Red Sea coastline. On their journey towards the north of the country, they especially traveled from valley to valley, with navigational decisions to be made at all times, which even left some of the most experienced crews dizzy, such as the Carlos Sainz / Lucas Cruz duo. As they reached a semi-mountainous section on the second part of the special, they hardly had the chance to appreciate the view of Jabal Dabbagh Mountain, because their full attention was required to negotiate the rocky terrain threatening their tires and, more worryingly, their machinery. In the Toyota team, Nasser Al-Attiyah bore the brunt of such mishaps but without serious consequences. Unfortunately, the same could not be said for Fernando Alonso…

The essentials
After several impressive showings on his first Dakar in 2019, Ross Branch picked up his first stage victory by catching his rivals one by one on the way to Neom. This win is surely the start of more to come and at the finishing line he beat the new leader of the general standings, Sam Sunderland. Yesterday’s winner Toby Price was obliged to open the way and lost 12 minutes as a result. This difficult day for the Australian was in stark contrast with Ignacio Casale’s stage in the quad race, as he obtained a second consecutive success with remarkable ease. The car race was much more eventful for the usual leading lights of the discipline due to navigation problems which cost Nasser Al-Attiyah, Carlos Sainz and Stéphane Peterhansel plenty of time, enabling the experienced South African Giniel de Villiers to become the first driver in the history of the Dakar to win specials on three different continents, in front of Orlando Terranova who took advantage of others’ mishaps to take the lead in the general standings. There was also a change of leader in the SSV race with title holder Chaleco LÃ³pez taking command, as well as in the truck category, thanks to a fine performance from Siarhei Viazovich, a driver who is on top form and intent on disputing the supremacy of the Kamaz armada in the Middle East.

Performance of the day
Relatively unknown to the general pubic, Sheikh Khalid Al Qassimi had nevertheless already made a name for himself with a solid 6th place on the Dakar 2018. The arrival of the prestigious rally in Saudi Arabia, neighbor to his native United Arab Emirates, has seemed to galvanise the former WRC driver who took perfect advantage of his Peugeot 3008 DKR’s qualities on the way to Neom. A skilful navigator, the representative of Abu Dhabi finished with a very fine third place on completion of the special, pushing him up to 7th place in the general standings.

A crushing blow
After an honorable debut and eleventh place on the first stage between Jeddah and Al Wajh, Fernando Alonso increased his pace on the first part of the stage leading to Neom. However, an impact with rock after 160 km ripped a wheel off his Toyota, which led to the former Formula 1 champion losing 2 hours and 30 minutes for repairs. The Spaniard is just at the start of his learning curve on the rally…

Stat of the day
6: with the best time on the stage finishing in Neom, Ross Branch became the first stage winner from Botswana but also the 6th representative of the African continent to taste stage triumph on the Dakar. In the history of the bike category, the most successful competitor has been South African Alfie Cox with a sequence of 8 specials between 1999 and 2003, whilst Franco-Malian Alain Duclos won in his hometown of Bamako in 2006, then again in 2014 in Argentina. The continent has enjoyed other victories more recently, in the quad race with Brian Baragwanath in 2016. It is especially represented at the highest level in the car race by Giniel de Villiers, who won the rally in 2009 and picked up his 15th special win today. However, the pioneer was Kenyan Shekhar Mehta, who won 6 specials and finished 5th in the general standings in 1987.

Quote of the day
Sam Sunderland: “It’s the Super Marathon stage, so we have to try and take care of the bike the best we can. I used the rear brake quite a lot today and I just wanted to change the pads just to be safe for tomorrow. It was a really difficult day, really long with big variations in terrain and navigation, from high speed to really slow and technical, in and out of the canyons with a lot of tracks that were less visible. All in all, it was a good day and I’m just trying to keep a steady rhythm, to keep building throughout the race. It’s not so easy when you’re in the dust because you have to pay so much attention to the tracks in front of you, to not lose the way and try to miss any rocks… It's really difficult, really difficult so far".