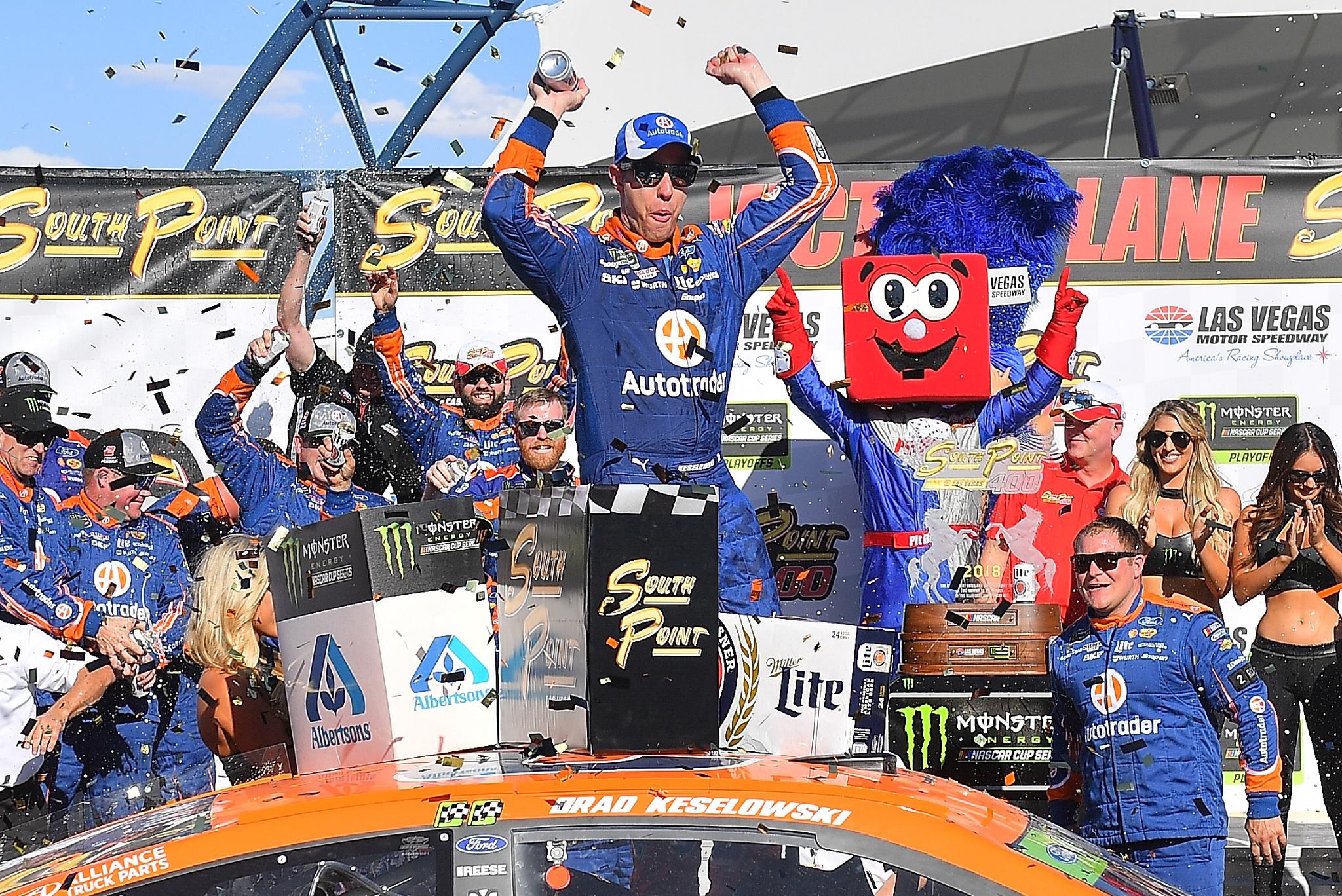 In a war of attrition that caused a multitude of problems for the majority of Monster Energy NASCAR Cup Series Playoff contenders, Brad Keselowski emerged unscathed with his third straight victory in the series and the 500th triumph for Team Penske in all forms of racing combined.

With his third victory of the season, his third at Las Vegas and the 27th of his career, Keselowski guaranteed himself a spot in the second round of the Playoffs.

"To start off the Playoffs with a win is really strong. I know it's three in a row and all that great stuff, but it's really a testament to this team… We weren't as fast as the 78 car (third-place finisher Martin Truex Jr.), but we nailed the pit stops and the restarts."

Most of the 16 Playoff contenders just got nailed—and decisively.

Kevin Harvick, the series leader in victories with seven this year, blew a tire on Lap 148 and rocketed into the Turn 1 wall. Pole winner Erik Jones, running behind Harvick, couldn't avoid the wreck and plowed into Harvick's Ford. Both cars were eliminated, with Harvick finishing 39th and Jones 40th.

[adinserter name="GOOGLE AD"] In a similar incident in Turn 4 on Lap 212, Chase Elliott was collected against the outside wall when Jamie McMurray's Chevrolet turned sideways in front of him. Elliott fell out of the race in 36th place.

Denny Hamlin's spin off Turn 4 on Lap 247 caused the ninth caution and subsequent restart that allowed Keselowski to take the lead from Larson, who had passed the No. 2 Team Penske Ford on Lap 245 and had the long-run speed to win the race, had the event stayed incident-free to the finish.

Jimmie Johnson showed some of his best speed of the season, but his No. 48 Chevrolet sustained heavy damage in a Lap 257 accident that also involved Playoff drivers Clint Bowyer, Alex Bowman and Kurt Busch. Johnson, a seven-time series champion, finished 22nd, two laps down, one position behind Busch and one ahead of Bowyer.

Bowman came home 19th and currently occupies the 12th position in the standings, with the Playoff field set to be cut from 16 drivers to 12 two races hence at Charlotte.

Kyle Busch survived contact with the outside wall, a spin through the infield grass and damage to the front of his No. 18 Toyota to finish seventh.

Truex, who won the first stage, took the series lead by two points over Kyle Busch. Keselowski is 18 points back in third place, with Harvick 27 points behind in fourth, thanks to the 50 Playoff points he accumulated during the regular season.

The four drivers currently on the outside when it comes to advancing to the next round are Johnson, Elliott, Jones and Hamlin.

Five of the race's 12 cautions came in the last 40 laps, as the accidents took their toll on one Playoff driver after another.

"I didn't think it was ever going to end," said Keselowski, the third driver to win three consecutive races this season, joining Harvick and Kyle Busch. "I was worried about running out of gas there at the end."

Team Penske drivers Joey Logano and Ryan Blaney ran fourth and fifth, respectively. Aric Almirola finished sixth and Playoff driver Austin Dillon came home 11th after starting from the rear of the field because of unapproved adjustments to the body of his car.

"Brad clearly found a horseshoe," said Truex, the defending series champion. "Three races in a row he's won, and he has not had the best car.

"Obviously, he hasn't led the most laps in any of those races, and he showed up at the end with good pit stops and good short run speed. I think, clearly, it's pretty obvious how it worked out. He's hot right now. He's on a streak. That's the way it goes."