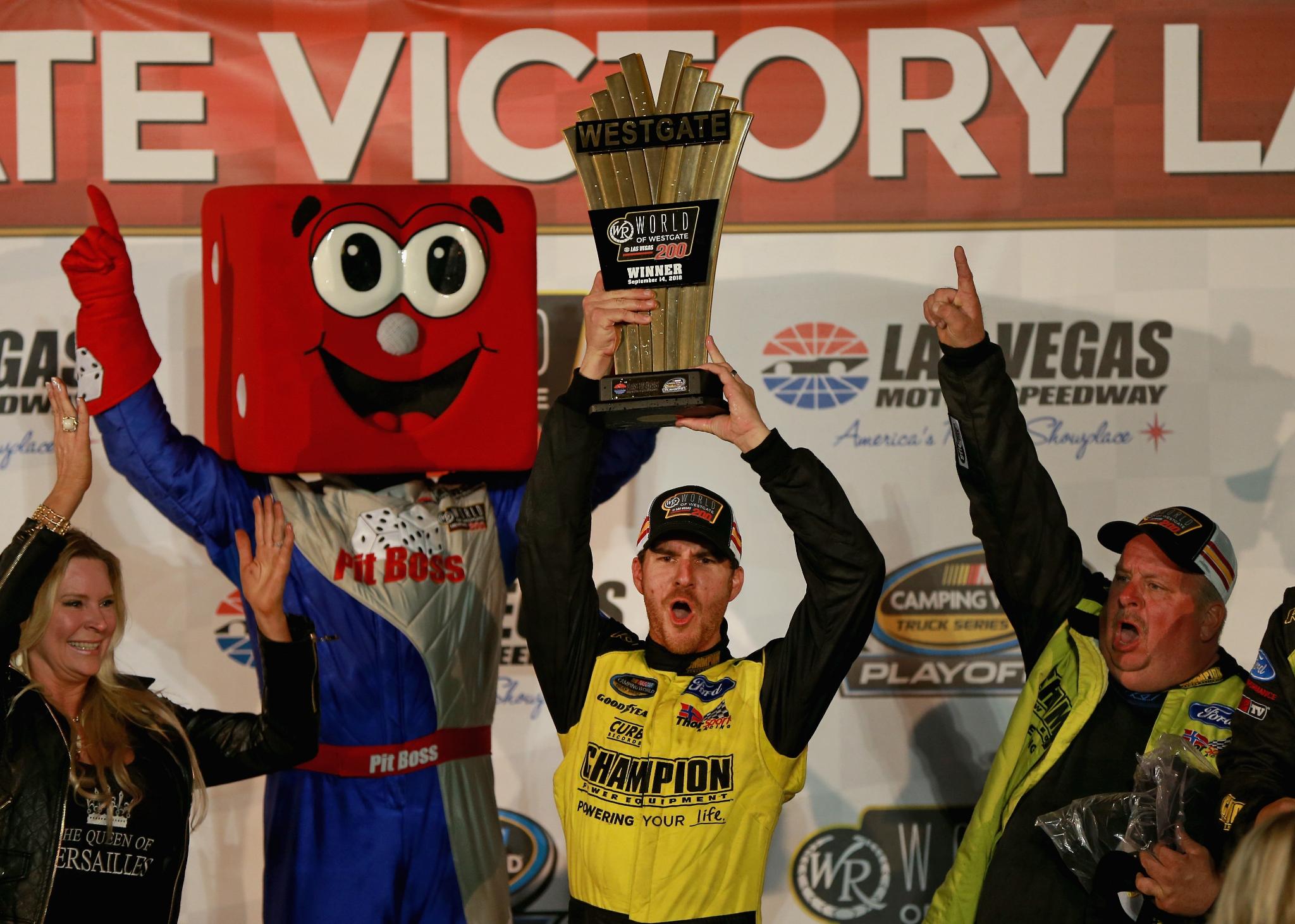 It took three overtimes for Grant Enfinger to get his first victory of the season, with a win that represented a giant leap in the NASCAR Camping World Truck Series Playoffs.

In the second race of the postseason, Enfinger went from eighth in the Playoff standings to a guaranteed berth in the second round when he held off charging Johnny Sauter in the third overtime to win the World of Westgate 200 at Las Vegas Motor Speedway by .142 seconds.

Brett Moffitt led the field to the green flag in all three overtimes, coming within 200 feet of winning in the second extra period before a multicar wreck caused the 11th caution and forced NASCAR to red-flag the race on Lap 138.

When Moffit came to the final restart, his No. 16 Toyota failed to pick up fuel, and Enfinger, who restarted second, surged into the lead. Having to work his way around Moffitt's sputtering truck, Sauter fell back and ran out of time in a race that went 10 laps beyond its scheduled distance of 134 laps.

The second straight Playoff race produced a first-time winner this season, with Justin Haley having triumphed Aug. 26 at Canadian Tire Motorsport Park. With berths in the second round secure, Enfinger and Haley can race stress-free in the Oct. 13 cutoff at Talladega Superspeedway, Enfinger's home track.

"There's only two of us comfortable going into Talladega, and I'm one of those two," said Enfinger, who knew he had a strong No. 98 ThorSport Racing Ford entering the race. "It's kind of the culmination of the whole year.

"We've put together the pieces needed to win a race individually but not as a whole as a group. The truck was great – we had the best truck out there."

Sauter might take issue with assertion. His No. 21 GMS Racing Chevrolet improved throughout the event, but Sauter's Achilles heel was the restarts.

"My restarts absolutely sucked tonight—just awful," Sauter said. From first to second gear, it was terrible. The 16 (Moffitt ran out of gas, and I had to snake around that, and we just lost a little bit of momentum.

"We've just got a little work to do. Obviously, we had the fastest truck the last half of the race."

Sauter, at least, goes into Talladega with the series lead, 17 points ahead of pole winner Noah Gragson, who overcame a cut tire and a commitment line violation to finish 18th. With the Playoff field set to be trimmed from eight drivers to six after Talladega, Ben Rhodes (fourth Friday) and Stewart Friesen (17th after three spins) are the two drivers on the outside, but both are within close range of fifth-place finisher Matt Crafton, who is fifth in the standings.

Haley took advantage of the late restarts to finish third ahead of Rhodes and Crafton. Moffitt came home 11th after his truck finally picked up fuel on the next-to-last lap.

Enfinger's win came after crew chief Jeff Hensley opted for a no-tire call following Enfinger's victory in the second stage. An opportune caution on Lap 100 gave Enfinger a chance to gain a tire advantage, and he used the fresh rubber to charge through the field.