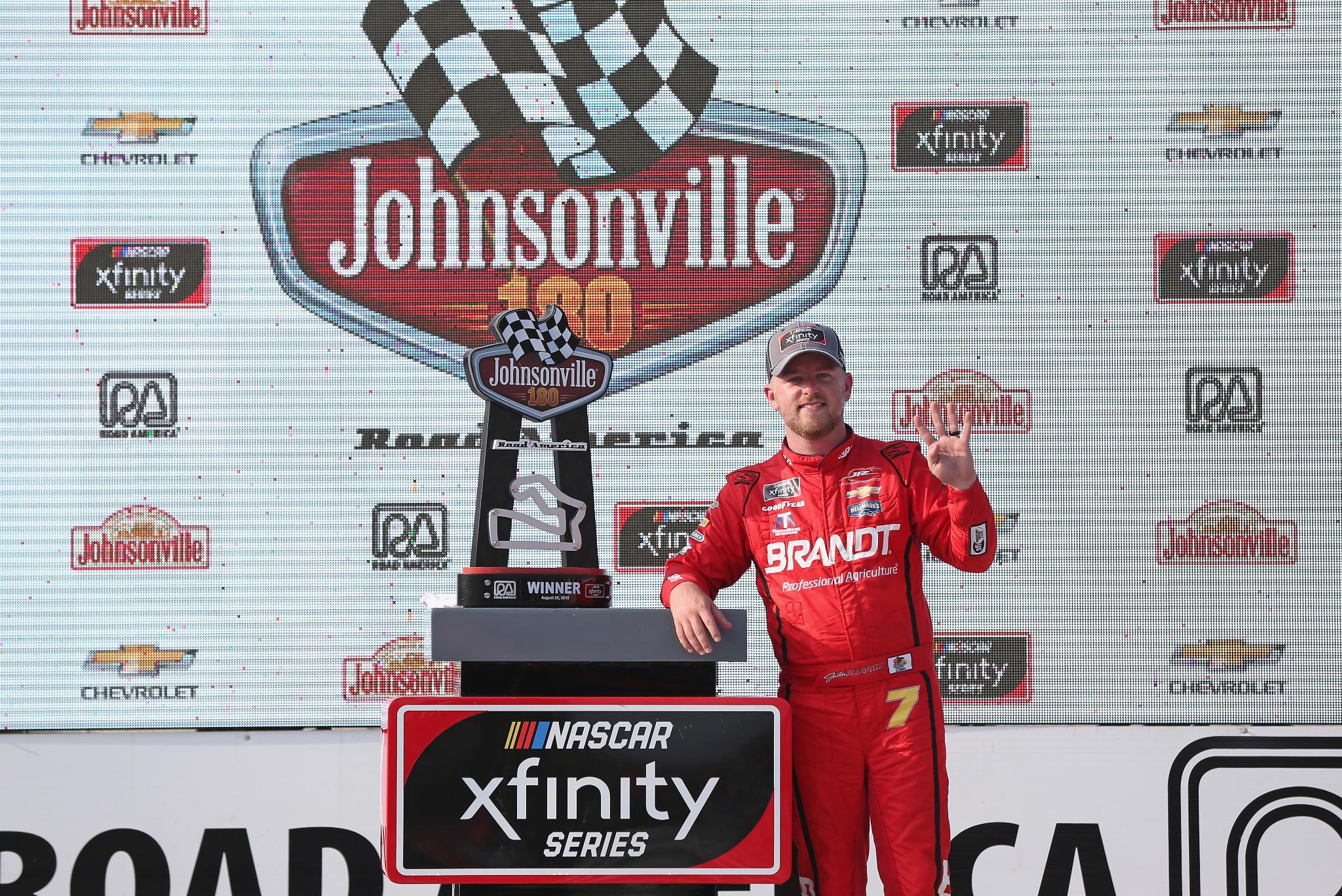 Continuing to make the most of his banner year in the NASCAR Xfinity Series, Justin Allgaier took advantage of a mistake by James Davison in the closing laps of the Johnsonville 180 to cruise to his fourth win of the season at the 4.048-mile road course of Road America.

Allgaier who used pit strategy throughout the 45-lap event to keep his No. 7 BRANDT Chevrolet Camaro up front elected to stay out when the final caution waved at Lap 38 when Josh Bilicki crashed in Turn 12.

But, a push from Joe Gibbs Racing teammate Christopher Bell on the Lap 39 restart, Davison grabbed the lead entering Turn 1 from Allgaier – but the Australian made a mistake and overshot the corner in Turn 8 – handing the lead back to Allgaier who then cruised to a 5.303 second victory over Matt Tifft.

"The last restart there, (James Davison) kind of left before I did and (Matt Tifft) gave me a shot based on he didn't think (Davison) was going. I spun the tires really bad after I got hit," Allgaier said in Victory Lane. "I thought I had gave it away.

"Then when he made the mistake down in (Turn) 8, I knew I just had to be smooth and fast. This team is awesome. I told them on the radio after the race that it was an honor to drive these race cars. I can thank everyone enough that's on this race team and back at JR Motorsports."

With his ninth career NASCAR Xfinity Series win and second straight win on a road course, Allgaier grabbed the points lead from Christopher Bell with three races remaining before the Playoffs.

"This team is incredible," added Allgaier. "They never give up. I never would have thought that we could have a dream season like this one. Wins on two road courses, would you believe that?"

Tifft who started on pole had his strongest run of the season after leading 12 laps and finishing runner-up.

Justin Marks had contended for the runner-up spot but made contact with Davison with three laps to go and recovered to finish sixth. Ross Chastain grabbed seventh ahead of Davison, Brandon Jones and IMSA standout Andy Lally to round out the top-10.

IMSA and open wheel veteran Katherine Legge finished 14th after running as high as third in her second Xfinity Series start, while Bill Elliott, the NASCAR Hall of Famer who briefly came out of retirement for a one-race deal with GMS Racing finished 20th after being involved in an early race entanglement.

"I feel like I hit everything but the lottery, I mean it was a great day," said Elliott. "I’d like to thank Xfinity, and all the guys and ISM Connect for everything they did for me here today. It was a heck of a lot of fun.

[adinserter name="GOOGLE AD"] Tifft led every lap in Stage 1 which ended in a one-lap shootout following the crash of Ryan Reed in Turn 3 on lap seven.

Staying out at the end of the stage, Brendan Gaughan inherited the race lead for the onset of Stage 2 but quickly lost the top spot to Austin Cindric who qualified eighth but started at the rear of the field.

Cindric’s time at the top was short lived, however, after the Team Penske driver experienced mechanical woes and dropped from the race at Lap 17.

"It just blew up," said Cindric. "At least we blew up in the lead. We had a real fast car. It’s unfortunate. We have to look back and see what happened. It wasn’t a missed shift in the race.

"There was a lot of debris on the track, maybe we got some debris caught up in the car. It just wasn’t meant to be today."

Hemric never relinquished the lead for the Lap 18 restart holding off Tifft for his third stage win of 2018.

With Hemric and Tifft taking their opportunity to pit during the stage break, Justin Allgaier stayed from third and led the 40-car field back to the green for the start of Stage 3.