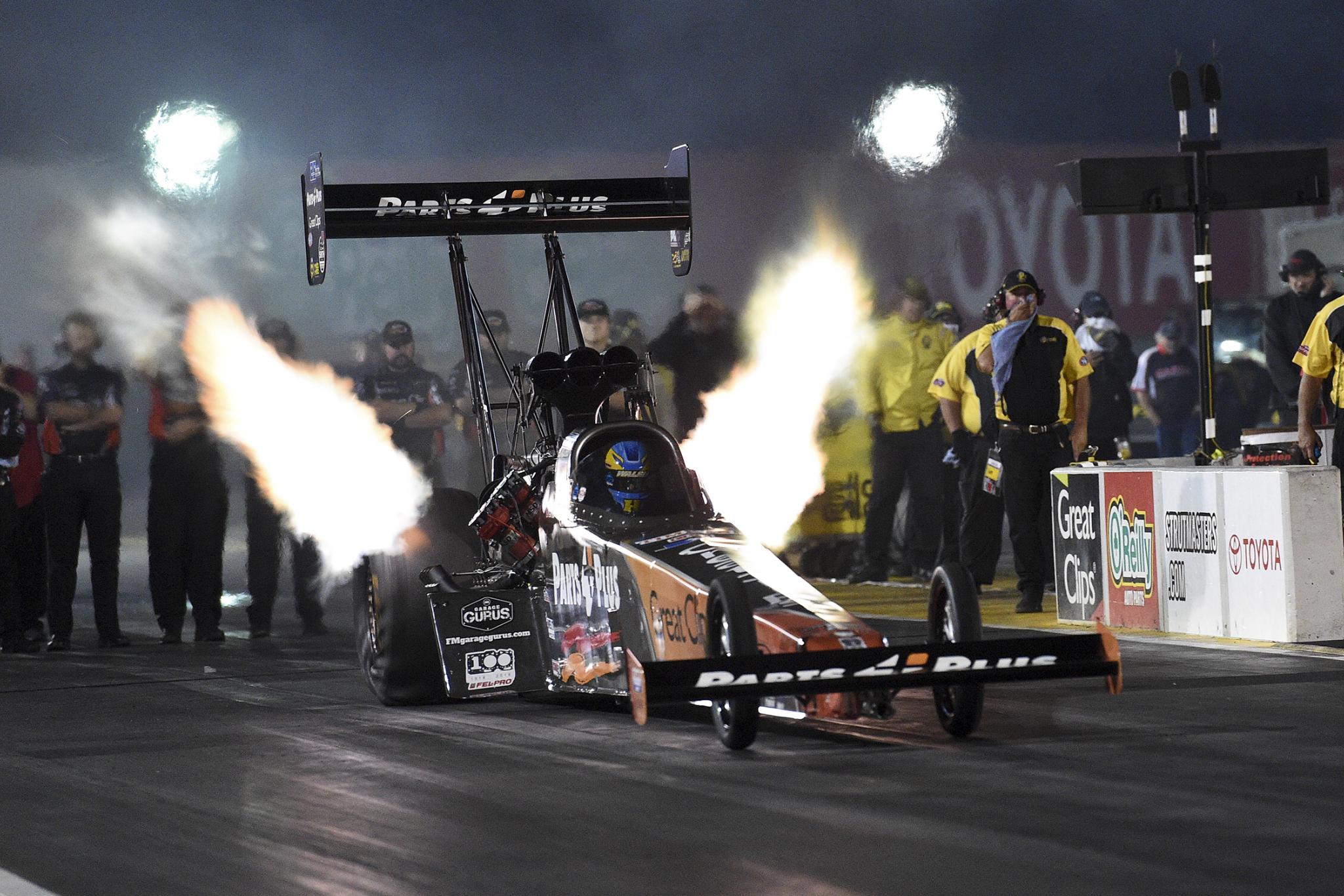 Top Fuel's Millican scored his seventh No. 1 qualifier of 2018 and first at Sonoma, as his pass of 3.700 at 327.98 in his Great Clips/Parts Plus dragster from Friday held up. It is also the 17th career No. 1 qualifier for Millican, who clinched his spot in the Mello Yello Countdown to the Championship on Saturday and is also seeking his first career win at Sonoma Raceway.

"I am not ever going to complain about being the No. 1 qualifier and it certainly shows that the team is capable of being the quickest car here," Millican said. "It's stacked on our side (of the ladder), but you have to beat them all to get a yellow hat (for a win) and that's our gameplan. Our goal is to be No. 1 and we achieved that."
Leah Pritchett, who won last weekend to kick off the Western Swing, will start from second in her Palomar Builders dragster after her 3.727 at 328.38 on Friday. She will meet Bill Litton in the first round. Pritchett and Tony Schumacher both clinched spots in the Countdown to the Championship.

In Funny Car, points leader Courtney Force secured her 10th No. 1 qualifier of the season thanks to her run of 3.910 at 326.16 mph on Friday in her Advance Auto Parts Chevrolet Camaro. It is the 26th career No. 1 qualifier for Force, who claimed the top spot at Sonoma for a second time and will face Del Worsham in the opening round on raceday.

"It's been a lot of fun for me to drive," Force said. "They've got that thing dialed in. We had a great number in Q2 yesterday that took us to that top spot. We were looking to improve today or at least have a little bit more consistency, but we struggled a little bit. But we were still able to take that top spot, which feels pretty good, especially to hear it's our 10th this season. That's pretty incredible and this is exactly how we would like to go into the second race of the (Western) Swing."
Jack Beckman's 3.929 at 324.51 from Friday in his Infinite Hero Foundation Dodge Charger R/T kept him second, setting up a first-round matchup with defending event winner J.R. Todd.

Pro Stock's Anderson grabbed his ninth top qualifier in 2018, as the points leader's 6.515 at 211.16 from Friday in his Summit Racing Equipment Chevrolet Camaro remained the category leader. It is the 102nd career No. 1 qualifier for the four-time world champion, tying Anderson, who is seeking a second straight win on the Western Swing, with Bob Glidden for the third-most all-time. Anderson also clinched his spot in the Countdown to the Championship.

"It's just a heck of an honor to tie that record," Anderson said. "We try every day to set records and break records, and win races. It feels great to be tied with (Glidden), and I'm pretty happy with that. The depth in this class is deeper than it has ever been and there's just zero room for error anymore, but that's what is great about it. I feel it's the ultimate challenge in racing."
Anderson will race Joey Grose in the first round of eliminations, while his longtime teammate, Jason Line, starts second after his run of 6.517 at 211.03 on Friday in his Summit Racing Equipment Chevrolet Camaro. He will meet Steve Graham in round one on Sunday.

Defending Pro Stock Motorcycle world champion Krawiec raced to the No. 1 position for the second straight race with a run of 6.757 at 199.94 on his Screamin' Eagle Vance & Hines Harley-Davidson. Krawiec, who has five No. 1 qualifiers at the track, will meet Karen Stoffer to kick off eliminations. He also clinched his spot in the Countdown to the Championship, as did teammate and points leader Andrew Hines.

"We've been chasing that 200 mph run and it was right there," Krawiec said. "The weekend is still not over and (Sunday) it could definitely happen. I'm excited about it. I'm happy to have a green hat (as No. 1 qualifier), but I really wanted to hold that Mickey Thompson Pro Bike Battle check at the end of the day here. I had a great motorcycle all day and I'm excited going into raceday."
Hector Arana Jr. stayed in second on his Lucas Oil Racing TV EBR, improving to a 6.775 at 199.88, setting up a first-round matchup with Angelle Sampey.
Eliminations at the Toyota NHRA Sonoma Nationals begin at 11 a.m. on Sunday.
[adinserter name="GOOGLE AD"]