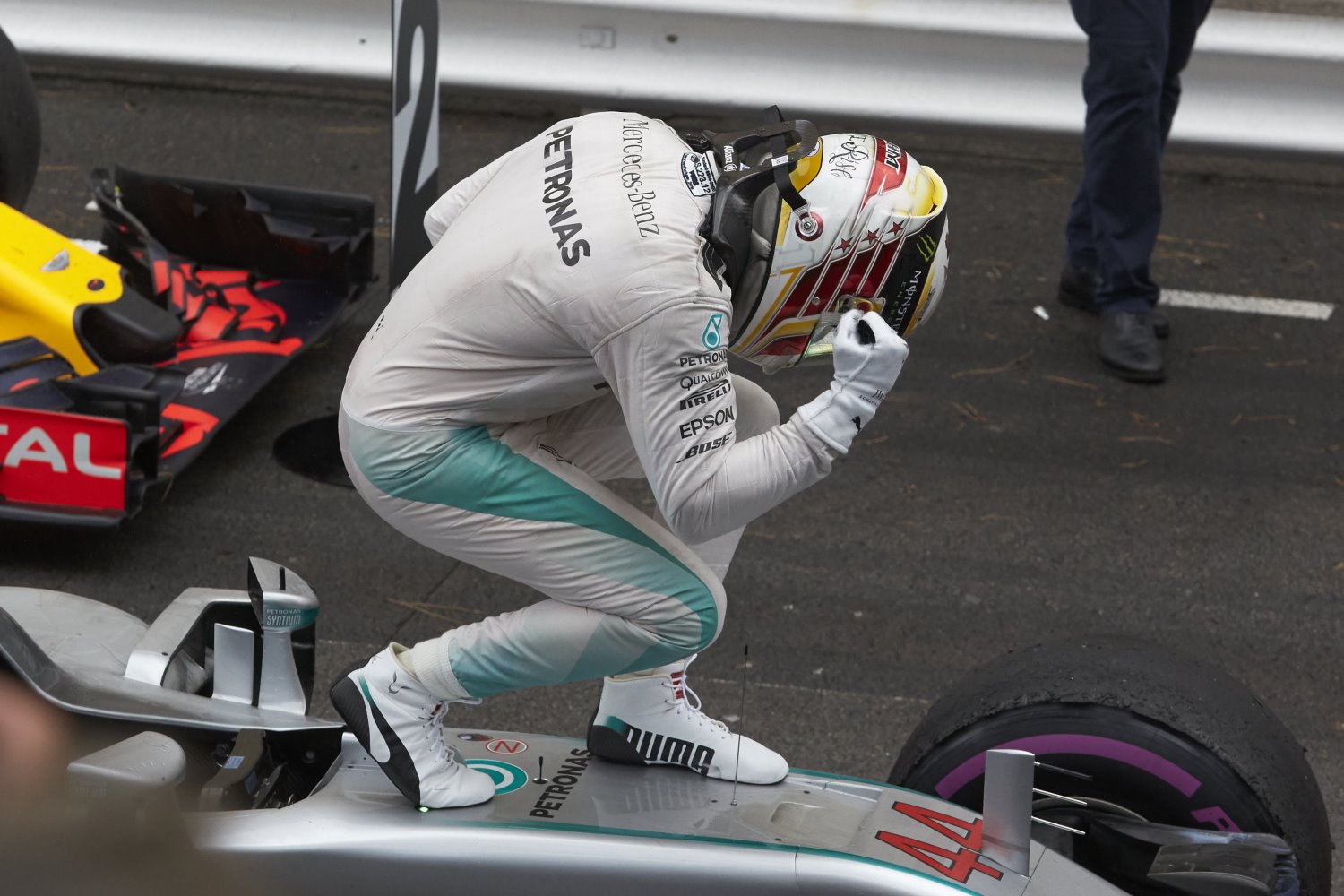 Monaco is a race like no other. You don't need to be an F1 aficionado to know that much. The tight, twisting circuit that threads its way through the famous streets of Monte Carlo is a one-of-a-kind throwback to the eras of Fangio or Caracciola. And even now, decades later, this remains the crown jewel of the Formula One calendar.

It's the race every single driver on the grid wants to win – or win again, in Lewis Hamilton's case. But victory in the Principality isn't quite like winning anywhere else. The greatest Grand Prix of them all offers a unique challenge not only to the drivers but the teams as well.

Monaco is the ultimate drivers' circuit – a track all about precision. Drivers spend hours at the factory ahead of the race studying and preparing for this one race. Some go even further…

"I've been doing this for a long time now," says Lewis. "I spend a lot of time at the factory with the engineers to understand past races. Just the other night, I was driving around the track in my Smart car, visualizing the circuit. It's not so easy, though, when there are lots of cars around!"

As Lewis explains, racing at Monaco is all about peaking at exactly the right moment. A driver must feel his way into the weekend, building up confidence and momentum as the track develops. From the moment they turn left out of the garage on Thursday morning in FP1, this process begins. They'll push that bit harder, flirt that fraction closer with the barriers and brake a touch later, as they find more time from within themselves.

[adinserter name="GOOGLE AD"]"The most important thing is that you have to learn to walk before you run," says Lewis. "You have to build up to the pace so that, by the time you work up to that second run in Q3, you're at 100%."

You'll often see drivers who are quick in the earlier sessions crash out on Saturday morning in FP3 where they've pushed just that bit too much, too early. Monaco is not a circuit that forgives. If you misjudge your braking or your turn-in point even by a matter of millimeters, you'll end up in the barriers. And if you lose a session in Monaco, you'll struggle to recover from it.

Then there's the added challenge of 2017's wider, heavier, faster cars. "We have new cars this weekend which are wider and faster, so that's going to be a massive challenge," says Lewis. "In trying to push the car as close as you can to the limit, it'll be a real test of your awareness of where the car is. I'm sure there will be some brushing of the barriers…"

Monaco is the one race of the year when the Grand Prix can almost feel like a side show to the main event. Amongst the boat parties and the superstar celebs, having a distraction-free weekend is a huge part of the challenge for the drivers.

To combat this fatigue, the engineers spend a lot of time ensuring that their drivers are able to break up their time and switch off. It's tough, with Monaco a busy weekend from a media and marketing perspective. But this is crucial in allowing the drivers to relax and get away from what is a very intense weekend, with immense pressure.

"It's a circuit which is all about mental strength," says Lewis. "You need to be sharp and clear. Experience counts here too – that helps massively in setting the car up."

Ultimately, Monaco is a weekend all about compromise, from the engineering setup to the cars themselves. The pit wall, for example, sits one story above the compact garages rather than overlooking the start finish-line as it does at every other circuit.

While engineers don't necessarily need to see the cars to engineer them these days, instead relying on bespoke software for strategy and live feeds for visual aids, they do like to be able to see the garage. In Monaco, the occupants of the pit wall have to rely on cameras to show them what is going on. It may seem simple – but good communication becomes even more important in that environment.

Logistically, too, Monaco is tricky to say the least. A distinct lack of garage space means the engineers share their office with front wings, floors and hydraulic systems. The frequent support races during the weekend mean they also have to deal with a near constant level of noise, as cars fly past while important debriefs are underway.

There's not much space downstairs either. The tire technicians, for example, have to work down in the harbor – carrying all of the tire sets up to the pit lane as and when they're needed because there is simply not enough space in the garage. These factors heap extra pressure on what is already a tough weekend for the team.

Track position takes on an even greater level of importance and must be considered in any strategy move here. When you're in the lead of the Monaco Grand Prix, it's all about protecting that position and managing the advantage. The last thing you want to do is offer the trailing car clean air and an opportunity to pass through strategy. .

In fact, you'll often see the leader driving within their means through fear of storming into a lead, only to see their advantage wiped out when they're left on worn tires later in the stint. This year's tires offer a new challenge, as teams expect to be able to complete the entire race distance on either the UltraSoft or SuperSoft. That low degradation rate means a smaller delta between the tires, which will only make it trickier to pass.

All these factors converge to make Monaco the stiffest test a driver can face in F1. Amid the yachts, glamorous guests and VIP events, it all comes down to mastering those 3.337 km of undulating tarmac. "Monaco is always a great challenge," smiles Valtteri. "We live for these kinds of challenges."

"It's always good to come away from a race weekend with a points advantage, no matter how small. But the gap is just that: very small. We are in a massive fight with Ferrari. On one side, this is very exciting and challenging. But on the other side, it is going to stretch us to our limits. You cannot base your current assessment on the balance of power on just Barcelona.

"It was painful to lose 15 valuable points with Valtteri retiring from P3. We've identified the root cause of the problem, which was the turbo. We haven't seen that defect before, which shows you that you need to be double diligent. This is a technical sport and if you stretch your limits, you'll encounter technical problems.

"If you look at the results, both Pascal and Esteban had a really good weekend. Pascal made the one-stop strategy work and could have been P7 – but P8 is still very good for him and very valuable points for Sauber. I'm happy to see how Pascal has fitted into the team. He speaks highly about the team and is on a great learning curve.

"As for Esteban, Force India have been very successful in scoring regular points. Esteban is making a good contribution to that. He will really need to stretch himself to beat Checo (Pérez), who is the benchmark for him, but I'm interested to see how that battle develops. They're pushing each other to new levels and Force India will be the beneficiary.

"We expect Monaco to be a completely different ball game to Barcelona. The circumstances, working environment and driving challenges are completely different to anywhere else – and you need to get everything exactly right if you want to perform to your maximum around those streets. Not every factor is under your control, either, so you need to turn fortune in your favor at the right time if you want everything to come together.

"Monaco is also one of our busiest races. We welcome many guests, executives and partners, who all contribute to our success in different ways. It's extra special to have this group cheering for us, so we look forward to their support at the track.

"Every weekend will push us to the limit; this is the new reality of Formula One in 2017. The last three years were extraordinary. But this season I have re-discovered why I love the sport. I love the intense competition. This competition means that you won't be winning easily – but that you'll have a fierce fight on your hands. Because of that, the feeling is even greater when you manage to come out on top, as we did in Spain.

"If we get the job done in Monaco, I'm pretty sure we'll bring down the garage roof. We're all properly fired up for this fight, so let's see what we can do…"