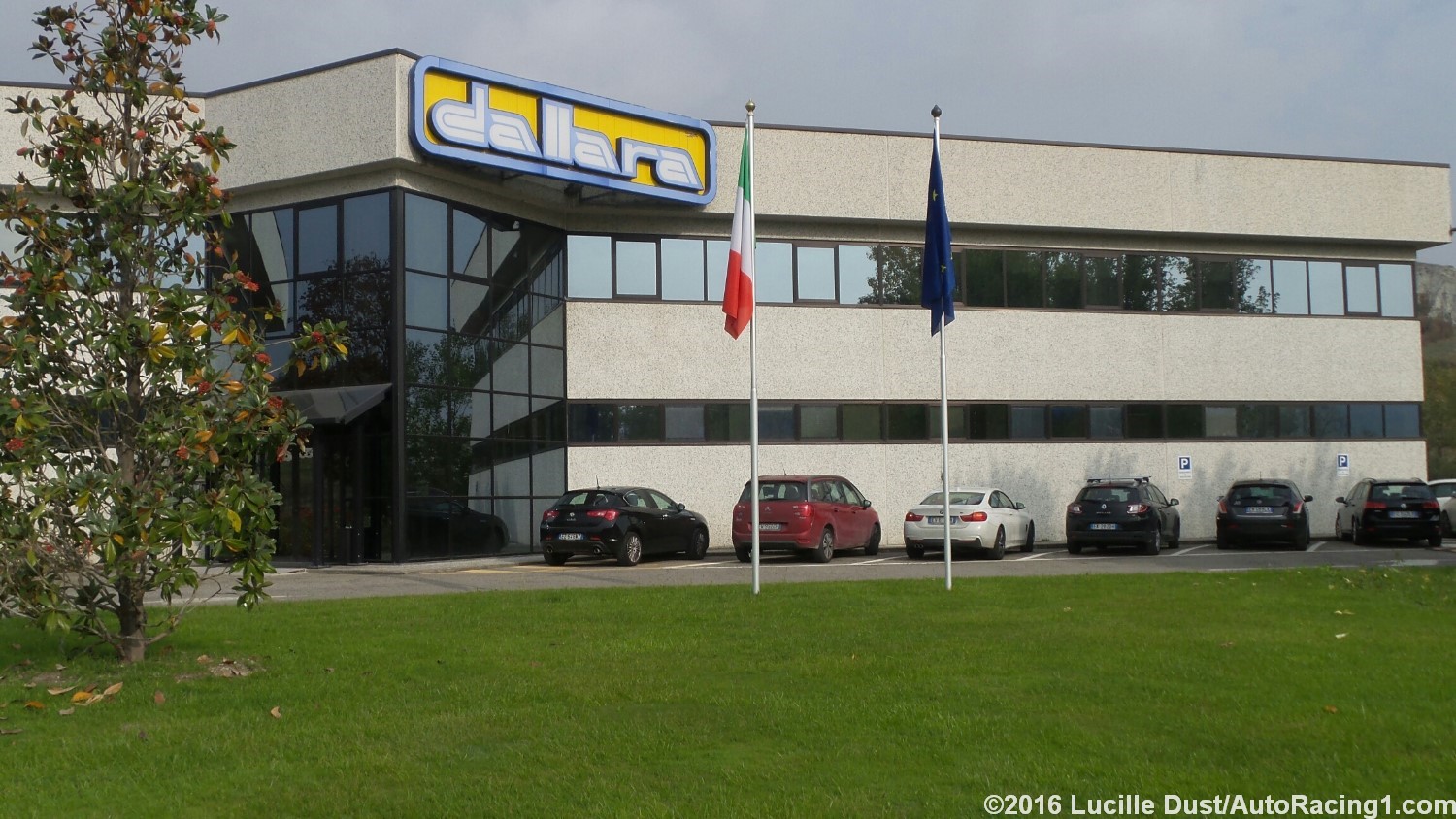 Hello from Italy! It is not unusual for me to report from a race track or a race event. But this time it was off to Italy and a tour of the Dallara factory in Varano de Melegari near Parma, Italy where IndyCars are designed and manufactured. My goal is to give you an inside look about what is happening at Dallara and how things works within their company.

We arrived early for our appointment. As we were sitting in the reception area, a familiar gentleman walked by us and stopped as he recognized us from the IndyCar series.

The gentlemen was Andrei Toso, the head of R & D and US Racing Business Director at Dallara.

Toso inquired as to what we were doing at Dallara. He continued by saying that next week, some of the IndyCar people will be in Italy.

Jay Frye, President of Competition and Operations, Bill Pappas, Vice President of Competition, Race Engineering, and Tino Belli, Director of Aerodynamic Development will be working on the specs for the aero kit for 2018, to be used for three consecutive seasons. IndyCar has frozen the development of the Chevrolet and Honda aero kits to entice a new engine manufacturer to hopefully enter the series in 2018.

We asked Toso would the new design be similar to what it was back in 2015, before the series had Chevrolet and Honda develop their own aero kits.

Toso remarked, "IndyCar wants a new kit developed to please the fans because the fans want to see a more exciting look on the DW12." The new look will be similar to a Champ Car 10 years ago, far more appealing than today's IndyCar

Dallara was started in 1972 in Giampaolo Dallara's garage in his hometown of Varano de Melegari, Parma.

The current president, Mr. Dallara, had worked for Ferrari, Maserati, Lamborghini, and De Tomaso. While working as an aerodynamic engineer for Enzo Ferrari, Dallara was always working in the wind tunnel at the shop and not getting to the race track. Dallara decided to continue pursuing his dream of working in the world of racecars and so he left Ferrari and he established "Dallara Automobili da Competizione" in 1972. In the beginning he built his own wind tunnel in his garage until he could afford a proper facility.

Since its establishment, Dallara has become world renowned for its specialty in designing, manufacturing, and developing race cars. The company's success can be credited to its achievements in Formula 3, first in Italy then around the world, its acclaim with American IndyCars, its consultancy for major manufacturers, and its continued focus on technology and innovation.

Dallara prides itself in searching for the highest standards of quality, performance, safety, and customer support.

Every weekend, approximately 350 Dallara cars run on tracks around the world in various formulas. The company is present in all Formula 3 championships, and is the sole supplier of cars for IndyCar, Indy Lights, GP2, GP3, Formula 3.5 V8, Super Formula, and Renault Sport Trophy.

Dallara also makes cars for instructional leagues such as the Formulino, for the Formula E championship, and participates in the USCC.

In 1988 the company became a Formula One constructor, after being hired by BMS Scuderia Italia to build their chassis. The relationship between the Italian constructor and Beppe Lucchini's racing outfit endured until 1992, with their best result being two third places: one at the 1989 Canadian Grand Prix with Andrea de Cesaris; the other at the 1991 San Marino Grand Prix, thanks to JJ Lehto.

Dallara returned briefly to F1 in 1999, building the test-chassis for Honda's planned and aborted return to the series.

During 2004, Dallara recruited ex-Jordan, Stewart and Jaguar F1 designer Gary Anderson, leading to speculation that the Italian company was working on another F1 project. Late in 2004 the nascent Midland team announced that Dallara would be designing and building their Formula One chassis which was due to be entered for the 2006 season.

Following Midland's purchase of the Jordan team for early entry to F1 in 2005, Dallara continued co-operating with the team technically. However, the relationship fizzled out as Midland focused its resources on developing the existing Jordan infrastructure, and a new Dallara F1 chassis never appeared.

Dallara built the cars for the Hispania Racing F1 Team's entry in the 2010 Formula One season.

In April 2014 Gene Haas confirmed his new American Formula One team wasn't talented enough to design and build their own car so the Haas F1 Team, entered talks to form a partnership with Dallara in 2015 for the build of their first F1 car. On February 21, 2016, the Haas VF-16 was officially unveiled.

The strength of Dallara is the people that work there. Under the guidance of Giampaolo Dallara and now with the support of Andrea Pontremoli, partner and CEO, continuous investment in young people has made Dallara one of the best developers of talent in the world of Motorsports. Today it's employees have an average age of only 30.