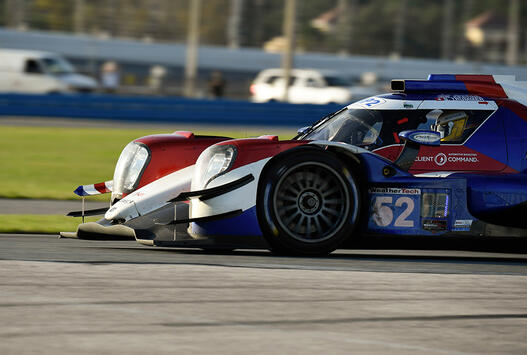 Keating ran a best lap of one minute, 38.056 seconds (130.694 mph) in the No. 52 PR1 Mathiasen Motorsports ORECA 07 LMP2 machine he is co-driving with Nick Boulle, Simon Trummer and Gabriel Aubry. The Texan is pulling double duty at the Roar and will be again in three weeks at the 58th Rolex 24 At Dayton. He also is competing in the GTD class alongside co-drivers Gar Robinson, Lawson Aschenbach and Felipe Fraga in the No. 74 Riley Motorsports Mercedes-AMG GT3.

“It’s pretty exciting," Keating said. “The car’s been great. Everybody at the PR1 team, they’ve got the car extremely well sorted. The last time I raced an LMP2 car was at Le Mans and I’ll just say the car wasn’t as well sorted. It’s nice to get in a car that has had a season or two under its belt to get everything sorted out and all I have to do is hop in and drive. It’s been really good."

Meanwhile, in the 15-minute GTD session that immediately preceded LMP2, Montecalvo drove the No. 12 AIM Vasser Sullivan Lexus RC F GT3 to a best lap of 1:46.754 (120.046 mph). He is returning for the full 2020 WeatherTech Championship with co-driver Townsend Bell and will share the car with Shane van Gisbergen and Aaron Telitz for the Rolex 24.

“With the changing conditions, I think our car from AIM Vasser Sullivan suits this well," Montecalvo said. “The team did a phenomenal car getting the RC F right on track from where we left off last year and that year of experience really shows for us. The guys did a great job."

The fastest speeds of the Roar Before the Rolex 24 At Daytona weekend in all four WeatherTech Championship classes were posted during night practice on Saturday. Oliver Jarvis put up a time of one minute, 34.753 in the No. 77 Mazda Team Joest RT-24P DPi car to lead the way at the end of two days of on-track activity at the Roar.

In addition to garage and pit stall qualifying for DPi and GTLM, Sunday’s on-track schedule for the WeatherTech Championship includes two more practice sessions. There also will be a pair of IMSA Michelin Pilot Challenge sessions on Sunday.

Longtime IMSA team and Daytona Beach, Florida-based BGB Motorsports has confirmed its participation for the full IMSA Michelin Pilot Challenge season after several years of running only individual races. This weekend at the Roar Before the Rolex 24, team owner John Tecce and his protégé since the team’s inception, Tom Collingwood, are joined by Jan Heylen behind the wheel of the No. 38 Porsche 718 Cayman Clubsport GT4.

“We raced in GRAND-AM for pretty much as long as I’ve been doing this from ’02 and then we stopped in ’13," Tecce explained. “I wanted to take a step back and start developing relationships with customers that wanted to grow from the club level up to the pro level.

“It just makes sense because we were an IMSA team forever and I feel like part of the IMSA family. The allure of the IMSA events – Sebring, Daytona – it’s just impossible for the guys to stay away from. They love the big show, the crowds, the hospitality, so it’s just a logical decision for us to come back and run a full season."

The 10-race season starts with a four-hour enduro at the team’s home track, Daytona International Speedway, on Friday, January 24 at 1 p.m. ET. The race can be streamed live via TrackPass on NBC Sports Gold for viewers in the United States, and on IMSA.tv with IMSA Radio commentary for international viewers.