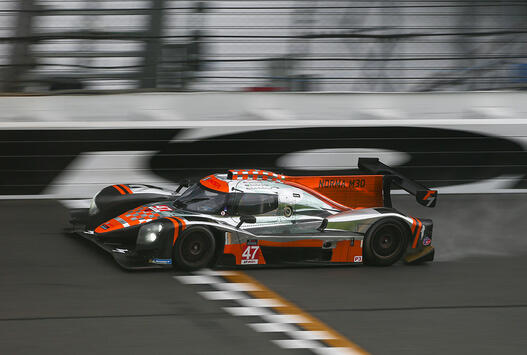 The team fell off the lead lap early after an incident under rainy conditions in the Bus Stop with their team car, the No. 40, but battled back in the final hour to get into contention for the victory. On a restart with 28 minutes remaining, Kirkwood lined up fourth behind the No. 75 of Max Hanratty, the No. 17 of Garett Grist and race leader Dakota Dickerson in the No. 54 entry.

Kirkwood and the No. 47 Norma M30 quickly made their way forward, and 10 minutes later he took the lead from Dickerson at the start-finish line. He cruised the rest of the way to win by 8.846 seconds.

It was Kirkwood’s first IMSA Prototype Challenge victory, coming in his first series start. However, he does have one previous win aboard an LMP3 car in an IMSA-sanctioned race, the 2018 Michelin IMSA SportsCar Encore at Sebring International Raceway co-driving with Canadian Roman De Angelis.

“This is my third time in an LMP3 car, the first time with the Norma last month we did a couple of amateur test days earlier in December," said Kirkwood. “This is really my first time at speed in this car. I adjusted to it really quick. It kind of suits my driving style. For me, I like more of an understeering car and I think that suits more for myself than the Ligier does."

Janco and Jorge co-drove to the IMSA Prototype Challenge Bronze Cup championship in 2019, but this was their first overall race victory in the series. They won the non-points Michelin IMSA SportsCar Encore in November 2019 with IMSA WeatherTech SportsCar Championship regular and past IMSA Prototype Challenge champion Tristan Nunez as their co-driver.

“It’s unexpected," Janco said. “We’re honored to have won the race. Clearly, I have a very good choice in co-drivers here and the team. Forty7 was awesome, they made no mistakes and they had a fast car. it’s just beyond any of my fondest dreams. “

“The team does a really great job," Jorge added. “They’re fairly new to this type of racing, they’ve been doing P3 for three years now. It’s a family-type of orientation so when we come into the track, you really feel welcome. That alone sets the precedent for the entire weekend."

Matt Bell and Naveen Rao finished second in the No. 64 K2R Motorsports Norma following a late-race rally from Bell, who restarted fifth with 28 minutes to go. Rao started the race from the pole position.

Third place went to the No. 54 MLT Motorsports Ligier JS P3 squad of Dickerson and Dean Baker. Cameron Cassels and Hanratty came home fourth in the No. 75 Performance Tech Motorsports Ligier, with Grist and Rob Hodes completing the top five in the No. 17 Nielsen Racing Norma.

In the Bronze Cup class for driver lineups that are exclusively Bronze-rated, Steven Thomas and Thomas Merrill took the victory in the No. 11 K2R Motorsports Ligier.

“The big piece of the credit goes to the K2R team for giving us a great strategy, Merrill said. “We were managing the conditions to our benefit and trying to stay out of pit lane as best we could. The conditions were tricky and so our job was to keep it on the island, keep the car in one piece and my job was to give Steven the car back in a good position that we could win our class and I’m happy to say we did that."

“I started racing one year ago almost today was my first in a race car," Thomas added. “Going from here to there, awesome. I want to thank Ross Bentley for helping me get there and for Thomas who has also been coaching me and has done awesome."

Television coverage of the 2020 IMSA Prototype Challenge season opener from Daytona will air on NBCSN at 4:30 p.m. ET on Tuesday, Jan. 14. Next up for the series is a one-hour, 45-minute battle on the 3.74-mile Sebring International Raceway circuit as part of the “Super Sebring" event week on Thursday, March 19. Live coverage of that race will be on TrackPass on NBC Sports Gold in the United States and internationally available on IMSA.tv and the IMSA App.