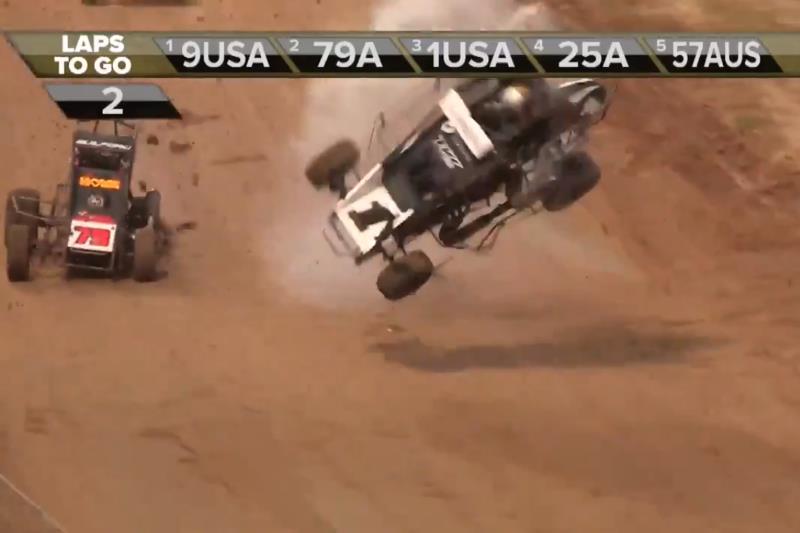 NASCAR drivers Kyle Larson and Christopher Bell have each had spectacular incidents on the opening night of their New Zealand speedway sojourns.

Both were competing in the opening round of the United Truck Parts International Midget Car Series at Auckland’s Western Springs Speedway but neither made the feature race.

The Chip Ganassi Racing driver, as well as Christopher Bell, began a series of midget and sprint car races with Day 1 of the United Truck Parts International Midget Series at Western Springs Speedway.

Larson finished second in the third heat race and won the fifth heat race and the first United States vs New Zealand vs Australia Test Race.

But both Larson and Bell’s night ended before they got a chance to compete in the midget feature race. Larson lost control and flipped multiple times with two laps left in another of the Test Races.

Larson had to lay on the ground after the incident, but his team announced on Twitter that he was OK.

After a hard wreck in the International Teams races, @KyleLarsonRacin is okay but done racing for the night at @SpringsSpeedway.

Had a bit of a tumble last night. Feeling surprisingly not too bad. That’s a huge thanks to @AraiAmericas, @SimpsonRacing Hybrid Pro and seat belts, @BUTLERBuilt, @Justin_insley King Chassis. Oh and my parents for making me drink lots of milk growing up. ðŸ'�ðŸ�¼

Bell, who won the NASCAR Truck Series in 2017 and will move into the Cup Series next year, had a similar incident later in the evening in the semi-main, also on the back straight.

Now @CBellRacing with a huge crash of his own @SpringsSpeedway pic.twitter.com/z3NX8IAZ68

Round 2 of the United Truck Parts International Midget Series is Dec. 28 at Baypark Speedway with the 40 lap Gold Cup.