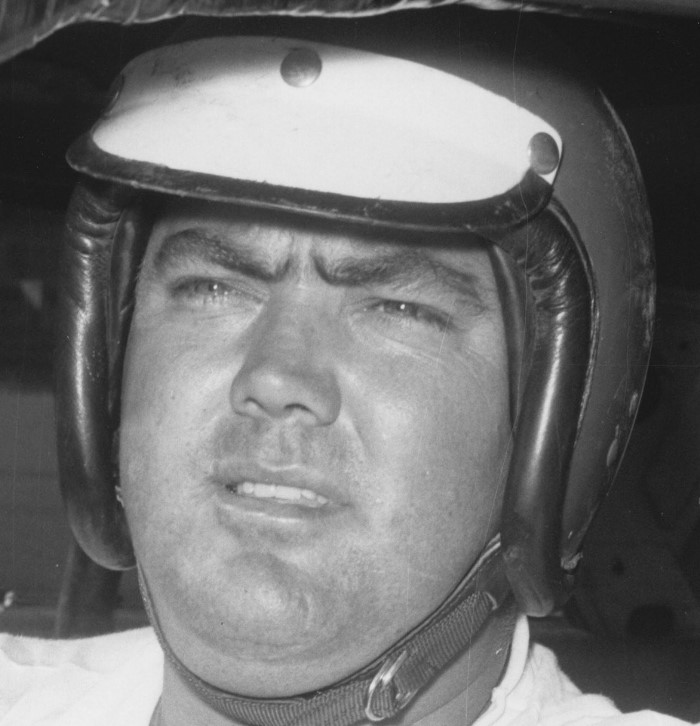 UPDATE Added video to story below from when Johnson was inducted into the NASCAR Hall of Fame.

12/20/19 ï»¿Junior Johnson, a stock-car racing giant whose career spanned the sport's history from its moonshining roots to its modern era as a fierce, hard-nosed driver and an innovative mechanic and team owner, has died. He was 88.

Johnson's passing was confirmed by the NASCAR Hall of Fame. He had been in declining health and entered hospice care earlier this week.

Johnson was inducted into the NASCAR Hall of Fame in its inaugural Class of 2010. He won 50 races in NASCAR's top division — the most of any driver without a championship — and added 132 victories and six championships as a successful team owner for many legends of the sport. Johnson won the second running of the Daytona 500 in 1960, then added two more triumphs in the Great American Race as a car owner in 1969 and '77.

His all-out style — honed from years of hauling illegal liquor at breakneck speeds through the North Carolina foothills — took a toll on his competitors and his own equipment, earning him a reputation as the hardest of the hard chargers. Johnson was also known as the Wilkes County Wildman and heralded as "The Last American Hero," after a brilliant 1965 essay in Esquire by author Tom Wolfe.

"Junior Johnson truly was the ‘Last American Hero,' " NASCAR Chairman and CEO Jim France said in a statement. "From his early days running moonshine through the end of his life, Junior wholly embodied the NASCAR spirit. He was an inaugural NASCAR Hall of Famer, a nod to an extraordinary career as both a driver and team owner. Between his on-track accomplishments and his introduction of Winston to the sport, few have contributed to the success of NASCAR as Junior has. The entire NASCAR family is saddened by the loss of a true giant of our sport, and we offer our deepest condolences to Junior's family and friends during this difficult time."

Born Robert Glenn Johnson Jr. in 1931, he became known simply as "Junior" as the fourth of seven children. His North Carolina home was the small community of Ronda, not far from Ingle Hollow, just a short drive from the North Wilkesboro Speedway, one of NASCAR's charter track.

Farming was a staple of the Johnson household, but so was the manufacture and high-speed transport of untaxed whiskey. Junior Johnson quickly became involved in both family businesses, sharpening his skills as a driver with his fearlessness in distributing liquor in hopped-up cars.

"The good whiskey runners were kind of cocky about it, like good race drivers," Johnson told the Associated Press in 1991. "I guess I was pretty cocky."

Legend has it that Johnson was never caught on the road. He was convicted of moonshining in 1956 after authorities staked out the family still. President Ronald Reagan pardoned him on Dec. 26, 1986. "No maybe about it. Best Christmas gift I ever got," Johnson told the Atlanta Journal-Constitution in 2007. Johnson now sells moonshine legally under the Midnight Moon label.

Johnson's earliest aspirations were first aimed at a different professional sport, but an accident cut those dreams short. "I'd probably have been a baseball pitcher if I hadn't broken my arm when I was 14," Johnson told the AP. "I broke it turning a farm tractor over on it, acting a fool."

Johnson's first stock-car event came by chance, according to North Wilkesboro Speedway founder Enoch Staley. At his brother's encouragement, Johnson temporarily put his plow aside and threw on some shoes to compete at his home track, which was then dirt. "We had scheduled a modified race, but didn't have enough cars to complete the field," Staley told the Associated Press in 1965. "So we invited the Wilkes County fans out of the stands to enter passenger cars and Junior ran in a 1939 Ford. That's how he got his start."

Johnson's first appearance in NASCAR's top division was on an even bigger stage, in the 1953 Southern 500 at Darlington Raceway. He finished 38th in the 59-car field, but gave the garage an early glimpse at his toughness. After his No. 75 Oldsmobile pirouetted off a guard rail, Johnson exited his crumpled car unharmed but noticed that the engine was on fire. Johnson quickly opened the hood, removed his shirt and batted out the flames himself.

By the time Johnson made a full-fledged go at stock-car racing, he quickly established himself as a winner. He prevailed for the first time at Hickory Speedway on May 7, 1955, adding four more victories by the end of his rookie season.

"I was crazy, I think," Johnson told NASCAR Productions in 2015. "I've never been scared in a race car, any other kind of car, because I thought I was a good enough driver to handle it. And I was."

Johnson's legend as a fierce competitor grew in the late 1950s into the '60s, taking a major leap with his Daytona 500 triumph in 1960. "I've driven in a lot of races, but this is my first big victory," Johnson told reporters after leading 67 of 200 laps and beating Bobby Johns for the win.

The significance of that win took on extra meaning with a discovery that is now superspeedway canon. During preliminary events at Daytona International Speedway, Johnson learned how to use the aerodynamic push and pull created by the air at high speeds. The technique of "drafting" was born, a tactic that Johnson initially kept to himself, later using it to help his year-old Chevrolet compete against the favored Pontiacs.

Johnson stayed tucked firmly behind Johns in the late going of that Daytona 500, the aero pull becoming so forceful that it popped the rear window from Johns' car. Johns lost control on the backstretch, allowing Johnson to pull away and lead the final nine laps.

"Heck, his whole car came up off the ground, spun around and went down to the infield and I went on and won the race," Johnson told Speed TV years later. "Everybody knew then by about the time the race was over with what I had done all day long was just drafted people, and that's how I got to where I was at."

Johnson accumulated wins for eight straight seasons into the 1960s, but never finished higher than sixth in the premier series standings, running only partial seasons throughout his career. His best season in terms of visits to Victory Lane came in his final campaign in 1965, when he won 13 of his 36 starts, including his final win as a driver at North Wilkesboro that October.

That same year, Johnson's impact was chronicled in Wolfe's groundbreaking article, "The Last American Hero is Junior Johnson. Yes!" The profile, a prime example of Wolfe's brand of "new journalism," introduced the country to Johnson's stature as an everyman icon in his native Wilkes County and a "lead-footed chicken farmer" while capturing America's growing love affair with the automobile. Wolfe colorfully heralded Johnson as "one of the last of those sports stars who is not just an ace at the game itself, but a hero a whole people or class of people can identify with."

Nearly five and a half decades later, the article remains an iconic piece of sports journalism. Johnson and Wolfe were reunited in New York in 2015 for a short film produced by NASCAR Productions. Wolfe died May 14, 2018, also at age 88.

"I didn't think that he would write the story that he wrote, but I thought it was an awesome story," Johnson said. "Things change, people change, but you don't want to ever forget how you were brought up. You'll remember it as long as you live. That article did that."

Even as his prominence grew, Johnson contemplated a transition from his driving days to team ownership. He entered just seven races in 1966, but began fielding cars that year for a host of young drivers, including an up-and-coming prospect named Bobby Isaac.

He was 35 at the time of his final race behind the wheel, ending his driving career while still in his prime.

"Racing has been good to me," Johnson told the AP in November 1965 as his driving days wound down. "I want to make it clear that I am not quitting because I am too old to drive or am afraid of high-speed racing. I have accomplished about everything I had hoped to as a driver. Now I want to relax and enjoy life, but still be connected with the sport in a supervisory capacity."

His ties to the sport endured for three more decades as a team owner, fielding cars for a host of future NASCAR Hall of Famers. Johnson's plan for relaxation never quite hit its mark, though, as he remained heavily involved in running his team, even wielding a jack over the wall for pit-stop duty.

Cale Yarborough scored three consecutive championships from 1976-78 in Johnson's familiar No. 11, winning 45 races over an especially prolific seven seasons together. When Yarborough opted to shift to a part-time racing schedule after the 1980 season, Johnson hired Darrell Waltrip and promptly won three more titles (1981, '82, '85) and 43 more races with the No. 11 in a six-season span.

Terry Labonte, Geoffrey Bodine and Bill Elliott also won in Johnson's cars. His last victory came in September 1994, with Elliott winning the famed Southern 500 at Darlington over Dale Earnhardt. Johnson sold his operations to Brett Bodine at the end of the next season.

Johnson's contributions to the sport lasted beyond his ownership days. NASCAR's top tour continued as the Winston Cup Series until 2003, a long-running entitlement sponsorship deal that Johnson helped broker in the early 1970s.

R.J. Reynolds, faced with a ban on television advertising in 1971, needed a new outlet for its marketing dollars. Johnson, whose shops were based 45 miles away from RJR's Winston-Salem headquarters, came calling but soon realized that its sponsorship reach was much greater than simply investing in a team.

"They told me they had millions of dollars to spend," Johnson told Steve Waid for a 2016 article in Popular Speed. "Now, I wanted some of that. But it occurred to me that if I made a counter proposal, it could benefit NASCAR and everyone in racing — including me." The business connection that followed ushered in a great period of growth in NASCAR, giving stock-car racing a healthy points fund and a greater foothold that expanded outside its Southern roots.

Johnson was enshrined in the NASCAR Hall of Fame in its first class in 2010, joining Bill France Sr. and Jr., Dale Earnhardt and Richard Petty as the inaugural inductees. He remained involved with the NASCAR Hall for years afterward and contributed an operational moonshine still as an exhibit for the museum's Heritage Speedway section.

He was presented for induction by his son, Robert, on a night of stories about Johnson's decades-long dedication to stock-car racing.

"We have lost one of NASCAR's true pioneers, innovators, competitors and an incredible mechanical and business mind. And personally, I have lost one of my dearest friends," said Winston Kelley, the NASCAR Hall of Fame's executive director. :While we will miss Junior mightily, his legacy and memory will forever be remembered, preserved, celebrated and cherished at the NASCAR Hall of Fame and in the hearts and minds of race fans around the world. Please join us in remembering and celebrating Robert Glenn Johnson Jr." NASCAR PR