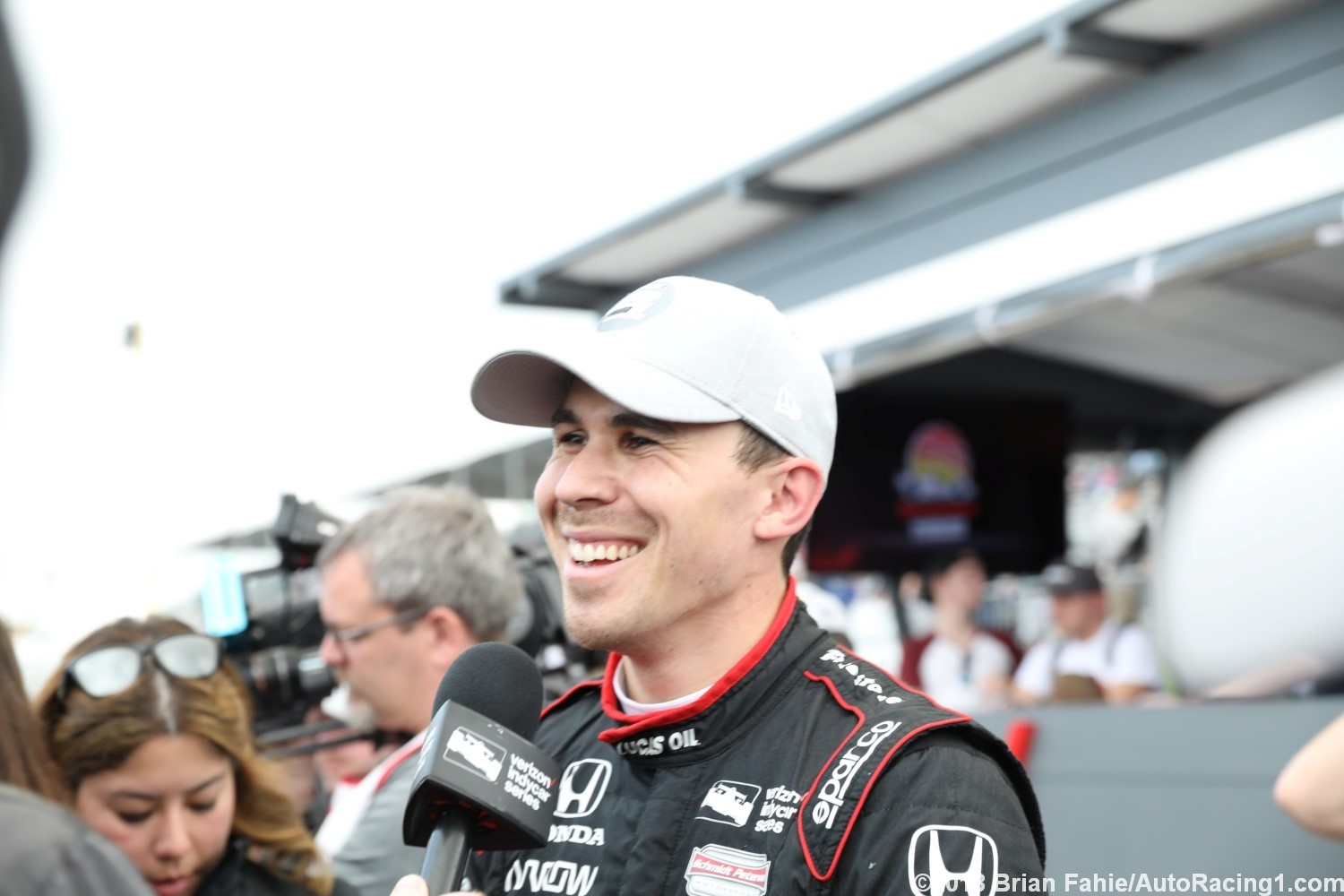 With an expiring television deal, a departing title sponsor and the much-anticipated debut of its latest racing spec, no question about it: the Verizon IndyCar Series needed a boffo debut to the 2018 season this past weekend. And to the series’ credit, they got just that in their annual visit to the Streets of St. Petersburg.

Today, AutoRacing1 will look back at all the major stories from this weekend’s Firestone Grand Prix of St. Petersburg starting with the debut of the new car.

If you remember, it was three years ago at the Firestone Grand Prix of St. Petersburg when similar to this past Sunday, IndyCar debuted its then latest concept of the Dallara DW12, the long-awaited body kits from Honda and Chevrolet. You probably also remember that debut didn’t go so well.

Following three years of rather stiff competition at the front of the field after the advent of the DW12, the 2015 St. Pete race saw Team Penske sweep the top-4 qualifying positions before securing four of the top-6 finishing spots in the race. Furthermore, bits and pieces of the clumsy looking aero kits regularly detached from the car during the race resulting in extended periods behind the pace car. Even worse, a piece of debris came detached from one of the cars striking and injuring a spectator.

But the aero kits not only pulled off the trifecta above, but did so at the expense of tens of millions of dollars in costs to the teams all of the above after the teams and manufacturers. And the specter of self-destruction long associated with American Championship Racing was more than alive and well.

This past weekend’s installment of the Firestone Grand Prix of St. Petersburg was quite a different story.

Following the three-year aero kit era, INDYCAR opted for a different direction last summer. Deciding less was more, the klunky add-on pieces that characterized the aero kits, were replaced by a sleeker, trimmed-down wings on the front and the rear meaning about 25% less downforce, harder to driver cars, and a look resembling that of a more traditional Indy car. When photos of the new design began to circulate the interweb, approval from the racing community was near unanimous. Furthermore, in contrast to the aero kit design, which transferred the air over the car, the 2018 design sought to push more of the air beneath the car meaning less turbulence for the trailing car, and hopefully, more overtaking.

And going by this past weekend’s race, the latest installment of the DW12 did not disappoint in the least. With a clean slate, the reset button has at least for now, been nothing but a charm. Newcomer Robert Wickens would score a shock pole position Saturday. While six-time St. Pete pole winner Will Power qualified second, the second row for Sunday’s race would be occupied by newcomers Matheus Leist and Jordan King respectively.

So, to take some quick inventory, INDYCAR managed to design a racier car that has leveled the competition (at least for now), put a greater emphasis on the driver, allowed for greater overtaking opportunities, and reduced costs for the teams?

Judging from Sunday, the answer is a clear, yes. Give Jay Frye and his team an A+. In direct contrast to the debut of aero kits three years ago, the rollout of the reimagined (do you like my Brian France lingo there?) DW12 was an unquestioned smashing success. Well done to all involved.

The most notable showcase for the new car happened to come at the end of the race between then-leader Robert Wickens and 2nd place Alexander Rossi. And by now, I’m going to assume you know what happened. Rossi took advantage of a poor restart by Wickens and dove to the inside entering turn 1. The 2016 Indianapolis 500 winner lost the back end of the car and made contact with Wickens. Rossi managed to bring the No. 27 Honda home third while a damaged Wickens limped home to finish 18th.

Dale Coyne Racing’s Sebastien Bourdais who was third on the final restart opportunistically moved the lead on his way to scoring his second straight win at St. Petersburg.

And much to the chagrin of many (include me amongst them), Rossi was not penalized for the contact with Wickens. Now, Rossi mentioned in his post-race interview that Wickens put him into the marbles “pretty late into the corner," and yes, Wickens did make a move initially to defend in what could be considered a block.

But he also allowed Rossi plenty of room (as in like 2/3 of the track) as the two approached the corner. And when they entered turn 1 it was Rossi who did not keep his car under control, the back end of the No. 27 Honda sliding into Wickens, who had left the Andretti Autosport driver room. And if you agree that Rossi caused the contact (I’m not sure how anyone could argue the contrary), you have to assume a penalty is warranted. After all, the INDYCAR rule re: Avoidable Contact reads:

We heard every excuse in the book to ignore the contact. Eddie Cheever (I’ll get to ABC momentarily) told us Rossi was going for the win, while others noted that the painted lines on the track were slippery (as if professional race car drivers can’t be expected to avoid slippery spots). Also, I know a penalty for Rossi would not have meant didly squat for Wickens, as the deed had already been done.

And if you want to do the word-parsing game, I suppose that what constitutes “responsibility" when it comes to initiating contact is not entirely clear in the rule above. Further, failing to demonstrate such responsibility – whatever that exactly means – is not an automatic penalty, and only “may" result in being penalized.

The above noted, Rossi was clearly the “overtaking competitor" with whom “primary responsibility resides." Furthermore, it wasn’t as if Rossi and Wickens were going for the same piece of real estate with both cars under relative control a la say Al Unser Jr. and Emerson Fittipaldi at Indy in 1989, where one happened to come out intact. That happens in racing.

Rather, it was Rossi who lost control and initiated contact. Sorry, but that’s a CLEAR AS DAY penalty folks, even if you word parse INDYCAR’s Rule Book. While I have very high regard for the capabilities of young Mr. Rossi, INDYCAR swallowed the whistle on this one. And there’s no way Rossi should have been on the podium after punting Wickens right out of the way.

Speaking of the restart, I get why INDYCAR tried to fast track it so to speak. But it clearly did not follow normal procedure, and from what I gather the series rule book.

7.7.1.2 After the starter gives the “one (1) lap to go" signal and prior to the restart, Cars must line up in single file formation with no gaps or lagging between Cars. In the event of a restart with 15 laps or less remaining, all Cars not on the lead Car lap will be moved to the rear of the Restarting Lineup.

That would appear to imply that the starter must give a “1 to go" signal for there to be a restart. That clearly didn’t happen.

7.7.1.3 At the appropriate time, the Pace Car lights will be turned off, indicating the intent to restart the Race….

Whatever the “appropriate time" so happens to be, it can be argued it never came in this car as the Pace Car lights never switched off prior to the final restart.

Again, I get IndyCar wanting to finish under green. However, the way to do that properly is to have a clear procedure in place for how a race will restart. Granted, this procedure can be different for different circuits, and for different points of the race. But there needs to be greater clarity with the procedure, and the rules as written need to mean something else what good is it having rules?

Unfortunately, what happened Sunday had all the makings of a USAC style “make up the rules as we go" circus from years ago.

Less than optimal application of the rules aside, it was a smashing start to the season for the Verizon IndyCar Series. Sadly, given the low energy and indifferent broadcast from ABC it’s not like anyone would have known. Once again, the ABC broadcast was predictably, awful. And while there are a lot of topics I can delve into, I’ll focus on this one.

Aside from possessing pictures of high ranking Hulman & Co. members in some very incriminating act, how on earth Eddie Cheever and Scott Goodyear continue to appear on ABC IndyCar broadcasts? Both are incredibly low energy. Both have awkward deliveries. Neither possesses any unique or defining feature. Neither is at all funny. Both are despised by IndyCar fans.

Now, I can slam those two all day but ultimately, the powers to be at Hulman & Co. have heard IndyCar fans (and presumably me) on this subject. And at this point, I’m sorry but the continued presence of Goodyear and Cheever on the network broadcast can only be interpreted as a big F*** You to the series’ loyal fans by management.

The general theme of the DW12 era has been something of a ping pong effect. And while Chevrolet has won 5 of the 6 series championships, generally speaking, the competitive parity between the two has been pretty good.

Don’t look now, but Honda took the top-6 spots and seven of the top-9. And it would have been even better had Rossi not dumped Wickens. And while I’ll reiterate that I fully expect a strong Chevrolet response, St. Pete was a Honda butt-whupping.

Now, I’m not an engineer so I’m not going to offer any grandiose theses as to why Honda was so strong. But I do know a certain President of a certain prominent publication texted me this weekend saying “look at those Hondas fly without those butt bumpers acting like parachutes."

And this will certainly be a subject worth following as the season moves along.