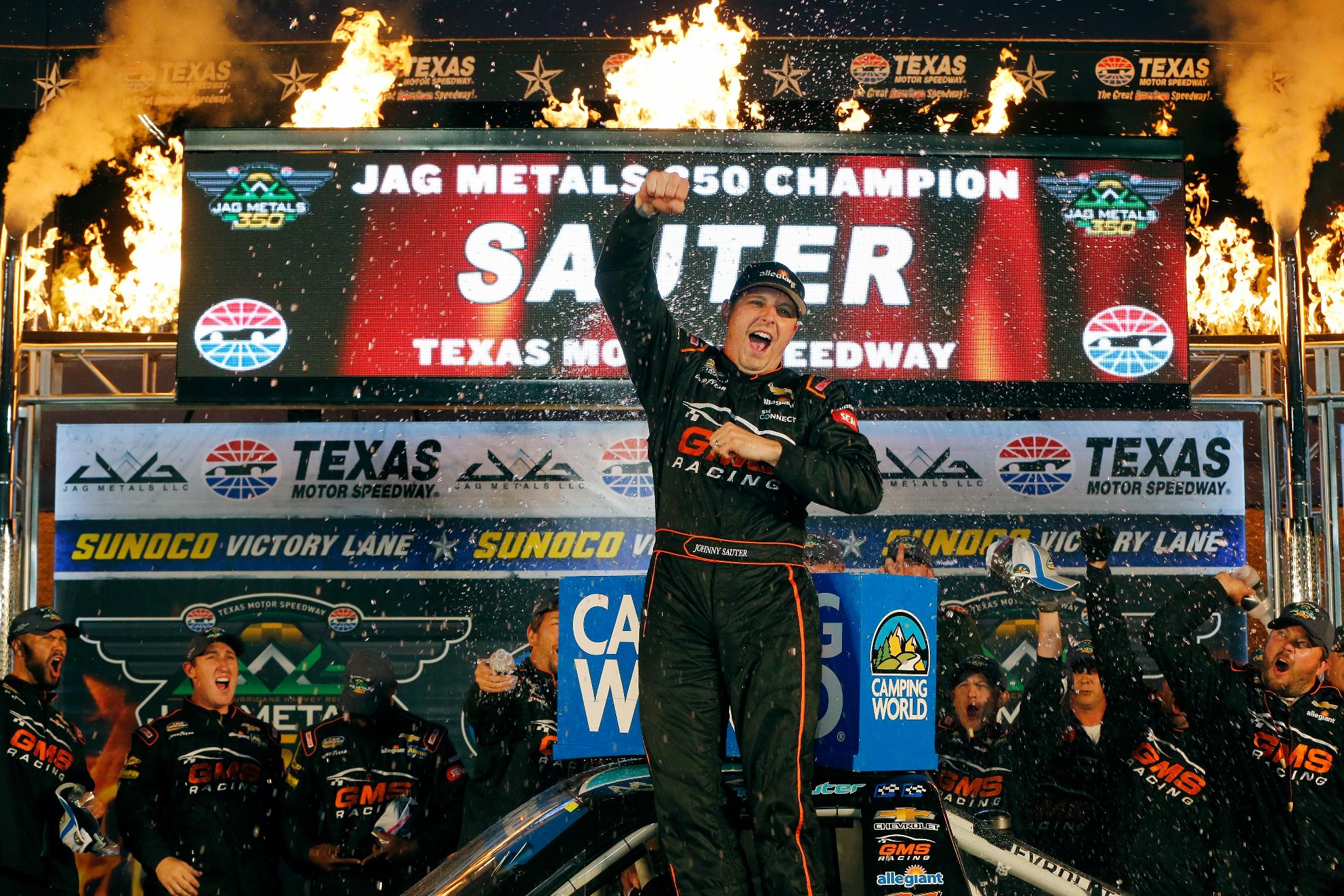 It was a case of déjÃ  vu for Johnny Sauter on Friday night at Texas Motor Speedway.

After taking over the lead on Lap 135 of 147 of the JAG Metals 350 Driving Hurricane Harvey Relief, when John Hunter Nemechek ran out of gas while leading at the end of a cycle of green-flag pit stops, Sauter kept fellow Round of 6 Playoff driver Austin Cindric behind him and crossed the finish line .170 seconds ahead of his closest pursuer.

Sauter had passed Cindric for the lead on Lap 109, charging around the outside of the No. 19 Ford into Turn 1. The drivers ran 1-2 until they pitted on Lap 117 to start the pit stop cycle. Attempting to stretch fuel mileage, Nemechek ran out of gas 12 laps short and saw his championship hopes dim considerably.

Sauter won the Playoff race at Texas for the second year in a row and the fourth time overall. With his third win of the season, he raised his career victory total to 16 in the series and guaranteed a run for the title at Homestead.

"It's unbelievable," said Sauter, who celebrated the birth of a daughter, his third child, earlier in the week. "I was actually pretty worried about our truck after qualifying – it was pretty loose. And all we did was lower the track bar a half-round."

Sauter said after the race he would like to think the season is following the same course as last year, but he'd prefer to stay in the moment.

"I'm a realist, and I know you have to execute," Sauter said. "Yes, this is looking a lot like it did last year, shaping up like it is. Honestly, this is our third win this year. I think we should have six or seven right now…

"We've got to be humble and stay nose to the grindstone, so to speak. You can't let your guard down."

The 19-year-old Cindric felt he ran the best race of his career on a mile-and-a-half track, but he couldn't find a way around the 39-year-old Sauter at the end.

"I think it was youth versus experience tonight, and experience won, in more ways than one," said Cindric, who moved into fourth place in the standings with the cut to four Championship 4 drivers looming next Friday at Phoenix.

"Johnny taught me a few things, but he basically taught me while he passed me for the race win."

Bell owns a four-point lead over Sauter in the series standings, with two-time champion Matt Crafton 31 points back in third.

Trouble on a late pit stop dropped Ben Rhodes to 18th at the finish and out of the top four in the standings. Nemechek ran 19th and, for practical purposes, must win next Friday at Phoenix to advance to the Championship 4 race.