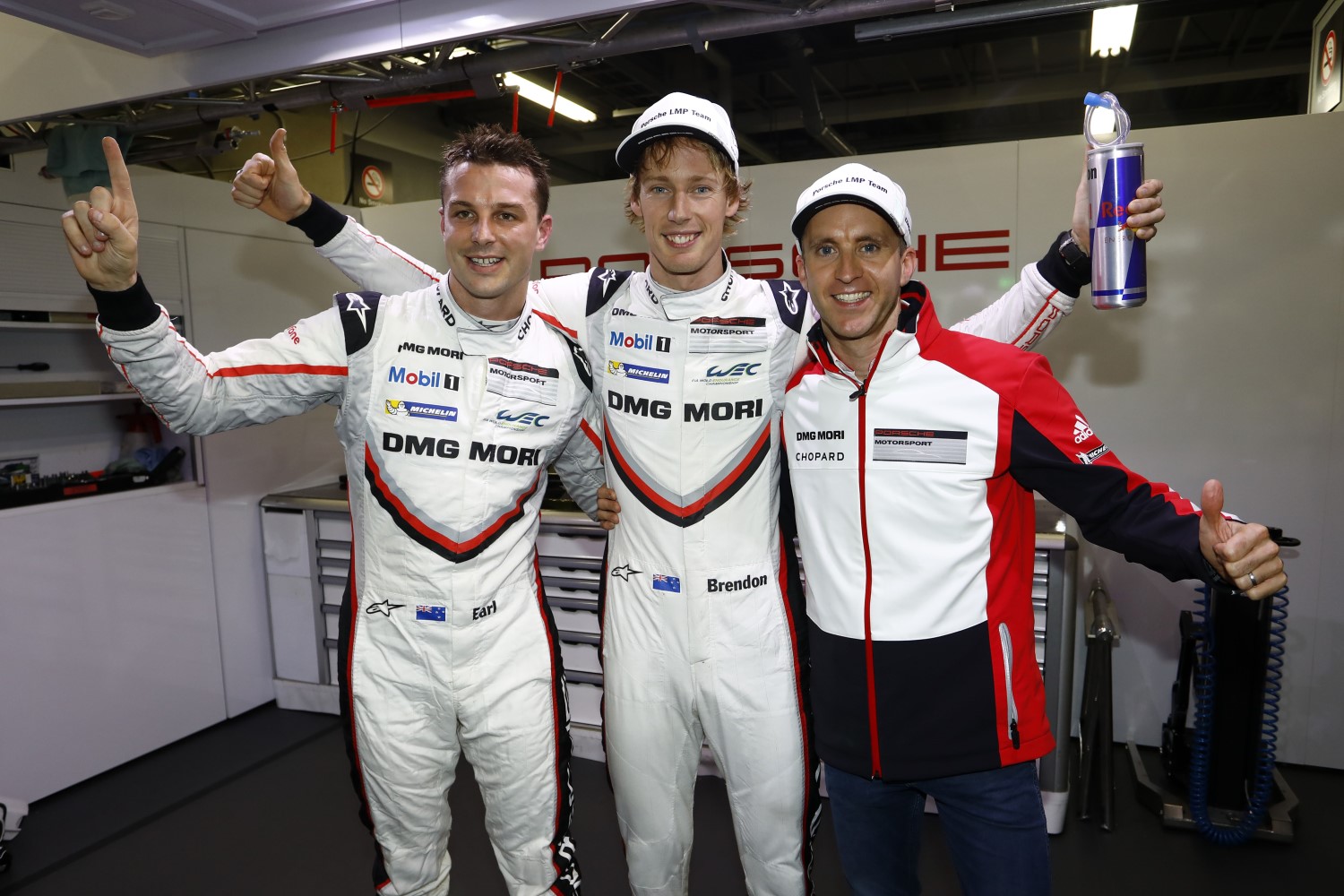 The two Porsche 919 Hybrids will start from the front row for the six-hour race at the Fuji International Speedway. Championship leaders Earl Bamber (NZ), Timo Bernhard (DE) and Brendon Hartley (NZ) took pole position in front of the sister car in the hands of reigning world champion Neel Jani (CH), Andre Lotterer (DE) and Nick Tandy (GB). It is the 19th pole position for the 919 Hybrid since its race debut in 2014 and the fourth in 2017.

The weather situation in Japan remains the main topic of the seventh of nine rounds of the FIA World Endurance Championship (WEC). With the track being wet at varying levels in all practice sessions, it was difficult to get the cars’ set-up right. To avoid an approaching downpour, qualifying was advanced by half an hour but it still rained. For the race on Sunday, 11:00-17:00 hrs local time, more rain is forecast.

Qualifying drivers this time were Bamber and Hartley for car number 2. The average of their best lap times was 1:35.160 minutes. Lotterer and Tandy at the wheel of car number 1 came second with an average lap time of 1:35.231 minutes.

TOYOTA GAZOO Racing frustratingly missed a home pole position during an unfortunate qualifying for the 6 Hours of Fuji, the seventh round of the 2017 FIA World Endurance Championship (WEC).

The #8 TS050 HYBRID of Sebastien Buemi, Anthony Davidson and Kazuki Nakajima showed the speed to earn pole but were twice delayed by traffic and finished third fastest, 0.195secs away from the leading Porsche #2.

Mike Conway, Kamui Kobayashi and Jose MarÃ­a Lopez in the #7 TS050 HYBRID suffered a difficult session on the wet track and will start fourth.

Piquet Jr. beat teammate Bruno Senna by three tenths after the first runs and then Heinemeier Hansson had more than a second in hand over Julien Canal in the sister ORECA-Gibson 07.

That time was four tenths up on the Ganassi Ford GT driven by Andy Priaulx and Harry Tincknell.

[adinserter name="GOOGLE AD"]Earl Bamber
It is fantastic to get another one-two for the team and to get my first ever pole position in the WEC. To share with BH, a fellow Kiwi as well, is very special for me. It was a hard fight with car number 1. They really threw everything out of their window and we both were backed up as well. It was a great effort from the team and from Porsche."

Brendon Hartley
It could be any conditions for the race tomorrow, perhaps even with monsoon conditions coming. This one point we got for pole position today could prove to be very crucial in the fight for the championship title. Lap times in qualifying were pretty close and we are obviously very happy with the result.

Neel Jani
Today I only did a few laps in free practice three. There was a lot less water on the track than yesterday, but somehow it was very greasy. We have to analyse why it was so slippery. The rest we will see. Regarding the weather, tomorrow will be a kind of survival training.

Andre Lotterer
It was very slippery on the wet track. Unfortunately we just missed out on pole position. I tried a second attempt but got stuck in traffic. It didn’t work out. But, of course, another 1-2 in qualifying for Porsche is good.

Nick Tandy
Qualifying was really difficult in the wet conditions because you obviously don’t want to make a mistake as you need to put a lap time in but you still need to push. In the end we got the fastest lap times with both our cars. I’m especially pleased for Earl as it is his first pole position in WEC and it is good the number 2 car got the one point for the championship as well.

Sebastien Buemi
It’s really a pity because we had the pace to go for pole. Unfortunately I had traffic with the Porsche on the first lap when the tires were at their best and because of that we couldn’t challenge for pole. I think we had the fastest car today but couldn’t show it, so I’m disappointed. But I’m looking forward to tomorrow because I’m sure we’ll be in the fight.

It was a close session. Like Sebastien, I had traffic on my lap which cost me time and at the end of the day it kept us off the front row. It’s a pity because I think we could have got pole position but that’s life. We will try our best tomorrow to give our home fans the win we are all fighting for.

Kamui Kobayashi
It wasn’t a great qualifying for us; we expected a lot better. Since the morning we have been struggling with the car so we need to find the issue and improve it for the race. It’s a bit strange; we need to work out what happened.

Jose Maria Lopez
I thought I did a good lap but we were off the pace. We changed the tire spec for Kamui but he only improved a bit so we need to find the problem and solve it for tomorrow. I’m not worried about starting fourth as long as the car is strong for the race but it’s disappointing to see the gap to the sister car.