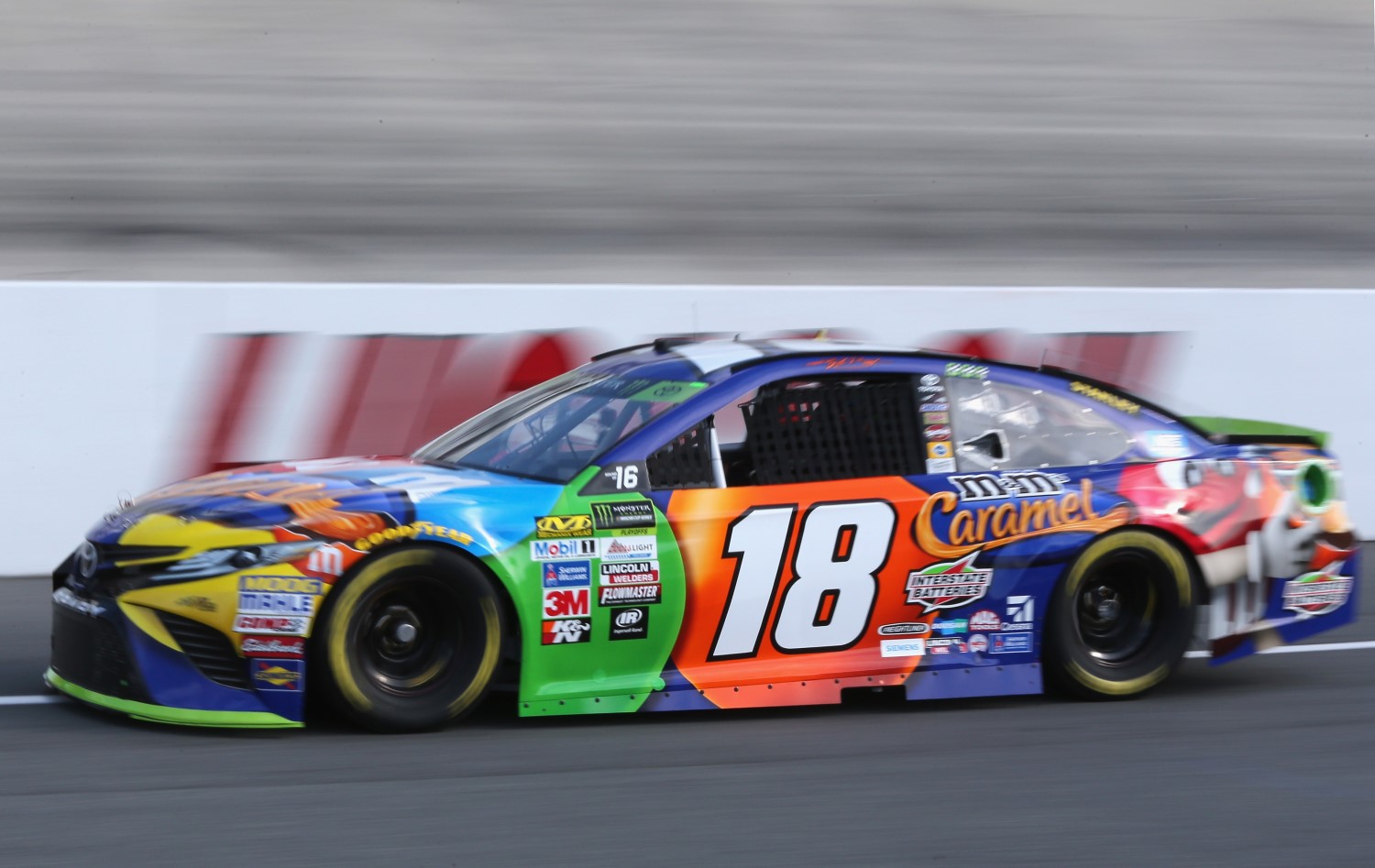 Call him the Grinch.

Halloween may be the next holiday on the calendar, but Kyle Busch stole Christmas morning from Chase Elliott late on Sunday afternoon at Dover International Speedway.

Running Elliott down from more than four seconds back in the last 40 laps of the Apache Warrior 400 at the Monster Mile, Busch powered his No. 18 Joe Gibbs Racing Toyota around the outside of Elliott's No. 24 Hendrick Motorsports Chevrolet and cleared him off Turn 4 as the cars approached the white flag.

A lap later, Busch had his second straight victory in the Monster Energy NASCAR Cup Series Playoff, leaving a disheartened Elliott still in search of his first victory in the series and agonizing over what he might have done differently.

Though Elliott was inconsolable, there were plenty of positives in his performance. The Hendrick cars showed real speed for the first time since the Playoff began two weeks earlier at Chicagoland, and Elliott moved on comfortably to the Round of 12.

Not as fortunate were Ryan Newman, Austin Dillon, Kasey Kahne and Kurt Busch, who were eliminated from the Playoffs, as Ricky Stenhouse Jr., claimed the 12th and final spot in the next round by two points over Newman, thanks to a risky-but-serendipitous pit call by crew chief Brian Pattie.

But it was Busch who stole the show and stole the race, running the top line as he sliced into Elliott's advantage and diced his way through traffic more adroitly than his less experienced rival.

"Man, I saw that carrot out there, and I wanted to go and get it," said Busch, who won for the fourth time at Dover and the 42nd time in his career. "I got within five lengths and I stalled out and I was like, 'Oh, man, I think that was it,' you know? But I got back to the top and got enough momentum back rolling. Chase was kind of plugged up with the lapped cars in front of him, so I think the lapped cars actually helped us with that one.

"But, overall, just great day for us. Great job by the team being able to get in Victory Lane here in Dover. It's been a long time since we've been in Victory Lane here, and it's hard to come by wins here because (11-time Dover winner) Jimmie (Johnson) takes up all the darn Monster trophies. But it's nice to have a third or fourth in my collection – I can't remember."

Johnson, who finished third, tried to console his teammate, but Elliott felt he let his team and organization down when he failed to beat Busch to the finish line.

"I thought if I had a clean track, I could have run as fast as he did, but I didn't, and I should have done something different," said Elliott, still despondent when he arrived at the media center for his post-race interview. "So that's just on me, and he did a better job than I did. At the end of the day that's what it comes down to…

"Man, such a bummer, such a disappointment for my team. I don't really have a whole lot to add."

But it was Stenhouse who won the nail-biter. But for Pattie's decision to keep the No. 17 Roush Fenway Racing Ford on track as long as possible during a cycle of green-flag pit stops late in the first stage, Stenhouse would have been eliminated.

As luck would have it, Jeffrey Earnhardt spun into the barrels protecting the entrance to pit road on Lap 86 to cause the first caution of the race one circuit before Stenhouse was scheduled to pit. The fortuitous yellow left five cars on the lead lap and gave Stenhouse the track position he needed to score seven points as the fourth-place finisher in Stage 1.

That gave him the edge he needed over Newman.

"We caught the caution there right at the right time with a perfect amount of laps left in the stage to get stage points and that was the turning point of the day," said Stenhouse, who battled back from disaster at Chicagoland and a lackluster run at New Hampshire. "Our Fastenal Ford was definitely not close to what we needed, especially the last two runs. We were close before the last two runs and made some adjustments there and really fell off.

"All in all, like I said, I feel lucky that we had all the mistakes at Chicago and really not a good car at Chicago, Loudon or Dover but we still made it in. Really, it's hats off to the guys for fighting all day, and it's nice that the round starts over."

Is this what you race for?

"Yeah, no doubt. Yeah, it is. It's no doubt the moment that you live for. It's the moment that all these guys live for and what we with do with this M&M's Caramel team and this Toyota Camry was not the best there early on, but we made a lot of gains on it and got it where it was really good there at the end and I was making the most out of it there and being able to run the top and get some speed going with some momentum around the top side and I can't say enough about Chase (Elliott). I mean, he's an awesome competitor and great kid, great friend. I raced with him in late models and coming off of (Turn) 2 there, you know, he could have pulled up and checked up my momentum. I did kind of check up because I wasn't quite sure, but then he gave me a enough room and I put it back down and just kept my momentum up there, got along side of him and get ready for the entry to (Turn) 3."

What made the difference at the end?

"Just we kept working on it all day long. We kept making adjustments to it every pit stop, every chance we got and Adam (Stevens, crew chief) and the guys did a really, really good job of that and I think the biggest thing there at the end was just having a little bit fewer, fresher lap tires than Chase (Elliott) did and I wasn't sure if it was going to be enough when I got close. I got within five lengths and I stalled out and I was like, 'Oh, man, I think that was it,' you know? But I got back to the top and got enough momentum back rolling. Chase was kind of plugged up with the lap cars in front of him, so I think the lap cars actually helped us with that one, but overall just great day for us. Great job by the team being able to get in victory lane here in Dover. It's been a long time since we've been in victory lane here and it's hard to come by wins here because Jimmie (Johnson) takes up all the darn monster trophies, but it's nice to have a third of fourth in my collection – I can't remember."

What did you not like early in the race?

"The biggest thing was just getting looser with laps. I thought everybody was getting looser with laps, but it just seemed like me for whatever reason whenever I get too loose I just get really loose and I was just trying to hang on for all it was worth and being able to make sure that I can have a good car on the long runs and I let a lot of guys go in the mid-part of the run, but I could never get them back in the long haul, so it was always best to keep anybody that was coming behind you behind you and then, you know, having the car tight enough to be able to hold them off."

How do the next three races set up for you?

[adinserter name="GOOGLE AD"]"We've got to win Charlotte. Apparently, I haven't won there before, so I need to go get that win and check that one off the list and that will put us into the next round and we'll go from there."

The following drivers advanced to the Round of 12, with seeding and points after Dover: