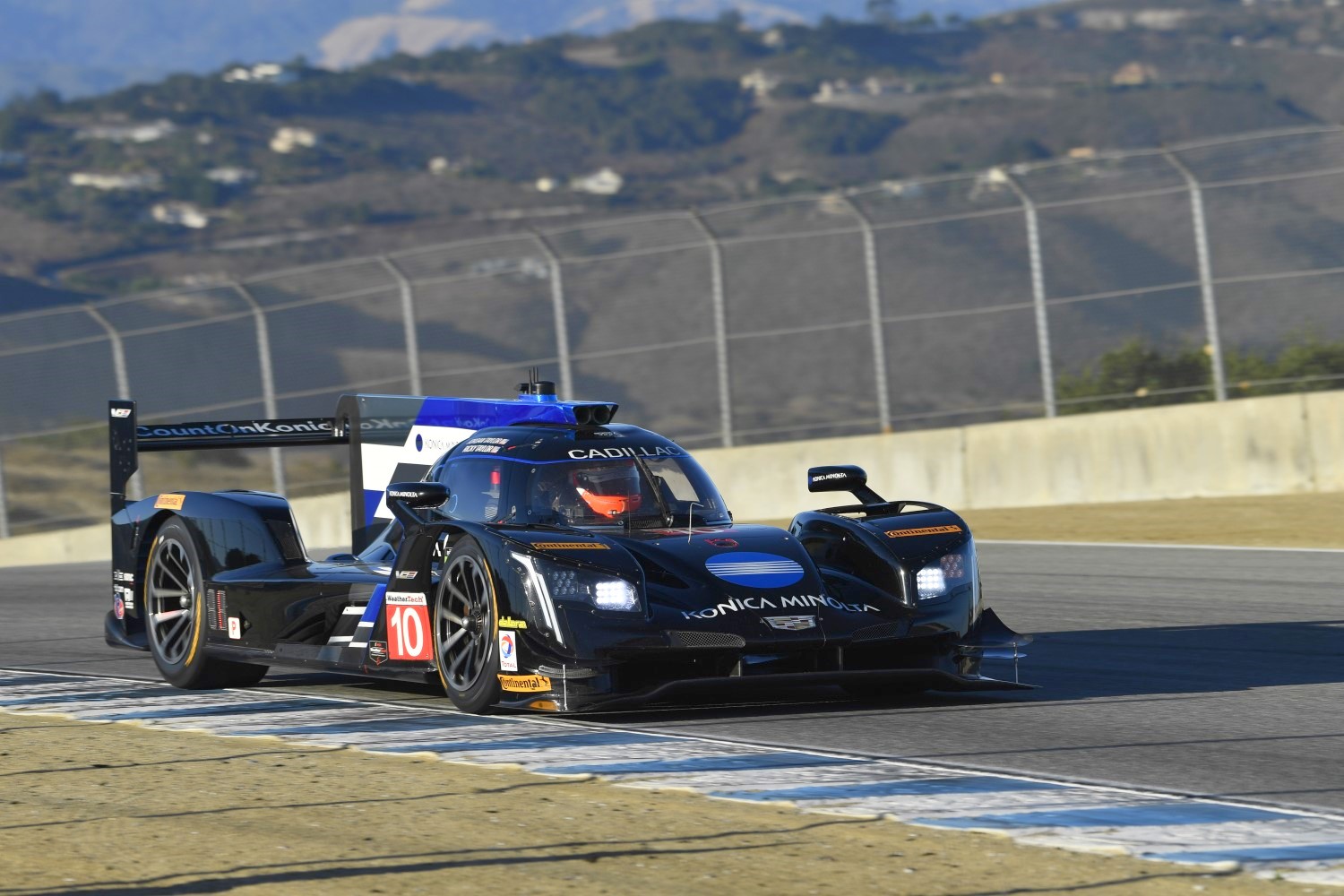 With an IMSA WeatherTech SportsCar Championship Prototype class title in sight, Ricky Taylor and the No. 10 Konica Minolta Cadillac DPi-V.R. team put its closest championship competitors on notice in qualifying Saturday for the AMERICA’S TIRE 250 at Mazda Raceway Laguna Seca, the penultimate round of the season.

Ricky Taylor – who enters the weekend with a sizeable, 26-point lead alongside brother and co-driver Jordan Taylor – scored his fifth TOTAL Pole Award of the season, lapping the 2.238-mile Mazda Raceway circuit in one minute, 16.853 seconds (104.833 mph). That lap was 0.829 seconds ahead the team’s closest championship competitor and second-place qualifier, the No. 5 Mustang Sampling Cadillac DPi-V.R. of Christian Fittipaldi.

“Tomorrow is going to be really important for the points, we need to keep our noses clean and get through safely," said Ricky Taylor. “We want to win more than anything. We want to go to Petit [Le Mans] with another win under our belt and go for the win there.

[adinserter name="GOOGLE AD"]“We’ve had a lot of fast cars here at Mazda Raceway Laguna Seca and I think this Cadillac is really strong this weekend. That’s what I love about our Konica Minolta guys. They keep looking for more speed and they keep finding it. It makes my brother, Jordan, and my job easier to go out there and execute. It takes a lot of the pressure off."

The No. 10 team also topped the charts in two of the weekend’s three practice sessions. Their closest competition Sunday, however, may come from their championship rivals.

While Fittipaldi’s lap of 1:17.682 (103.175 mph) fell short of the pole, he and co-driver Joao Barbosa have one win and four podium finishes on the season. The duo enters Mazda Raceway trailing 258-232 in the Prototype standings and needs a top-five finish to remain championship eligible if the points-leading Taylors were to win the race.

The No. 31 Whelen Cadillac DPi-V.R. of Dane Cameron and Eric Curran also enters the weekend mathematically in contention for the championship, 31 points back, and will roll off the grid fourth.

Rounding out the top three was Marc Goossens in the No. 90 VISIT FLORIDA Racing Ligier LM P2, with a lap of 1:17.730 (103.651 mph). It was a season-best qualifying effort for the Daytona Beach-based team that recently suffered damage to its race shop during Hurricane Irma. Goossens will be joined Sunday by co-driver Renger van der Zande.

The headline race of the Continental Tire Monterey Grand Prix weekend will be televised live on Sunday at 5 p.m. ET on FS1. IMSA Radio also will have live, flag-to-flag coverage on IMSA.com, RadioLeMans.com and SiriusXM Radio.

The most recent pole for the Risi team prior to Saturday came courtesy of Pierre Kaffer at VIRginia International Raceway in 2014, a race the team went on to win the following day. Vilander and co-driver Giancarlo Fisichella – who also was part of the 2014 VIR driver lineup – will look to duplicate that performance in Sunday’s two-hour, 40-minute race.

“The GTLM field is so tough nowadays that you need to have everything in the right place," Vilander said. “You need to have the right tires, you need to be exactly spot on with the setup of the car. We’ve been doing a good job the whole year. We’ve been performing well. We had some unfortunate races and unfortunate situations during the season, but it shows again the potential of the team and the car. Today, it was just a pleasure to drive the car."

Vilander outqualified his next closest GTLM competitor, Dirk Mueller, by 0.242 seconds. Mueller’s best lap was a 1:22.156 (98.067 mph) in the No. 67 Ford Chip Ganassi Racing Ford GT he shares with Sacramento’s Joey Hand competing in what amounts to a “hometown race" in Monterey.

Eight of nine cars in GTLM qualified within one second.

When it comes to IMSA WeatherTech SportsCar Championship GT Daytona (GTD) qualifying lately, the race car of choice has been the Lamborghini HuracÃ¡n GT3.

Madison Snow and the Paul Miller Racing team reinforced that point once again on Saturday at Mazda Raceway Laguna Seca, earning the fourth consecutive GTD TOTAL Pole Award for Lamborghini in qualifying for Sunday’s AMERICA’S TIRE 250. Snow turned a best lap of 1 minute, 24.469 seconds (95.381 mph) around the 2.238-mile circuit in the No. 48 Lamborghini and will lead a 16-car GTD field to the green flag just past 2 p.m. PT Sunday afternoon.

“The fourth pole for Lamborghini is a big thing," Snow said. “For sure, it’s different than winning the races, four races in a row. It means we have the pace, but it’s hard to go into the race and see where we go. Hopefully, we’ll do good. Starting on the pole, it’s a difficult track to pass on with the amount of grip the track has, just due to the sand and the temperature environment that we have here. Hopefully, it makes it a lot more difficult for us to be passed by other people."

The pole was the second of the year and third of Snow’s WeatherTech Championship career. He started the current four-race pole streak for Lamborghini in qualifying for July’s Northeast Grand Prix at Lime Rock Park. The other two Lamborghini poles came from Jeroen Mul in the No. 16 Change Racing HuracÃ¡n at Road America and VIRginia International Raceway in August.

It was the 10th WeatherTech Championship pole for Paul Miller Racing and the third of the year for the team, as Snow’s co-driver, Bryan Sellers, claimed the TOTAL Pole Award in April’s BUBBA burger Sports Car Grand Prix at Long Beach.

Snow will share the GTD front row with 2017 Rolex 24 At Daytona winner Daniel Morad, who qualified the No. 28 Alegra Motorsports Porsche 911 GT3 R second with a best time of 1:24.721 (95.098 mph). Morad’s co-driver for the weekend is Porsche factory driver Patrick Long.

Porsches took second and third in GTD qualifying, as Patrick Lindsey put the No. 73 Park Place Motorsports 911 GT3 R third on the grid at 1:24.954 (94.837 mph). Lindsey and co-driver Joerg Bergmeister will go in search of their second GTD victory of the season on Sunday. They previously won at Lime Rock Park.

The top five cars in GTD were covered by less than one second.