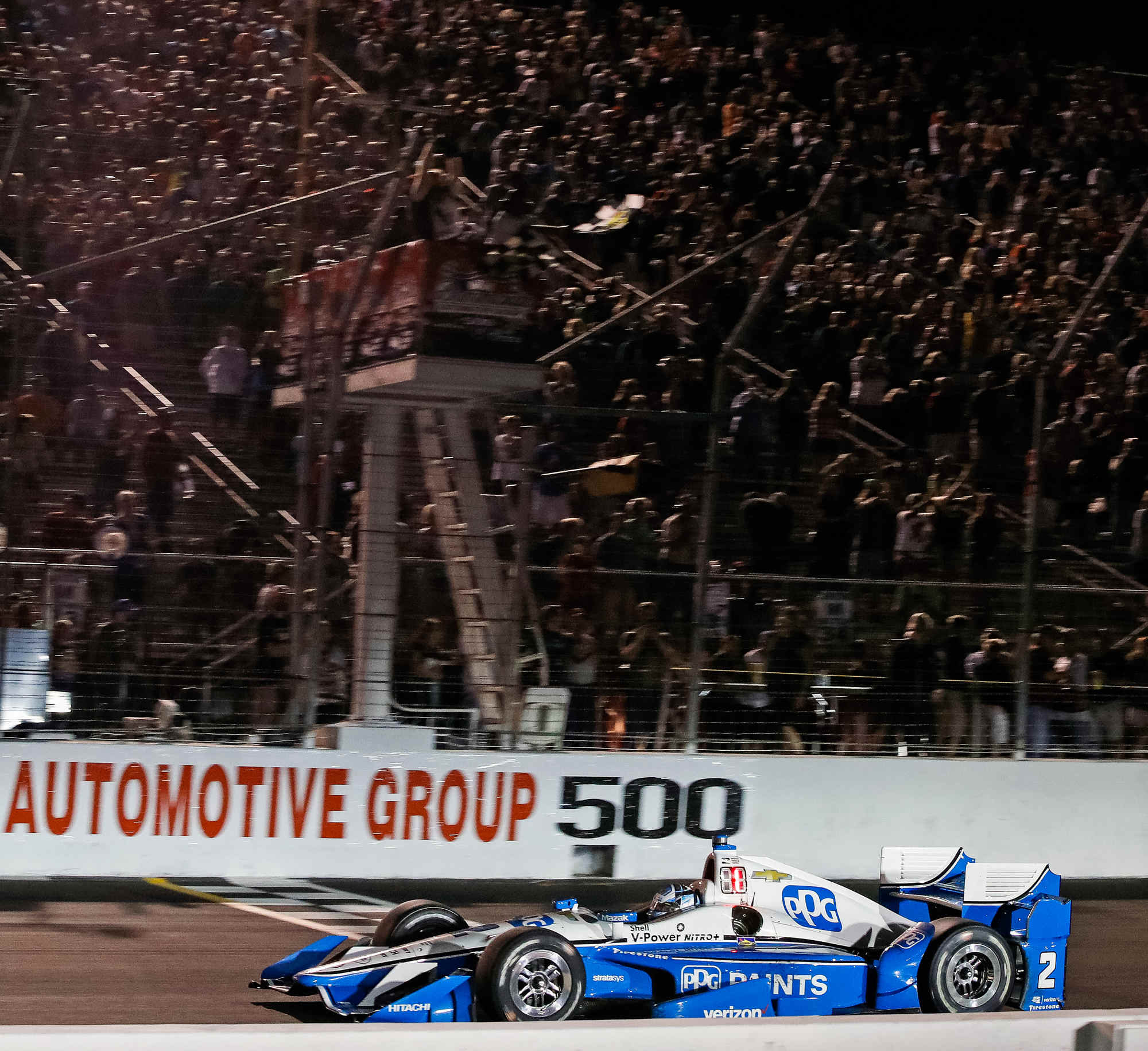 Well, there’s only one place to start with Saturday evening’s Bommarito Automotive Group 500 at Gateway Motorsports Park: the lap 218 contact between Team Penske teammates Josef Newgarden and Simon Pagenaud. So, let’s get to it.

To briefly recap, following a lap-206 pit stop, Pagenaud was able to jump Newgarden and take over the race lead. The Frenchman would stay at the front until lap-218 when the Hendersonville, TN native pulled off an aggressive inside move in turn 1, which resulted in contact between the teammates. Newgarden took over the lead where he would remain for the final 30 laps.

Pagenaud managed to keep the No. 1 Menards Team Penske Chevrolet out of the fence and would ultimately take the final step on the podium behind Newgarden and Dixon. And as you would expect, Newgarden and Pagenaud had very different views of the situation.

We’ll start with Newgarden’s perspective, which is in my opinion very simple: he’s a race car driver, and race car drivers are more than anything not motivated by championships or doing well by their teams, but winning races. It didn’t matter that it was a teammate ahead, a close championship rival behind, or whatever else, Newgarden saw a chance to move into the lead on a track where overtaking is at a premium and went for it.

While some pointed out that caution may have been the better part of valor given his championship position and the fact it was his teammate, my experience with race car drivers is they well, wouldn’t be race car drivers if they thought in such terms. And if there does ever happen to be a question as to which course of action to pursue, the default mode for most drivers is aggression.

[adinserter name="GOOGLE AD"]Newgarden’s position was also somewhat validated by both public opinion and his team owner. Fans, understandably, like aggression, bravado, and drivers who go for it. Furthermore, team owner Roger Penske was – publicly, at least – very diplomatic. “I think this shows just how good Josef is but Simon was driving a great race, too," said Penske, somewhat awkwardly negotiating the middle ground. “It was a little bit of everything. It was terrific. It sounds like the fans really liked it."

And yes, the fans did like it. However, to me, a follow up question should have been: “Mr. Penske, would you be telling us how much the fans liked it if both drivers wound up in the wall, and Scott Dixon was handed a victory?

Snark aside, this is in my opinion a more-than-fair question, because let’s be clear: Newgarden’s move not only put BOTH Team Penske cars at risk of being taken out, but had they been taken out, it would have almost certainly have handed Dixon the win. And it is when looking at matters from the perspective of the team that brings us to Pagenaud.

The reigning series champion was, of course, rather stinging in his post-race comments about Newgarden. Furthermore, there has been nothing publicly stated from the drivers or team in the past few days to suggest there has any thaw has occurred within team headquarters in Mooresville, NC.

Now, just because Pagenaud came out of the final pit stop with the lead does not mean his expectation should be for Newgarden to hold station behind him. Newgarden has a right to race a teammate or any other driver. Period.

Still, to dismiss the reigning champion’s view as sour grapes, as some have, would be a simplistic accounting of the facts.

“I think that if it wasn’t me, he would be in the fence with someone else," were the likable Frenchman’s very calm, yet piercing words in the post-race press conference. These were rather interesting comments, not the least of which is given Pagenaud’s accent it wasn’t totally clear what he was saying. My initial thought was that he said “next time he’ll be in the fence," or something to that effect.

But after listening to the quote again, the Frenchman didn’t say his teammate should be expecting a face full of concrete sometime soon. Rather, Pagenaud noted that if Newgarden was racing SOMEONE ELSE, he might not have received the courtesy he did from Pagenaud. Newgarden – in Pagenaud’s view – not only failed to respect that courtesy, but actually leveraged the courtesy afforded by Pagenaud against him. After all, one could argue, Newgarden put the Frenchman in a situation where he had to either yield or make a move that would have risked taking two team members contending for a championship out of the race, and handed victory to the team’s fiercest rival.

For his part, Newgarden was hearing none of it. The series championship leader noted that he, if anything, showed great courtesy by moving up the track as to not lose the car on the white line and take them both out. “Hopefully he knows next time it's getting a little tight in the corner, give me a little more room," said Newgarden, making no effort to douse the flames.

Ultimately, I would conclude that Newgarden was aggressive but by no means reckless. If it was Formula One, which is fundamentally a Constructors’ Championship, I might have a different view of Newgarden pulling such a move on a teammate. But in IndyCar, which is fundamentally a drivers’ championship, Newgarden has the right to race Pagenaud just as he does anyone else. And if there were any particulars about the rules of engagement, those would could from within Team Penske headquarters; and publicly at least, The Captain seems less concerned about the encounter than most everyone else.

Now, it may be true that Newgarden violated some sort of code, either stated or unstated, between drivers as Pagenaud suggested. But at the end of the day, I have no real way of knowing this. Going forward, Pagenaud can give Newgarden the cold shoulder, maybe not race him with the same courtesy, and hope that what goes around does ultimately come around. Otherwise, although I feel some sympathy for Pagenaud, he is ultimately SOL. Fair or unfair, Newgarden got him Saturday night; and got him good.

This will be an interesting dynamic to follow going forward. Presumably, Newgarden and Pagenaud are slated to be Team Penske teammates for years to come. Long-term, such similar dust-ups between teammates without resolution cannot be sustained. As for the short-term, the gloves are off for any encounters the two may have at Watkins Glen or Sonoma in determining the championship. And for Simon Pagenaud now knows the rules of engagement are much different than whatever he believed them to be prior to Saturday.

While Dixon remains very alive in the championship battle, the rest of Chip Ganassi Racing is struggling at the moment. In the last six races, Tony Kanaan, Max Chilton and Charlie Kimball, have a total of 12 finishes outside the top-10.

More recently, the team has come under scrutiny for apparently ‘parking’ Chilton at Pocono, and Kanaan at Gateway when both were running multiple laps down in the later stages of the race.

Now, the team was somewhat vague on the details of each instance. However, Chilton was very emphatic on the radio at Pocono asking the team why they would make such a move, and then took to Twitter later claiming that he wasn’t a quitter. The clear implication, which has no has gone out of their way to refute, was simple: the team quit, not me.

As for Kanaan, he was reportedly despondent after retiring Saturday and simply said, “ask Chip," when questioned by media.

As for Ganassi, he addressed the situation via Twitter. From @GanassiChip August 28:

“Spoke to @maxchilton and @TonyKanaan. The only time we pull cars off the track is when we have no chance at a better finishing position."

This is interesting because, for one, Ganassi did not directly address either situation, simply saying the team pulls cars off the track when there is no chance of bettering position. Also, assuming no issues with the car, had he continued running at the pace he was, Kanaan would have bettered his position Saturday, due to a Ryan Hunter-Reay accident. For the record, Kanaan was shown as retiring due to a “Mechanical" issue.

IndyCar provided no post-race quote from Kanaan this week, and did the same with Chilton the week before.

Now, in fairness to Ganassi, and keeping in mind the limitations of 140 characters or less, he very well could have meant if there was no reasonable chance at a better finishing position. After all, there could theoretically be a 5-car accident, resulting in Kanaan improving five positions; although such a scenario is at best, a long shot.

Now, personally, I have no real issue with a team retiring a car in situations in which there is very little hope of gaining positions. Furthermore, while can talk about never giving up and the sanctity of sport all they want, it’s not their money that is funding these cars., and there is a business reality to this sport. While that sentiment may appear to validate ‘quitting’ sometimes a simple recognition of the morbid reality of a situation makes such a decision reasonable.

What I think does need to improve in this case is the messaging as to what they did and why they did it. If you’re parking a car because the situation is bleak, and the chances of improving very small, then well, just say so. But right now, the absence of a clear message, only serves to embolden the voices of negativity, who are creating a less-than-flattering narrative.

On the flip side…

Because, I had no postscript that week, I never was able to mention the very good PR Chip Ganassi Racing put forth with Kyle Larson racing at Knoxville and Michigan the same weekend. Ganassi recorded a video saying that he would let Larson race at Knoxville then asking for fans to assist in Larson win at Knoxville. Larson would finish second at Knoxville before winning the NASCAR race Sunday.

A very simple request that fans be part of the journey will usually go a long way in endearing the public to a driver. It seemed to work in this instance as the roar for Larson winning at Michigan was huge.

Very well done both on track and off by team and driver.

I’ve met Charlie Kimball and find him to be very friendly. However, that was an EGREGIOUS block he put on Conor Daly Saturday. And if INDYCAR doesn’t call that blocking, well then, I don’t know what blocking is.

I’m not aware of the marketing and promotion techniques that went into the recent Gateway event, but kudos to whoever put together the strategy. IndyCar’s return to St. Louis was an unquestioned smashing success.

More than strong attendance, a good race and overall good vibe, for a series so desperately in need of viable oval events outside the Indianapolis 500, Gateway showed that an IndyCar oval race, if promoted and done right, can be a success.