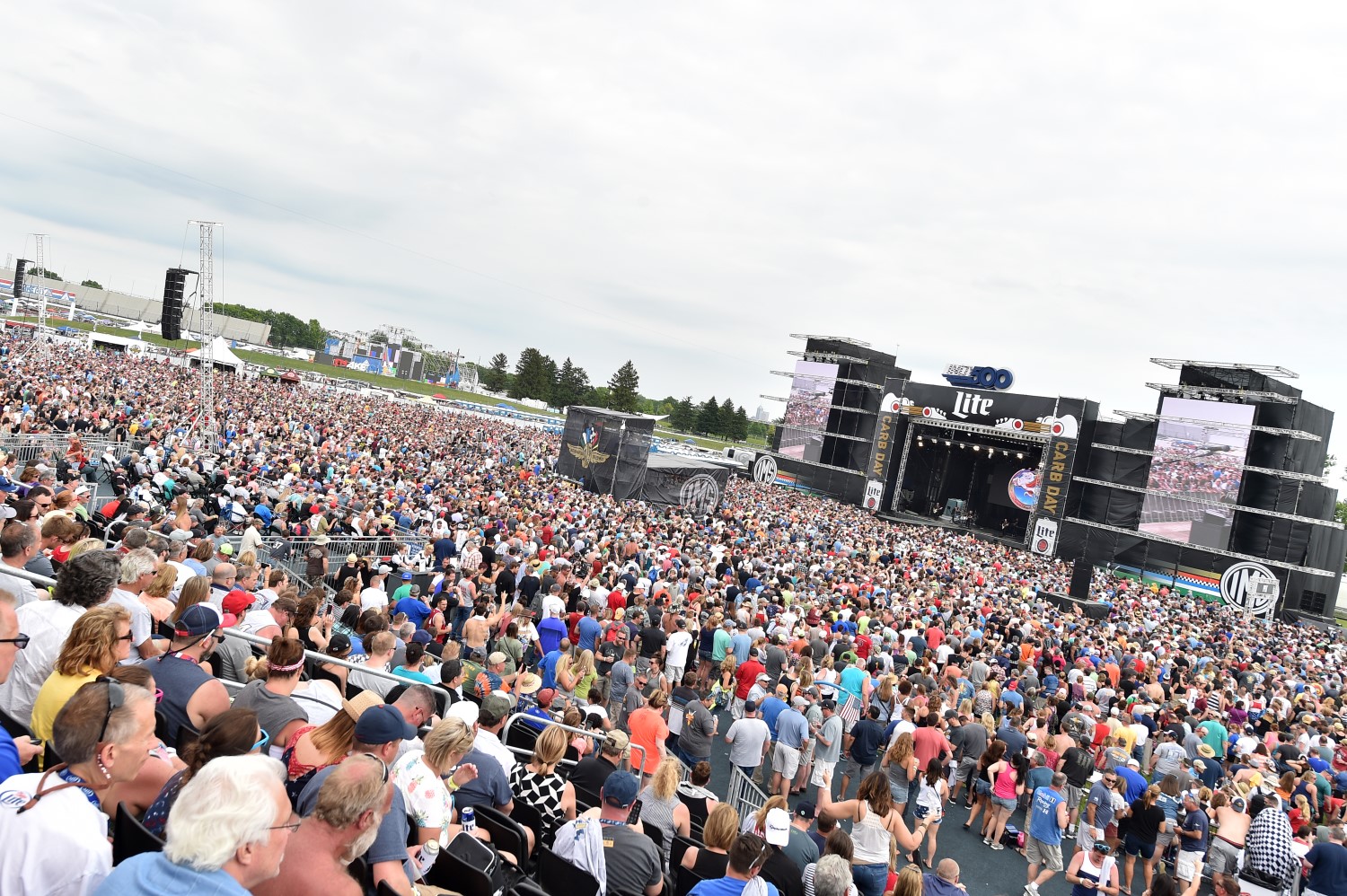 Superstar DJ and producer Martin Garrix will headline a stellar lineup of global electronic music artists at the Indy 500 Snake Pit presented by Coors Light on Sunday, May 24 at the Indianapolis Motor Speedway, the biggest and best party of Race Weekend.

Galantis, Rezz, Steve Aoki and Yellow Claw also will perform at the Race Day concert during the 104th Indianapolis 500 presented by Gainbridge. Performances begin at 7 a.m. in the infield adjacent to Turn 3 of the IMS oval, with specific set times to be announced.

"The Indy 500 Snake Pit presented by Coors Light is one of the most-anticipated concerts of the year on the global EDM calendar," IMS President J. Douglas Boles said. "In less than a decade, the Snake Pit has become a tremendous success for IMS and the Indy 500. This incredible, star-studded lineup will introduce a new, young generation of fans to 'The Greatest Spectacle in Racing' with free-spirited fun and magical memories."

General admission and VIP tickets for the Snake Pit are on sale for $30 and $125 at ims.com. VIP amenities will include access to a raised viewing platform located beside the stage, a private cash bar and private air-conditioned restrooms.

All Snake Pit ticketholders must be at least 18 years old and hold a valid Indy 500 general admission or reserved seat ticket. Ticket holders should be prepared to show proper identification to enter the concert.

Snake Pit concertgoers are encouraged to buy tickets now, as prices will increase in 2020.

Martin Garrix has risen to global stardom in pop as well as electronic circles -and yet he's far from being done. Dance music's freshest talent has headlined festivals around the globe, founded a label and mentored other artists and won the No. 1 spot in DJ Mag's Top 100 twice.

This will be Garrix's second performance in the Snake Pit, as he also was in the lineup for the landmark 100th Indianapolis 500 in 2016.

Garrix, from The Netherlands, taught himself to produce and play his songs by his mid-teens. In 2013, he released music on Musical Freedom – his idol Tiesto's label – and not long after, he released the track that would change everything for him.

"Animals," released in June 2013, was a breakout success and a game-changer for the music industry. Reaching No. 1 in the United Kingdom and many other countries, it proved that a hard-hitting, dancefloor-oriented track could reach pop status, ultimately reaching over a billion streams across several platforms. It also proved that Garrix, at only 17, had the talent to become a world-class musician.

The six years since have been marked by a quick march through the ranks of dance music, conquering stages all around the world and releasing more breakout hits, including "In The Name Of Love" with Bebe Rexha. In 2016, Garrix took pole position in the DJ Mag Top 100 for the first time and launched his label, STMPD RCRDS. Named after his father's profession, who runs a stamp auction house, the label serves as an outlet for Garrix's music and as a platform for up-and-coming, creative talents.

Garrix' musical achievements have not gone unnoticed. He was awarded with two MTV EMAs in 2016, holding the No. 1 spot in the 2017 DJ Mag Top 100, a "Man of Today" accolade from GQ, a spot among Forbes' "30 Under 30" and another at Billboard's "EDM Power Players." He also performed twice on "The Tonight Show Starring Jimmy Fallon" on NBC, the first Dutch guest in the show's history.

A naturally outgoing person and a born entertainer, Garrix also has headlined at some of the world's major music festivals, including Coachella, Tomorrowland, Lollapalooza and Ultra Music Festival. He also locked down residencies at two of the world's most prestigious clubs, UshuaÃ¯a Ibiza and Omnia Las Vegas, and also performed at the Closing Ceremonies of the 2018 Winter Olympics in South Korea.

Galantis is comprised of Swedish DJ's and producers Christian Karlsson and Linus Eklow, who have fused pop and EDM into global superstardom.

Karlsson, who wrote hits that include Britney Spears' "Toxic," met Eklow, who was behind hits such as Icona Pop's "I Love It," at a studio in Stockholm. They quickly began working together after finding mutual passion for a poignant style of electronic music with pop's passion. They released the single "Smile" in late 2013 and followed with the hit single "Runaway (U & I)" in 2014, which was nominated for a Grammy Award in 2016.

Their debut effort, "Pharmacy," was released in 2015. In 2016, the single "No Money" became Galantis' first song to debut on the Billboard Hot 100. After the release of more singles, the duo's sophomore release, "Aviary," arrived in September 2017 and charted on Billboard's Top 200.

The duo released more singles in 2018, including "Spaceship" featuring Uffie and "Satisfied" featuring MAX. Another single, "Holy Water," was released in September 2019. Their latest single is "Faith" with Dolly Parton featuring Mr. Probz.

Rezz is the stage name of Isabelle Rezazadeh, a Canadian DJ and producer from Niagara Falls, Ontario. She was born in Ukraine and moved to Canada as a child, falling in love with electronic music when she snuck into Toronto clubs in her teens.

She began her career as a self-taught DJ at age 16, evolving to create her own dark, minimalist productions that attracted the attention of superstars and past Snake Pit headliners Skrillex and Deadmau5. In 2015, she released her debut EP, "Insurrection," on Skrillex's Nest imprint before signing with Deadmau5's Mau5trap label, which released her single "Serenity."

Two more EP releases in 2016, "The Silence Is Deafening" and "Something Is Wrong," created great anticipation for her full-length debut, "Mass Manipulation," in August 2017. She followed in 2018 with another LP, "Certain Kind of Magic," that featured collaborations with Deathpact, Kotek and Fytch.

Steve Aoki is returning to the Snake Pit for the second time, as he also performed there in 2015.

Award-winning producer and DJ Aoki, a native of Miami who grew up in California, built a huge worldwide fan base around rousing live sets, high-profile remixes and collaborations and his label, Dim Mak Records.

Aoki turned his record production hobby into a profession in 1996 with the formation of Dim Mak Records. Since then, he has released compilation CD's and remixes of artists from many genres, such as Michael Jackson, Drake, Tiesto, Lenny Kravitz, The Killers, Franz Ferdinand, Bloc Party, Zuper Blahq, Rivers Cuomo of Weezer and more before the success of "Wonderland" in 2012.

Since then, Aoki has released EP and LP efforts and continued to break genre barriers with global smash collaborations with Linkin Park, Cardi B, Bebe Rexha, Snoop Dogg, Louis Tomlinson of One Direction, Migos, Lil Yachty, Gucci Mane, 2 Chainz, Charl XCX and Lady Antebellum. He performs at prominent clubs and festivals around the world.

Yellow Claw has climbed dance music charts since the Dutch DJ and production duo of Jim Aasgier and Nizzle debuted in 2010. The duo's debut in November 2015, "Blood For Mercy," debuted at No. 1 on Billboard's Heat Seekers Chart and Top Dance/Electronic Albums Chart and earned an Edison Award, the Dutch equivalent of a Grammy Award.

The duo has sold out shows in the United States, Asia and Europe and performed on major festival stages at the Electric Daisy Carnival, Tomorrowland, Lollapalooza, Coachella and more.

In 2017, Yellow Claw released its sophomore album, "Los Amsterdam." The album has amassed more than 200 million Spotify streams and peaked at No. 1 on the iTunes Dance Albums chart.

Tickets for the 104th Indianapolis 500 presented by Gainbridge on Sunday, May 24 and the INDYCAR Grand Prix on Saturday, May 9 are available at ims.com.