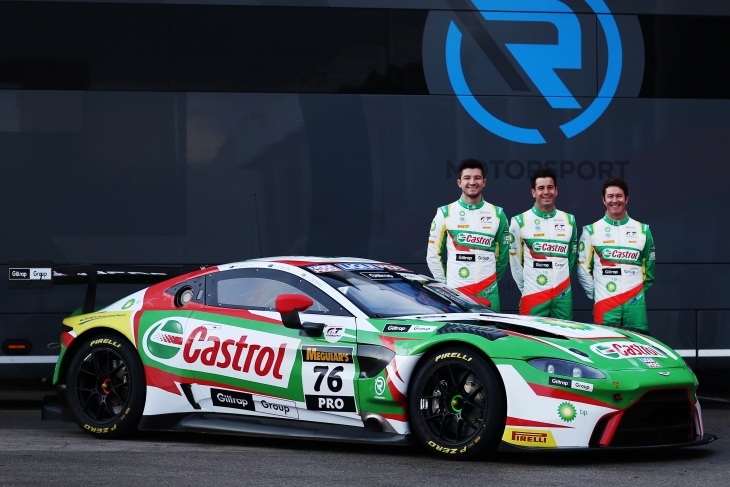 Râ€'Motorsport will field two Aston Martin Vantage GT3s in the 2020 Bathurst 12 Hours. The first of the team’s two line-ups features this year’s 12 Hour pole-winner Jake Dennis alongside Supercars star Rick Kelly and IndyCar stalwart Scott Dixon. The 2020 edition of the Liqui-Moly Bathurst 12 Hour will be staged across the January 31-February 2 weekend

The team has also revealed the livery for their car, the #62 will feature Castrol branding for the race, which opens the Intercontinental GT Challenge season.

“I have never raced at Bathurst before, but I’ve watched races at the Mount Panorama Circuit back when I was a teenager," Dixon, a former driver in Ford’s factory GTE/GTLM program said. “What I like most about the circuit is the high commitment, especially across the top, the high speed passages and then down the chase and all the way to the last corner. It’s much like a street course with the concrete walls and the very confined spots. You need an extremely good flow.

“I’ve done GT racing as such with the four Le Mans 24 hours races and other endurance events, but never GT3. I love doing the long distance races. It complements quite well with the IndyCar series at the moment to do Daytona 24h and Sebring 12h, but also Petit Le Mans, which was the first endurance race I did back in 1999.

“I know Rick Kelly from my years racing in Australia and I also teamed up with his brother to do the Gold Coast races back in 2010. Rick is a great guy. I haven’t had the opportunity to meet Jake Dennis yet, but I’m looking forward to meeting him. I’ve heard that he’s super fast and very good. My expectations for the 12 hours: with the caliber of the team and the drivers that I am joining we’ve got to go in with the mindset of we’re going to be successful.

“I know it’s always difficult with the Balance of Performance and how each car is categorized. I just hope I can get up to speed quick enough and be a good addition to what is going to be a very strong team. I’m really looking forward to it and it’s really nice to get back to Australia."

Rick Kelly, R-Motorsport’s second new entrant, is a veteran at the Mount Panorama circuit where he has already contested the 1000-kilometer Australian Supercars race 18 times, winning it twice and winning the Supercars title in 2006.

“I couldn’t be more excited to be heading back to the Bathurst 12H and to be joining the R-Motorsport Team in the Aston Martin. Since my last 12h campaign in 2016 I have been keeping a close eye on the event with a keen eye to returning," Kelly said.

“I have been working the R Motorsport Team in the background for several months now to piece this project together and they have been a real pleasure to work with, so I’m really looking forward to being a part of their team at the event.

“Getting the chance to visit Portugal and test the Aston is a real thrill, especially having the chance to share the car with Scott and Jake, two world class talents that will be a great asset to us as we piece together our attack on the mountain early next year. I had to pinch myself when I saw the Aston for the first time with all 3 of our names above the door."

Dennis, who stormed to pole and scored a podium at the event earlier this year with R-Motorsport, driving the previous generation of Vantage GT3, is excited to return to Mount Panorama with the Swiss team again in 2020.

“My favorite part of the track has to be the mountain section," he said. “The flow from corner to corner is just prefect, the walls being so close and the speed we take them is sensational. The first few laps you do at the start of the weekend are very daunting. But when you attack them for qualifying you have to put all that aside and just go for it. Skyline is probably the most challenging corner. The car becomes super light over the crest and if you overcook it on entry the rear wheels come off the ground it feels like. So getting the balance is very difficult."

“My memories from last year are mixed. The podium was good but I was super disappointed to loose out on the win with 10 mins to go. But if someone said to us at the start of the weekend that we would finish P2 with 3 rookies I would have taken it any day of the week. Having two experienced guys with me in the car is amazing and overwhelming. I can’t wait to start working with them and learn things off them. It’s a strong line up and I’m very excited to get things started there."

The driver pairing of the team’s second Vantage will be announced at a later date.