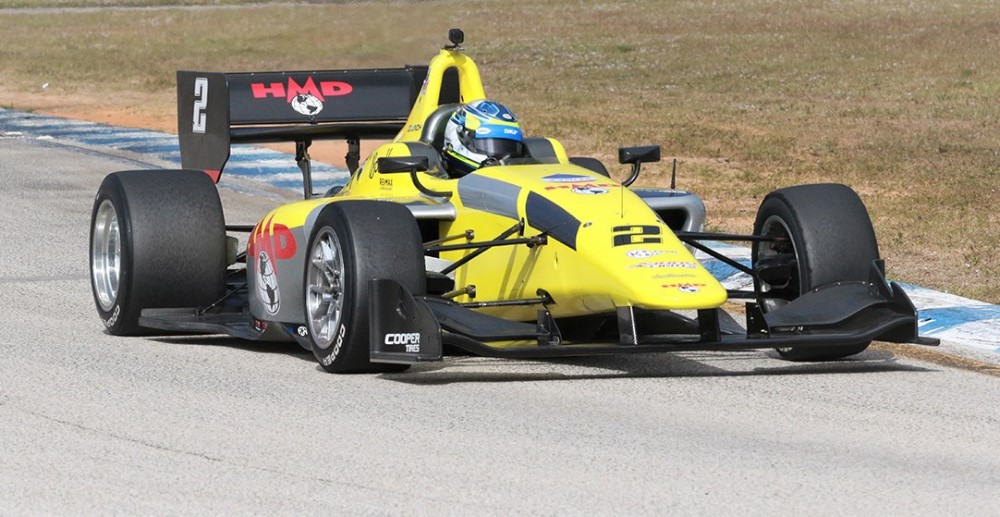 The past two days of open testing at Sebring International Raceway provided yet another reminder as to the ultra-competitive nature of Indy Lights Presented by Cooper Tires. Four different drivers took turns atop the charts during the opening four out of five sessions at the 1.8-mile, 11-turn road course before Rasmus Lindh, 18, from Gothenburg, Sweden, turned the fastest lap of all for HMD Motorsports during a late flurry of activity this afternoon.

Lindh, 18, who looks set to graduate to the top step on the Road to Indy Presented by Cooper Tires open-wheel ladder next season after finishing as runner-up in the Cooper Tires USF2000 Championship and the Indy Pro 2000 Championship Presented by Cooper Tires in each of the last two years – both times to Kyle Kirkwood – turned a best lap of 55.9580 seconds, an average speed of 107.438 mph, just a couple of minutes before the checkered flag flew for the final time.

“HMD is a new team (to me) in Indy Lights, so we wanted to see how they worked," said Lindh, who also tested an Indy Lights car with Andretti Autosport at Indianapolis in October. “The first day was all about getting used to how they did things, like the setup of the car and how we would work with the engineer. We put it all together this morning and were fastest straight away, and quickest at the end of the day. We have a very good feeling now. This is only my fourth day in the Indy Lights car so I feel I can improve – but everyone in the field feels that way, since we’re all rookies and most of the drivers are coming up from Indy Pro 2000. I feel as though I’m ready to move up to Indy Lights next year, though I need a little bit more time to get used to everything. The Road to Indy ladder is very good, the steps really prepare you as you move up."

Kirkwood, 21, from Jupiter, Fla., ended the test just a couple of tenths shy of Lindh, at 56.1736, following his first experience in an Indy Lights car with defending champion team Andretti Autosport. Kirkwood, who was fastest of all during the second of three sessions on Wednesday, edged teammate and Indy Lights veteran Robert Megennis, from New York, N.Y., by just over a tenth of a second.

“It was a learning experience," said Kirkwood. “It’s a much different car than the Tatuus, especially with the turbo, the much longer wheelbase and what feels like a very different tire compound. It seems as though you can drive the Dallara harder and find lap time that way. It’s more of a driver’s car.

“And this was my first time driving a real open-wheel car around Sebring. I live only 90 minutes away from here, but I haven’t driven here that much. It took me a session or two to get acclimated but now it comes naturally. Andretti clearly has a good baseline setup and we didn’t deviate much from that. We tried a few things so that I could get a feel for what changes did to the car. We were quickest all day even though the time wasn’t there in the last session, but we ran only one set of tires while HMD ran three. It was more about seat time for me, since this was my first time driving the car."

Danial Frost,18, from Singapore, ended the test with the fourth fastest time, 56.3800, aboard a third Andretti Autosport Dallara-AER IL-15, narrowly ahead of Frenchman Tristan Charpentier, also for Andretti Autosport.

Frost had been fastest of all on Day One at 56.8616 seconds, although the top five – Frost, Megennis, Los Angeles-based Russian Nikita Lastochkin, who made an impressive debut for the Exclusive Autosport team, Lindh and Kirkwood – were all blanketed by just 0.1572-second.

“The two days here at Sebring were very successful," said Frost. “On the first day we had the fastest time at the end of the day, and the second day was very positive as well. We have some places to improve to find those final tenths as this level of the Road to Indy is extremely competitive, but overall we’re very happy with the way the test went. Personally, I think I have significantly improved both physically and mentally since the Chris Griffis Test, and it shows in the results. It’s been a big jump since then."

A total of nine drivers completed 1356 incident-free laps, with the top eight all within one second of Lindh’s benchmark time.

“It’s nice to come back, have experience and know what I’m doing," said Megennis. “I have so much more confidence in myself and in the car, and a better understanding of what I need to do to go fast. You can maximize every lap you get. We tried some stuff with the car that we haven’t been able to try before, and we learned a lot. We treated this like a real test – I didn’t have to go out and figure out how to drive the car, we could work on things to use during the season to win more races.

“I’ve never done a second year in the same car before and now I’m able to really work on pinpointing every little mistake and get better. And [team manager] Don Lambert is awesome, as is the whole team. I’ve done a full year with them now and we can just work on improving everything. They understand what I need to go fast so it’s all working great."

In addition to Exclusive Autosport, Jay Howard Driver Development also turned its first “official" laps during a sanctioned Indy Lights test with Christian Bogle, from Covington, La., in preparation for an anticipated series debut in 2021.

The next official outing for the Indy Lights field will be the traditional Spring Training on March 9 at Homestead-Miami Speedway, just a few days before the much-anticipated season-opener on the streets of St. Petersburg on March 13-15 in support of the NTT IndyCar Series.