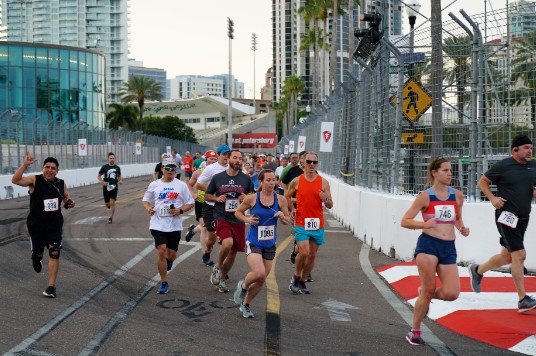 Runners and walkers have the unique opportunity to “race on track" during the Firestone Grand Prix of St. Petersburg weekend. The 8th Annual Modern Business Associates 5K Run is set for Friday, March 13, 2020, and online registration is now open at gpstpete5k.com.

Involved since 2014, Modern Business Associates, an HR outsourcing company based in St. Petersburg, Fla., is the key sponsor of this community health and wellness event run on portions of the 1.8-mile Firestone Grand Prix of St. Petersburg street circuit. For the fourth year, the Police Athletic League (PAL) of St. Petersburg will be the primary beneficiary from the 5K which will support its many programs serving local children and teenagers. New for 2020, American Stage, the Tampa Bay area’s longest-running, most critically-acclaimed professional theatre company, will also receive a donation from the event. PAL will be given an 80 percent share and American Stage 20 percent of the proceeds resulting from all 5K registrations.

“Modern Business Associates was founded in St. Petersburg in 1997. As one of the largest employers in Pinellas County, it’s our pleasure and responsibility to serve our community. We’re excited to sponsor the Firestone Grand Prix 5K for the seventh consecutive year," said Sean McConnell, CEO of MBA. “The 5K is much more than a fundraiser for the Police Athletic League; it’s a commitment to the welfare and growth of our community."

The 5K’s start/finish line is on Bay Shore Drive NE on the water side of North Straub Park just south of The Vinoy Renaissance St. Petersburg Resort and Golf Club. Entering and exiting the Firestone Grand Prix of St. Petersburg track’s layout at Turn 9 near Central Ave. and Pioneer Park, the course runs the same direction as the race cars onto the runways of Albert Whitted Airport and through Downtown St. Petersburg.

“The Police Athletic League of St. Petersburg is extremely grateful to our partners for their support and belief that all children, even the most at-risk living in our community, can grow to be healthy, productive adults," said Heather Robb, director, Police Athletic League of St. Petersburg. “Since 2016, contributions from the Firestone Grand Prix and proceeds from the Modern Business Associates 5K race have reached $190,000 enabling PAL to continue to provide enriching activities and eye-opening experiences to the hundreds of young people who come through our doors. We are excited for another great race weekend."

"This support is so meaningful to American Stage in empowering our mission to present world-class, professional live theatre and arts education programs, that connect and unite our community, produced right here in downtown St Pete," said Stephanie Gularte, American Stage CEO/Producing Artistic Director. “We are particularly grateful to our partners for helping to shine a spotlight on our world premiere production of ‘The People Downstairs’. It is an honor to be connected with the exciting St. Petersburg tradition of the Firestone Grand Prix."

"Our goal is to have over 1,000 runners and walkers enter the MBA 5K Run on the Firestone Grand Prix of St. Petersburg course. We really appreciate Modern Business Associates support in helping us elevate both the participation and profile of this 5K each year," said Kim Green, co-owner, chairman and CEO of Green Savoree Racing Promotions, organizers of the Firestone Grand Prix of St. Petersburg. “It is an awesome community event benefiting two great local organizations in PAL and American Stage, so sign up today and be a part of this memorable experience."

Registration is now open at gpstpete5k.com. An advance price of $30 is offered through Jan. 17, 2020, then the fee increases in $5 increments leading up to the event. On site registration the day of the race will be available for $45. Additional charitable donations are also accepted on the registration website to further the MBA 5K Run’s impact in supporting the missions of PAL and American Stage.