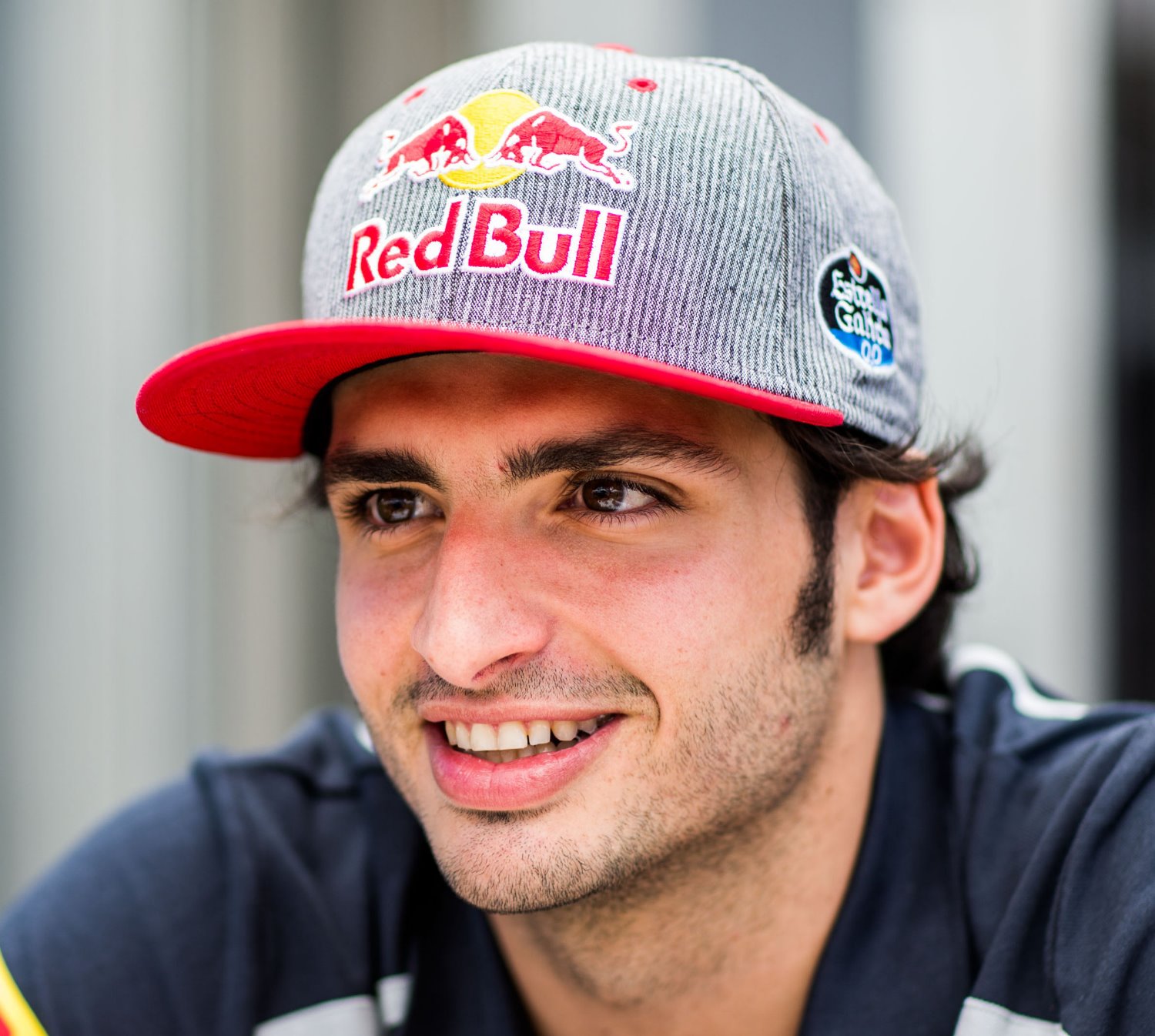 UPDATE This rumor is upgraded to 'fact' today. Renault have announced that Carlos Sainz Jr. will join them from Toro Rosso for 2018, though he will only be ‘on loan’ from Red Bull.

The 23-year-old Spaniard will partner Nico Hulkenberg in a revised line-up, bringing Jolyon Palmer’s two-season spell with the team to a close.

“Carlos Sainz is a very promising driver who has been on our radar for some time, especially after his successes in Renault junior formulae," said Cyril Abiteboul, Managing Director of Renault Sport Racing.

“It is positive news for us to be able to confirm Carlos for 2018. This choice is well aligned with our mid-term strategic plans. We feel that Nico and Carlos will complement each other on and off track and the combination should help us push forwards on the grid.

“I would like to thank [Red Bull motorsport consultant ] Helmut Marko for loaning Carlos to us for this period. We must thank Jolyon for his ongoing hard work with the team and his efforts over the past two seasons. He is a dedicated driver and we wish him the best in the next steps of his career."

Sainz, who has raced in 53 Grands Prix to date, scoring 100 points with a best finish of sixth place, expressed his delight with the move.

“I’m very happy to be joining Renault Sport Formula One Team," he said. “To be a Formula 1 driver for a manufacturer team is an honor and I hope to reward Renault’s faith in me with my very best performances on track.

“The trajectory of Renault Sport Formula One Team is exciting and I’m proud to join at such an important time in their history. I am looking forward to working with everyone at Enstone and Viry, and driving alongside Nico Hulkenberg.

“I have worked closely with Renault in Formula 1 and previously in motorsport, so I know their motivation and capabilities. This is the start of a very exciting new chapter in my career.

“I would like to say thank you to Red Bull for all their confidence and support and for allowing me to take this opportunity. Last but not least, I specially want to thank all the people that work in Toro Rosso. They are a fantastic team of professionals and I wish them the best for the future."

Red Bull's Marko said he wished Sainz the best of luck in his new role, and, with reigning GP2 champion Pierre Gasly waiting in the wings, hinted that the Spaniard’s move would open the door for another young driver at Toro Rosso.

“He is a tremendous talent and he will benefit from working with a manufacturer team alongside a highly experienced driver," said Marko of Sainz. "This will give Carlos a different challenge and we will be keenly watching his progress there as he remains part of the Red Bull family.

“This is very good development for both Carlos and Renault Sport Formula One Team and will also allow us to bring a new talent into Formula One."

Multiple sources are reporting that, in Singapore, the Spaniard will sign a contract to complete his switch from the junior Red Bull team to Renault.

He will reportedly replace the struggling Jolyon Palmer, with Red Bull rookie Pierre Gasly jetting in from his Super Formula duties in Japan to fill in for Sainz at Toro Rosso.

It appears to be the move that completes the complex divorce saga between McLaren and Honda, with the British team switching to Renault power for 2018 and Toro Rosso signing up with Honda.

However, Sainz Jr. is not confirming his impending move.

"Red Bull does its best for my career and so whatever they decide, I will accept it," he told Marca sports newspaper during a sponsor event at the weekend.

"It is difficult for me because what I say may please one person and displease another, so I prefer to say nothing.

"All I know is that there are many people in Toro Rosso that I want to think for making me the driver I am today," Sainz added.

Asked if a conclusion to the entire McLaren-Honda-Renault-Toro Rosso saga is now imminent, he answered: "I don't know.

"But I think for the sake of the teams involved, they are going to have to decide sooner rather than later, because (preparation for) 2018 is already here," Sainz told EFE nes agency.

09/09/17 Carlos Sainz Jr. has signed a deal to join Renault and trigger a series of domino changes that will secure McLaren the French car manufacturer's engines for 2018, Autosport reports.

While news of McLaren's progress in its efforts to switch from Honda engines has not been forthcoming in public, behind-the-scenes developments have been taking place that appear to show it has succeeded.

High level sources have confirmed that Sainz's deal has been agreed as part of a sweetener for Renault to end its Toro Rosso contract early.

With the Sainz deal arranged, that has opened the way for Toro Rosso to finalise a switch to Honda engines for next year, which in turn ensures McLaren will get hold of a supply of customer Renault power units for 2018.

After a frantic Italian Grand Prix weekend, where discussions to sort the McLaren-Honda situation were intense, it emerged that Sainz was becoming a key part of the equation.

Renault indicated that it was wanted some incentive to switch its customer supply from Toro Rosso to McLaren.

With Sainz, it has a promising youngster that to run alongside Nico Hulkenberg to help its efforts to move up the grid.

Our 2018 F1 Silly Season page has been updated

The energy drink company has a firm contract with the 22-year-old, but persistent rumors say Renault is interested in running him at the French works team.

Indeed, Sainz admitted recently that Renault even made a "good offer" to sign him for 2017, but it was turned down by Red Bull.

Now, there are rumors that not only Renault but also McLaren are interested in Sainz for 2018.

So when asked about Sainz's 100 per cent Red Bull contract for 2018, Dr Helmut Marko told Canal F1 Latin America: "It's difficult to talk about 100pc in formula one.

"I would not be surprised to see him at another team. Because I know what his contract is.

"But only we can make it possible," the Red Bull official added.

The impressive Spaniard has often been linked with a departure from Toro Rosso, but until now Red Bull has insisted he honor his contract until 2019.

But when asked about the 22-year-old, McLaren boss Eric Boullier said in Baku: "I know him and I like him.

"Everyone in this paddock is an option," he told Spain's AS newspaper.

Stoffel Vandoorne is under contract at McLaren for 2018, but speculation is rife that Fernando Alonso will depart.

Boullier admitted Sainz's existing contract could be an issue.

"You have to look at the contracts and if he is free, but I like Carlos and he's an option, yes," said the Frenchman.

"Saying that, we want to keep Fernando and we hope he continues with us, to be the champion we want, and we also believe in Stoffel," he added. "Those are our real options."

That is the claim of Josep Viaplana, the F1 correspondent for the Spanish sports daily Diario Sport.

"Sainz is among the drivers who have made the most progress in recent seasons, despite his modest Renault-powered Toro Rosso," he said.

Earlier, Spaniard Sainz, 22, had been linked with a move to Renault or Ferrari, but until now Red Bull has not been willing to relinquish his contract.

"Helmut Marko and Christian Horner have already decided that if Ricciardo and Verstappen stay at Red Bull Racing, they will open the door for Sainz to look at a better option."