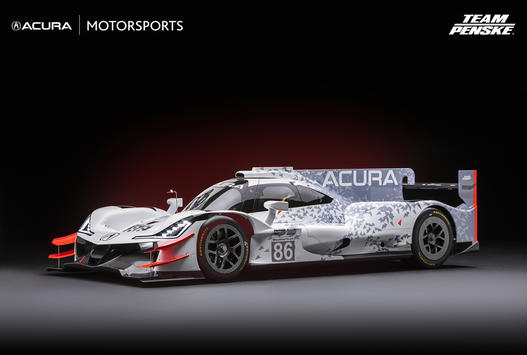 Acura’s new ARX-05 DPi car was officially unveiled today at The Quail, A Motorsports Gathering in Carmel, California as part of Monterey Car Week festivities. Two ARX-05s – which stands for Acura Racing eXperimental, generation 5 – will be fielded in the 2018 IMSA WeatherTech SportsCar Championship Prototype class by Team Penske, in a new partnership with Acura Motorsports.

“The Acura DPi is the latest example of an automotive manufacturer applying key design features and technology from its consumer vehicles into a world-class racing application," said IMSA President Scott Atherton, who was on hand for the unveiling. “Acura and Team Penske join a formidable WeatherTech Championship Prototype class that includes race-winning DPi programs from Cadillac and Nissan, a Mazda DPi team that should be highly competitive in 2018 through its new relationship with Joest Racing along with several highly professional and competitive LM P2 programs.

[adinserter name="GOOGLE AD"]“On behalf of the France family and everybody at IMSA, it is truly an honor to congratulate Acura and Team Penske on the unveiling of this striking new race car. We join race fans everywhere in great anticipation of seeing it on the racetrack soon."

The new DPi is based on the ORECA 07 LM P2 chassis, but showcases Acura-specific bodywork and design features including Acura’s Jewel Eye headlights. The car will be powered by a 3.5-liter, twin-turbo V6 engine based on the production V6 that powers Acura production vehicles such as the MDX, RDX, TLX and RLX.

“At Acura, Precision Crafted Performance is at the heart of everything we do," said Jon Ikeda, Acura vice president and general manager. “Whether it is our production cars or a prototype race car, if you want to be a performance brand, you need to perform."

Bodywork for the new DPi was developed by a team led by Acura Global Creative Director Dave Marek.

“We created a variety of initial sketches, then pared those down to a handful of potential designs," Marek said. “Next came aero and wind-tunnel model testing and time for the engineers to have their say. The design continued to be refined throughout the testing and evaluation process until we came up with a final treatment that met our performance goals, while maintaining Acura’s styling cues. It’s been an exciting process."

The car will be on display at the Rolex Monterey Motorsports Reunion at Mazda Raceway Laguna Seca on Saturday, Aug. 19 and will be featured on the Concept Lawn at the Pebble Beach Concours d’Elegance on Sunday, Aug. 20.

The team and car already have tested at France’s Circuit Paul Ricard and will continue a rigorous testing schedule throughout the next several months before its competition debut in the Rolex 24 At Daytona on Jan. 27-28, 2018.