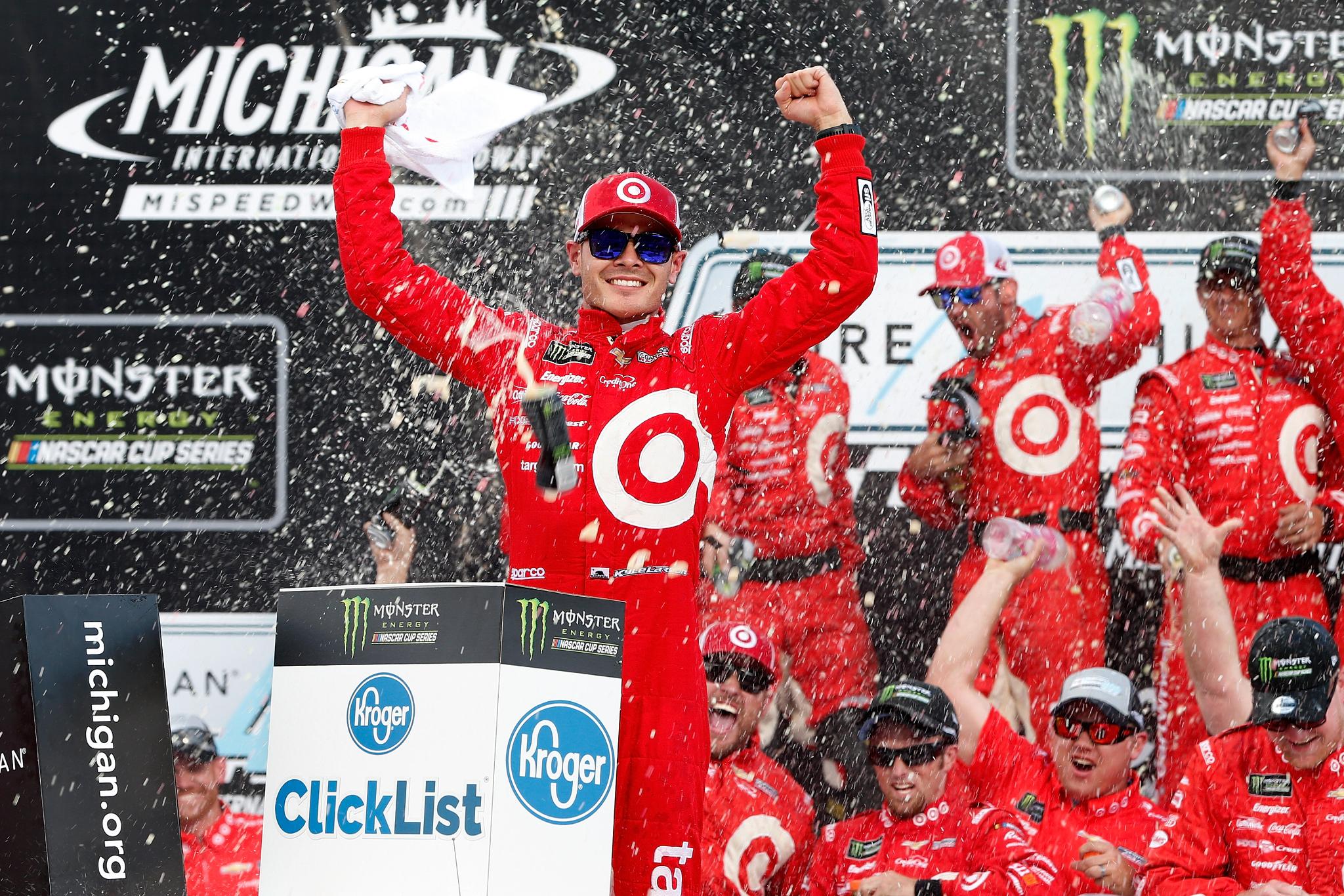 Kyle Larson made 2017 his own celebration at Michigan International Speedway. He once again used a late-lap pass to win the Monster Energy NASCAR Cup Series Pure Michigan 400.

Larson certainly knows the way to victory lane at Michigan International Speedway and has left his mark on the track with famous burnouts. The win marked the second straight Pure Michigan 400 victory for Larson and the third straight overall Monster Energy NASCAR Cup Series win at Michigan.

Larson joined some elite company with his third consecutive Monster Energy Series win at MIS. A pair of NASCAR Hall of Famers are the only other two drivers to accomplish the feat. Bill Elliott won four straight from 1985-86. David Pearson won three consecutive races at the two-mile oval from 1972-73.

Michael McDowell spun with three laps to go in the race and collected Paul Menard to bring out the red flag to clean up fluids on the track. After a brief stoppage in the action, the intensity hit a crescendo on the restart.

The red flag allowed each driver run through all the options. Larson’s team owner Chip Ganassi put the idea of going three wide into his driver’s thought process.

“I was running a few options through my head of what to do if I got a good jump, and that was one of them and it worked out perfect," Larson said. “I can’t believe that happened. We were struggling all day. We were definitely not as good as the last two times we won here, but we preserved and had a great restart at the end."

After the red flag it was time for NASCAR overtime and a two lap dash to the finish.

Martin Truex, Jr. lined up on the outside with teammate and Michigan native Erik Jones on inside. But it was Larson who lurked just behind in fourth place. Larson got the best restart of his career and quickly went three wide into turn one.

Coming out of turn two it was Larson in the lead and he held that position coming to the white flag. Truex made one more run at Larson, but Larson held off the challenge.

Jones finished in third place, his best finish in the cup series. He had a chance to collect his first win and knew it would be even more special at his hometown track.

“I did for a few moments and then the 78 (Truex Jr.) really kind of picked it up there the last 50 laps or so and he was really fast," Jones said. “We were kind of in our own league there for a long time – we were kind of matching lap times, he would go faster and I would go faster. I really thought that whoever was out front was going to win, unfortunately neither of us got it done. Neither of us really got going great after that last restart. I spun my tires, he spun his and it just wasn’t what we needed at the end."

Michigan native Brad Keselowski started on the pole and dominated the early part of the race. He won the first stage, leading 56 of the 60 laps in the stage.

“I was running a few options through my head of what to do if I got a good jump, and that was one of them and it worked out perfect. I can’t believe that happened. We were struggling all day. We were definitely not as good as the last two times we won here, but we preserved and had a great restart at the end.

WHAT DO YOU WANT TO SAY TO YOUR FANS RIGHT NOW?

“I want to thank Chip Ganassi, for one, for finding me in 2011 and bringing me up from USAC to race for him. I want to thank all my fans as well. This has been an incredible week for me. We ran second in Knoxville yesterday to Donny Schatz, and then to come here and win and beat Martin Truex, Jr., who is a Donny Schatz right now, is definitely a week I’ll never forget."

TAKE US THROUGH THAT RESTART WHEN YOU WERE BEHIND MARTIN TRUEX, JR. WHAT DID YOU DO TO GET UNDER HIM, CLEAR HIM AND KEEP HIM BEHIND YOU?
“Yeah, I wanted to get a good jump on him, get to his bumper and if I stayed locked at the start/finish line I was going to try and pull out like I did. It just worked out good. I didn’t have a car that was capable of winning throughout the race, but we had a restart there that allowed us to try and be perfect and we were. I’ve got to thank everybody on this Target team, Chip Ganassi for everything he has done for me, Target, Credit One Bank, everybody who has their names on this car and everybody back at the shop for everything they do."

WHAT DID YOU HAVE TO DO TO GET BACK UP TO FOURTH?
“Yeah, we were struggling actually the run before that final caution. We were stretching it and going to pit pretty soon, but we caught that caution at the right time and came down, got some tires, which I thought helped me a little bit, the tires did. But we finally got to line up on the outside lane the last two restarts. I had been on the bottom every time and I would lose spots. Lined up eighth, got to fourth and the obviously lined up there behind Martin and was able to just get a good jump."

WAS THIS A LITTLE BIT OF A THANK YOU FOR LETTING YOU GO TO KNOXVILLE?
“Yeah, for sure. You know Chip (Ganassi) is the best boss anybody could ask for. He knows that sprint car racing is very important to me and especially the Knoxville Nationals to let me go there last night and run. Wish I could have got a win there last night, but Donny Schatz is a pretty damn good driver."