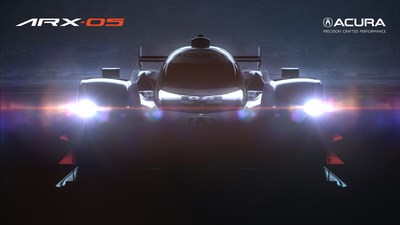 TORRANCE, Calif., Aug. 8, 2017 /PRNewswire/ — Acura teased its newest race car, the Acura ARX-05 prototype, to be fielded by the legendary Team Penske in 2018. Introduced in a new video (see below), the ARX-05 marks the Acura brand's anticipated return to prototype racing and will be revealed during the prestigious Monterey Automotive Week, beginning at The Quail, A Motorsports Gathering (August 18), followed by an appearance at the Rolex Monterey Motorsports Reunion (August 19) and concluding on the Pebble Beach Concours d'Elegance concept lawn (August 20).

Team Penske, will campaign a pair of entries in the IMSA WeatherTech SportsCar Championship next year. The Acura ARX-05 makes its competition debut at the Rolex 24 at Daytona in January 2018.

The Acura ARX-05 [Acura Racing eXperimental, generation 5] is the latest in a successful line of endurance prototypes fielded by the brand beginning more than 25 years ago (1991). The prototype race car was styled by the Acura Design Studio in Los Angeles, Calif. under the auspices of Dave Marek, Acura global creative director. The multi-year program will be administered by Honda Performance Development, the racing arm for both Acura Motorsports and Honda Racing in North America.