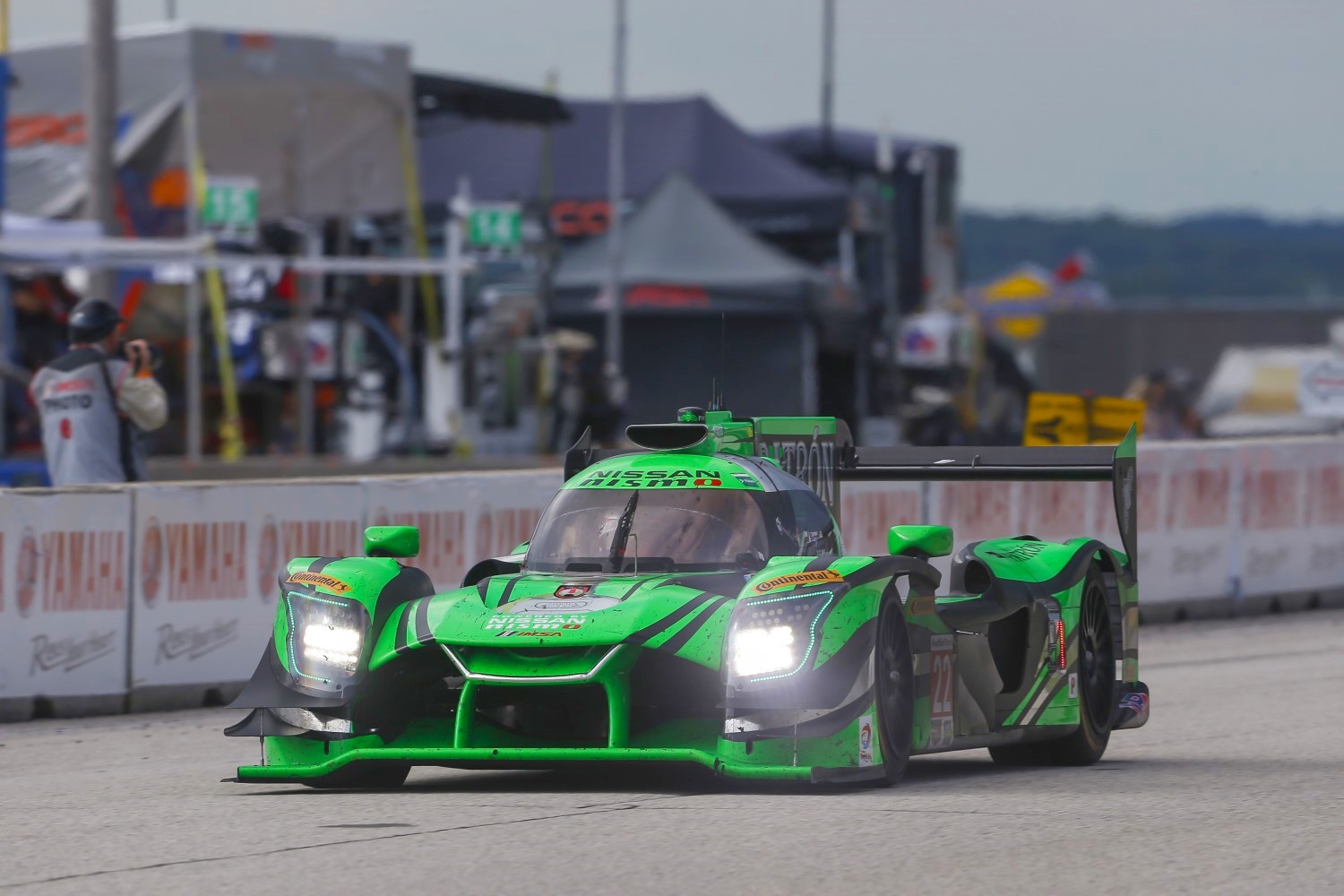 The Nissan DPi is a winner in IMSA WeatherTech SportsCar Championship competition.

However, with Simpson and the JDC-Miller team on a different fuel strategy than the rest of the Prototype class, Derani’s winning move actually came on a restart with just under 40 minutes remaining. At that time, Derani got a good run heading into Turn 1 and overpowered Jordan Taylor in the No. 10 machine to take over second place.

“I knew on the restart that it was my only chance to overtake the (No.) 10," Derani said. “They said it would be difficult because the track is high-downforce and you lose that when you get really close to a guy.

“I used the slipstream, though, to pass him. Outside on Turn 1 was the only place to go. I knew he’d play it safe because they are going for the championship. I’m glad it worked out, because the team was working so hard. This win means a lot to me."

The Taylor brothers wound up second for their sixth podium result of the season and first since winning five consecutive races to open the season. Ricky Taylor started from the pole position and combined with his younger brother to lead the first hour and 45 minutes before the final round of pit stops.

“Ricky had a strong stint to begin with," said Jordan Taylor. “We knew we had a good car and could control from the front, but with the changes coming over the year, the restarts would be our downfall coming down to Turn 1.

“I didn’t want to take a ton of risk for it. There was no point in taking the risk, those extra three points or seven on other cars. It was good to get in a rhythm after Watkins Glen and Mosport. So we’ll take the points and head on to [the next race at Mazda Raceway] Laguna [Seca, in September]."

Tequila Patron ESM finished with two Nissan DPis on the podium, as co-drivers Ryan Dalziel and Scott Sharp finished third in the No. 2 machine. Dane Cameron and Eric Curran – who won both of the past two WeatherTech Championship races at Road America – finished fourth in the No. 31 Whelen Engineering Cadillac DPi-V.R, with Renger van der Zande and Marc Goossens fifth in the No. 90 VISIT FLORIDA Racing Ligier LM P2 prototype.

Simpson made an emergency pit stop for fuel during the final full-course caution of the race to lose the lead then dropped further back when he had to stop again once the green flag dropped, leaving him and co-driver Misha Goikhberg eighth in the final race results in the No. 85 machine. They finished second in each of the last two races.

The next race for the WeatherTech Championship Prototype class is the Continental Tire Monterey Grand Prix at Mazda Raceway Laguna Seca in Monterey, California on Sunday, Sept. 24.

James French and Patricio “Pato" O’Ward maintained their perfect record in the 2017 WeatherTech Championship Prototype Challenge (PC) class with their seventh victory of the season in the Continental Tire Road Race Showcase, but this one meant a little bit more to French.

The driver hails from nearby Sheboygan, Wisconsin and made his sixth PC start at Road America. It wasn’t until today, however, that French stood atop the podium as a race winner. French and O’Ward made it look relatively easy on Sunday, as they combined to lead every lap in the race en route to the win.

“It feels pretty excellent to be honest," French said. “This is my sixth time in this car here and no victories up to this point. Now it’s great to finally check it off the bucket. Pato did a great stint under the green. We got caught off guard by the yellow, but were able to stay out front.

“The team did a good job of keeping us calm and keeping the car on the right track. It was overall a great day. The car was so fast, and we kept improving over the day. At the end, we got a win on the list and now we get to go on to Petit [Le Mans, the season finale]."

The PC class wraps up its WeatherTech Championship run in its next race, the 10-hour Motul Petit Le Mans at Road Atlanta in Braselton, Georgia on Saturday, Oct. 7.

Joey Hand passed the Porsche of Laurens Vanthoor on a restart with 31 minutes remaining to win in the No. 66 Ford Chip Ganassi Racing Ford GT started by co-driver Dirk Mueller. That victory coupled with troubles from the top two teams in the GTLM standings moved the No. 66 Ford GT team to within five points of the class-leading No. 3 Corvette Racing C7.R duo of Antonio Garcia and Jan Magnussen.

“We had some bad luck [earlier this season], but moving forward hopefully we can carry this momentum to a championship," said Hand. “GTLM is a tough, tough category, lots of good guys and lots of good teams. You don’t want to get in the mix, which is what happened in the beginning. I got into my teammate and the (No.) 911 and got out a little in the grass, but I was able to use the restart to get around them. The traffic made it interesting there at the end, but this was a good one for us."

The top three teams, from three different manufacturers, are separated by a mere six points in the GTLM class standings. Running in the top five for much of the two hour, 40-minute race, the points-leading No. 3 Corvette of Garcia was issued a drive-through penalty late in the race and finished sixth.

Looking to capitalize on the misfortunes of its championship rival, the No. 25 BMW Team RLL BMW M6 GTLM of Bill Auberlen and Alexander Sims was in position to make up precious points on the Corvette, but Sims was involved in a last-lap incident battling the No. 4 Corvette C7.R of Tommy Milner and limped home with a fifth-place finish.

Heading into the Michelin GT Challenge at VIRginia International Raceway on Aug. 27, the No. 3 Corvette team unofficially leads the standings with 236 points, followed closely by the No. 66 Ford GT (231 points) and No. 25 BMW M6 GTLM (230 points).

The No. 912 Porsche 911 RSR of Vanthoor and co-driver Gianmaria Bruni finished second, 0.621 seconds back, for the team’s second consecutive runner-up finish. The No. 67 Ford Chip Ganassi Ford GT of Ryan Briscoe and Richard Westbrook finished third and also remains in championship contention, 11 points out of the class lead.

What started has a weekend with limited expectations for Turner Motorsport at Road America ended with a dominating victory in the Continental Tire Road Race Showcase.

Jens Klingmann and Jesse Krohn teamed for an impressive first victory of the season in the team’s No. 96 BMW M6 GT3, leading 65 of 67 laps. It was Turner Motorsport’s 16th win in IMSA competition, but first since Circuit of The Americas in September, 2016.

“Last year we finished P7, so I wasn’t optimistic because the cars are the same," admitted Klingmann. “But when we practiced we realized we were competitive. Then Jesse was leading the race, and we had a big lead on P2. Sometimes it plays out your way and other days it doesn’t. Sometimes you have to get lucky and today we did."

The win was Klingmann’s third in IMSA competition, but it was the first for Krohn who has made six starts for Turner Motorsport over two seasons. His previous best finish was fifth in the 2016 Rolex 24 At Daytona.

“I’ve been waiting for this win to happen," said Krohn. “We’ve had a great car all year. Every time I race with Turner [Motorsport] I know I’ll have a car capable of winning the race. I knew if I waited I’d be able to make it up here soon enough."

Patrick Lindsey and Joerg Bergmeister followed up their victory at Lime Rock Park one race ago with a runner-up effort in the No. 73 Park Place Motorsports Porsche 911 GT3 R. Another team on a hot streak rounded out the podium with Lawson Aschenbach and Andrew Davis finishing third in the No. 57 Stevenson Motorsports Audi R8 LMS GT3. The Stevenson duo won two races ago at Canadian Tire Motorsport Park and finished fourth at Lime Rock.

The points-leading No. 63 Scuderia Corsa Ferrari 488 GT3 of Alessandro Balzan and Christina Nielsen finished fifth and holds a 15-point lead over Ben Keating and Jeroen Bleekemolen in the No. 33 Riley Motorsports – Team AMG Mercedes-AMG GT3 with three races remaining.