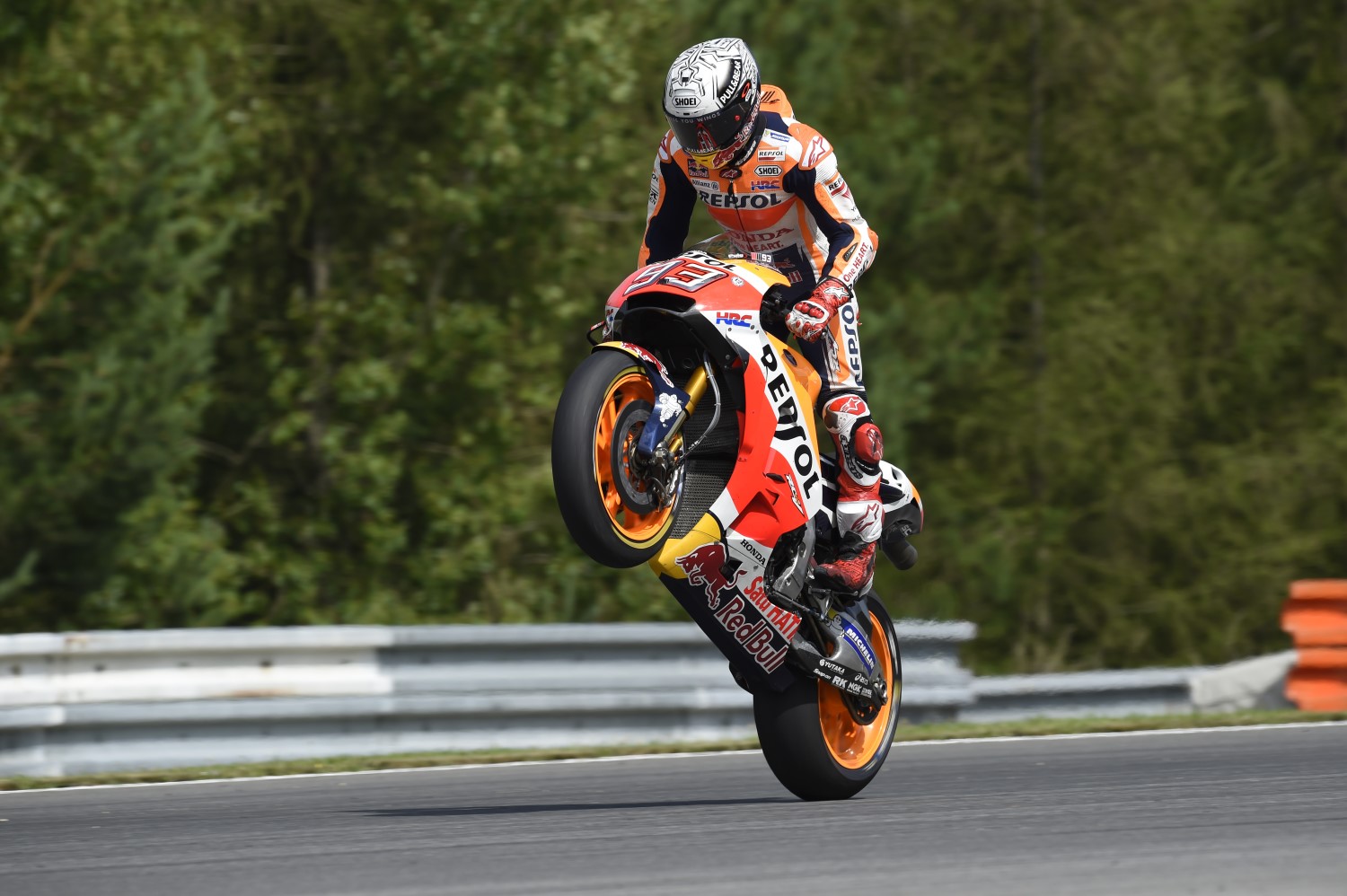 Marc Marquez dominated the Czech Republic MotoGP at a drying Brno, after a clever switch to the soft wet rear and then an early pit stop for slicks that put the world championship leader into a 20-second lead.

Marquez came in at the end of the second lap for a change of bikes with soft dry tires and set a sequence of blistering times to gain globs of time before his rivals also stopped for slicks.

Yamaha riders Maverick Vinales and Valentino Rossi lost out by delaying their stops for slick tires and dropped through the field, but recovered to place third and fourth, the Italian passing Cal Crutchlow late on.

Pre-race rain left the circuit damp prior to the start and the entire field started on wet rubber, with Jorge Lorenzo surging from sixth to take the lead halfway around the opening lap.

Marquez held second, but on the next lap plummeted down to 10th, having been the only rider to start with the softer Wet rear tire, and dived into the pits for slicks, as the track quickly dried.

Marquez's call proved to be correct as he lit up the timing screens, but next time around only Scott Redding and Aleix Espargaro came in, also making massive gains on dry rubber.

[adinserter name="GOOGLE AD"]The bulk of the pack came in on lap four, but Lorenzo — whose initial 1.7s lead had been wiped out by Rossi — lost substantial time when Ducati was not ready for a bike change.

However, new race leader Rossi bafflingly stayed out, in spite of Marquez setting a lap time nine seconds quicker than the Yamaha rider.

Rossi came in next time around but the extra laps on wet rubber had proved critical, and he emerged from the pit lane down in 13th position.

Once everyone had stopped, Marquez held a 20-second advantage over Redding and Espargaro, though the Pramac and Aprilia riders were quickly overhauled by Pedrosa.

Pedrosa was unable to close down Marquez's 20-second lead, though the elder Spaniard rider built a comfortable buffer to the chasing pack.

The shaken-up order left Redding and Espargaro scrapping for third, though both were overhauled by Danilo Petrucci and Cal Crutchlow.

However, Petrucci and Crutchlow were in turn usurped by Vinales, who dropped to the lower reaches of the top 10 during the pit stop phase before carving his way past slower rivals.

Vinales, in free air, was able to record quick pace, but Pedrosa had built a six-second gap back to his compatriot, meaning the positions remained unchanged.

Rossi remained a few seconds behind Vinales for much of the race and made similar progress to his younger team-mate, completing his recovery with a last-lap move on Crutchlow.

Andrea Dovizioso remained firmly in title contention by taking sixth, ahead of Petrucci, while Aprilia's Espargaro came home eighth, having been penalized for a bizarre pit lane incident.

Espargaro was released into the path of Andrea Iannone during his bike swap and the Suzuki rider took to the floor in order to avoid the Aprilia racer.

Espargaro was deemed culpable and had to cede three positions on track, though still came home a spot ahead of brother Pol Espargaro, who bagged a fine result for KTM.

Jonas Folger attempted to pit on the same lap as Marquez but his Tech 3 team was not ready, and the German had to ride through the pit lane before stopping next time around; he came home in 10th place.

Suzuki's Alex Rins was 11th, in front of Johann Zarco, who stayed out longest on wet tires before finally stopping for slicks.

Karel Abraham ran strongly after pitting early but slipped down the order to 13th, ahead of Jack Miller and former leader Lorenzo, his prospects ruined due to his desperately tardy pit stop.

Redding was unable to grab a point despite running in the podium positions, tumbling to 16th, ahead of Tito Rabat, Sam Lowes and the delayed Iannone.

Loris Baz and Alvaro Bautista suffered separate crashes, the Avintia rider falling at Turn 7 and the Aspar racer hitting the deck while chasing Lorenzo through Turn 10.

This was a very special Sunday because everyone was racing for Angel Nieto, but it was also a very challenging race. On the grid, I took the risk to use the soft rear tire because I thought it would give me extra grip for five laps before pitting to change bikes, but it didn't go like that. I soon started to struggle a lot and lost many positions. When I saw that, I decided to immediately get in and take the risk of the slicks. When I re-joined the race, honestly it was still too damp in some parts and I nearly crashed during the first lap out. When you go out for the flag-to-flag, it's so difficult to get the feeling with the bike again, but I tried to quickly understand the grip. Honestly, today I took some risks but it was one of those days when you just have to do it. After pulling a great gap, I just tried to manage, to ride well, and to finish the race. I'm really very happy with the result. It's a track I normally struggle at, one I worry about every year, and getting 25 points was very important. Thanks to the team for another great job! We did the correct strategy during the summer break, coming here to test, and we arrived here prepared. We're improving step by step. The Championship is still very, very tight; we must be able to be fast in every condition.

Dani Pedrosa #26 2nd
This weekend we were competitive in all situations, yesterday in qualifying and today, with this podium. I'm really very happy with the performances and with how I felt on the bike. I'm generally feeling stronger than in the first part of the season. We must improve some details–today it was knowing the right lap to stop on, but we'll learn from it. Normally, when it's still a bit wet and you have to switch to slicks you must be super focused and super committed. This is usually a strong point for Marc, as he's always very good in these conditions; we have to be able to keep the same concentration in the future because these details are very important. Anyway, thanks to the team and to Michelin for the amazing feeling I had on the bike. We lost five points to Marc on top but we recovered some on our other rivals. I think the strategy of the team to come test during the summer break was right, as it was good to have the bike setting, especially at this track. We also improved on some little details of the bike and now I feel more comfortable going into the second part of the season. Now we have to not focus too much on the Championship and just concentrate and perform well at every race.