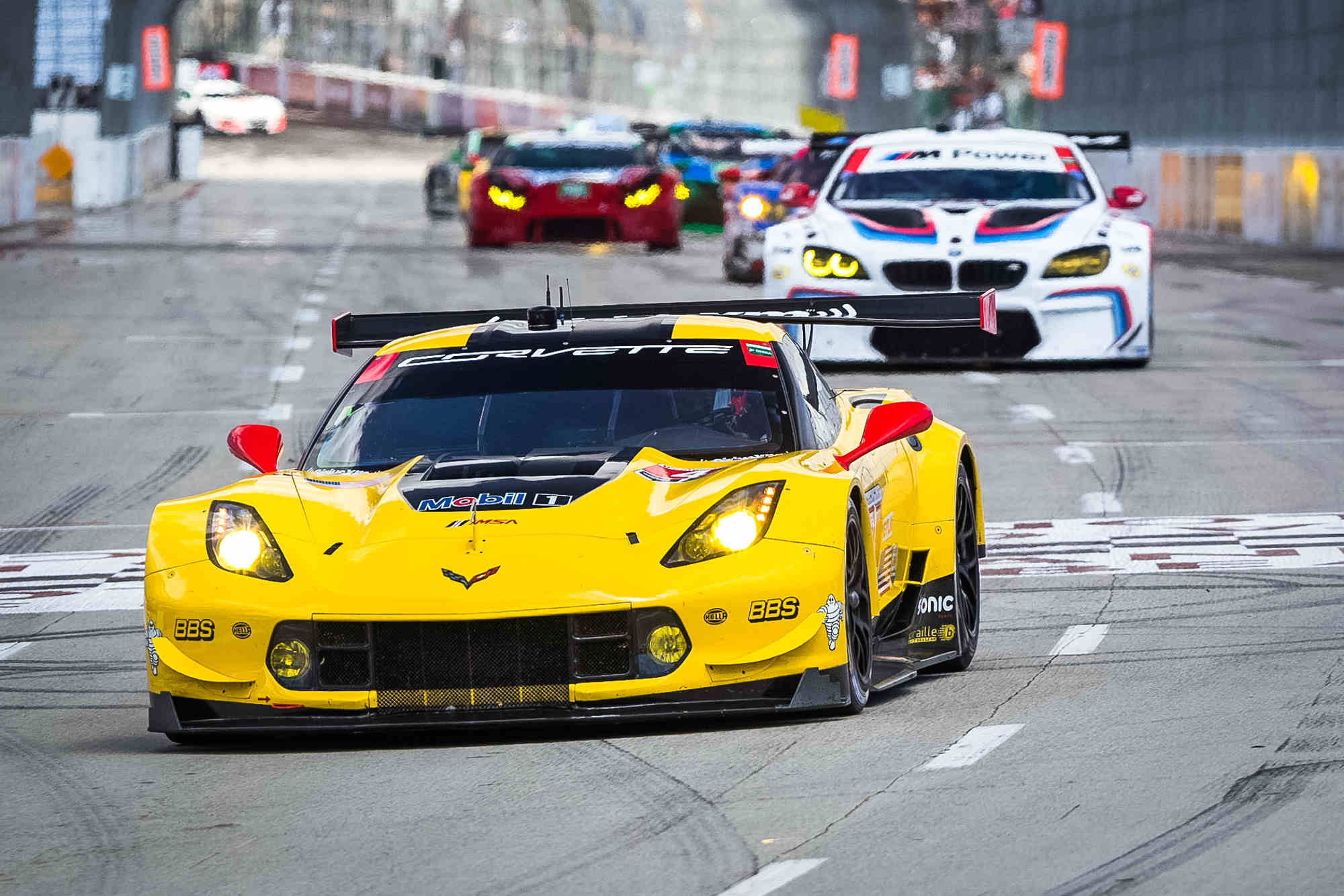 DAYTONA BEACH, Fla. – Although it took the remainder of the season to play all the way out, the 2016 Continental Tire Road Race Showcase at Road America proved to be a turning point in the IMSA WeatherTech SportsCar Championship GT Le Mans (GTLM) battle for the championship.

The No. 4 Corvette Racing Chevrolet Corvette C7.R duo of Tommy Milner and Oliver Gavin opened the year strong with victories in both the Rolex 24 At Daytona and Mobil 1 Twelve Hours of Sebring, and headed to Road America riding the momentum of earning the 100th victory in the team’s storied history two weeks earlier at Lime Rock Park.

As the laps wound down at Road America, however, it appeared fifth place might be the best the No. 4 team could achieve that day. Meanwhile, the No. 67 Ford Chip Ganassi Racing Ford GT pairing of Richard Westbrook and Ryan Briscoe were leading the race – Westbrook having taken the lead from Jan Magnussen in the No. 3 Corvette at the two-hour mark.

Westbrook and Briscoe had gained significant momentum with a run of three consecutive victories beginning from May’s race at Mazda Raceway Laguna Seca through early July at Canadian Tire Motorsport Park, and a fourth win would enable them to leave Wisconsin with the GTLM points lead.

Everything changed when the full-course caution was displayed with 13 minutes remaining in the two-hour, 40-minute race. Suddenly the field was bunched up behind the pace car, giving new life especially to Milner in the No. 4 machine.

[adinserter name="GOOGLE AD"]Nevertheless, when the green flag dropped with six minutes to go, Milner still had to get around three other GTLM cars before he could even consider challenging Westbrook. That’s exactly what he did, and on the final lap he found his way past the No. 67 machine, going on to win by 0.730 seconds and solidify a points lead that the No. 4 team would not relinquish for the remainder of the season.

"I still shake my head and laugh about that," Milner recalls. "It was such a feel-good moment, for sure. We weren’t quick all weekend and in the race we were really bad to start. We made a couple of changes and all of a sudden the car came alive. During that last caution, we were thinking, ‘Man, what a missed opportunity. The car is now really good and I wish we were a little closer.’

"Then we got that opportunity, but not having been around many of our competitors, we didn’t know how good of a car we had. All of the cards fell in my favor… like hitting the jackpot three times in three laps. It’s a cool story to tell and fun to think back to a moment where it all went right for us."

The GTLM championship battle takes center stage again this Sunday in the Continental Tire Road Race Showcase, which will be televised live on FS1 beginning at 2:30 p.m. ET, with live IMSA Radio also available on IMSA.com, RadioLeMans.com and SiriusXM Radio.

This year, there’s another Corvette atop the GTLM standings heading to Road America, the No. 3 C7.R shared by Magnussen and Antonio Garcia. That duo has a seven-point advantage over No. 25 BMW Team RLL BMW M6 GTLM teammates Bill Auberlen and Alexander Sims, with both Ford GTs still very much in the fight with Joey Hand and Dirk Mueller in the No. 66 Ford GT just 15 points out of the lead and the No. 67 duo of Westbrook and Briscoe one point behind their teammates.

For his part, Garcia has won a lot of races over the years, including a pair this season with Magnussen in the Mobil 1 Twelve Hours of Sebring Fueled by Fresh From Florida and the Advance Auto Parts Sportscar Showdown at Circuit of The Americas. However, he’s never won before at Road America.

"I drove there for the first time in 2010 or 2011 for a Le Mans test," said Garcia of Road America. "I found it super hard to get up to speed. It’s a very long lap with many corners. Even after three laps, I felt I was going along pretty well and close to the limit but was still four or five seconds off the pace. That shows you how difficult the track is, but once you get it, it’s great fun.

"It’s one of the best tracks we go to all year. We are in a rhythm of great race tracks in the U.S., and certainly Road America is one of those. I’ve been close to winning there many times and very much want to win there."

BMW Team RLL is carrying plenty of momentum, with three consecutive team podium finishes – including wins by Sims and Auberlen in the No. 25 entry at the Sahlen’s Six Hours of The Glen and the Mobil 1 SportsCar Grand Prix at Canadian Tire Motorsport Park – and could use more of the same this weekend to keep the championship pressure on.

"We’ve had a great run over the last four races, with three podiums, including two wins and that has Alexander and me second in points," Auberlen said. "With its long, sweeping corners Road America really suits the M6 and I know we can count on continuing our championship fight."

The same can be said for the two-car Ford GT team, which has fairly recent testing experience under its belt at Road America just prior to June’s 24 Hours of Le Mans. Team manager Mike O’Gara is expecting a strong performance.

"We tested there in the spring on our Le Mans tire, so it’ll be different going back now, but the drivers are familiar and comfortable with the layout of the track," O’Gara said. "It’s a fast track, a place where this car can really stretch its legs. That’s why we really like it. The car likes the low aero-drag configuration we try to run there. We’re looking forward to going back."

And perhaps the team carrying the most momentum to Road America is the Porsche GT Team, which went 1-2 the last time out in the Northeast Grand Prix at Lime Rock Park two weeks ago. No. 911 Porsche 911 RSR co-drivers Dirk Werner and Patrick Pilet claimed the Lime Rock victory and are within 17 points of the lead.

"Road America is a racetrack with loads of character and a long tradition," Pilet said. "A great challenge. It’s fast and demanding, and the way it follows the contours of the surrounding hills reminds me a little of Spa. Of course, at Road America I always think of 2015 when we had a fantastic race there. We started from the very back of the field and went on to win. You don’t forget such things. But Road America was my all-time favorite racetrack in America long before this sensational victory."

That sensational victory also helped to propel Pilet to the WeatherTech Championship GTLM title in 2015. So, who will win this Sunday at Road America, and will it be the catalyst for a championship as it has been the past couple of years?

It will take two hours and 40 minutes to find out.