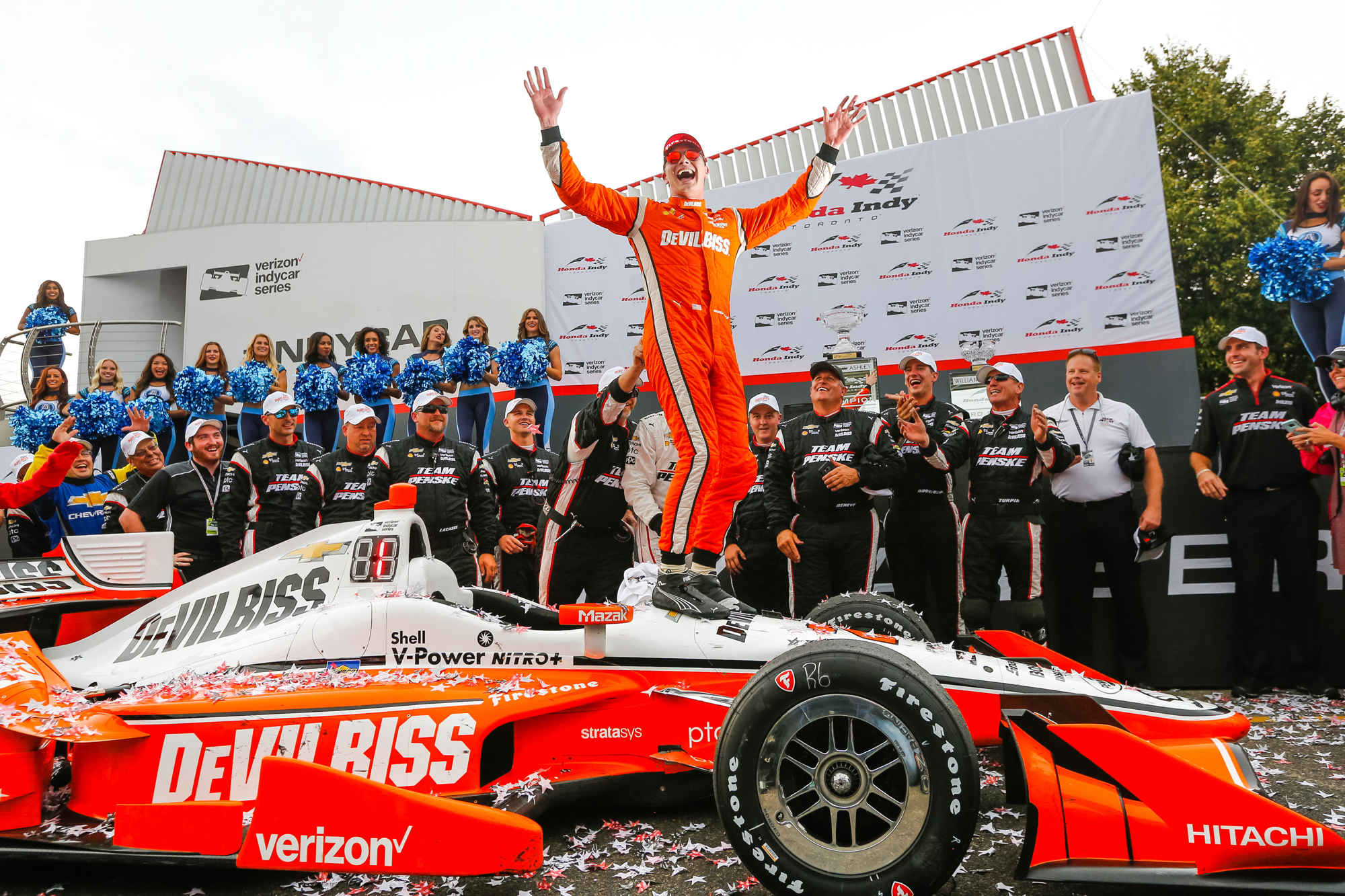 Whenever watching a motor race, I almost always keep a notepad handy. And the item at the top of the page earmarked for this weekend's Honda Indy Toronto was a simple "It’s Helio's World." This I imagine was transcribed the moment Helio Castroneves pulled off a breathtaking pass from the third starting spot on teammate and pole sitter Simon Pagenaud at the drop of the green flag.

Yes, on the heels of his impressive win at Iowa, the three-time Indianapolis 500 winner found himself once again at the head of the queue early in the race at Toronto with seemingly clear skies and favorable winds ahead. And as we occasionally say in the business: "sometimes, the stories just write themselves."

Of course, sometimes they don't. And another feel good chapter in this not yet officially confirmed farewell tour for the friendly Brazilian was not to be.

Nor was a potentially epic battle for the win between the three drivers who had clearly established themselves as the class of the field: Castroneves, Pagenaud and second-place starter Graham Rahal.

Ultimately, it would be Castroneves' teammate Josef Newgarden who would lead Alexander Rossi and James Hinchcliffe to the checkered flag, in what by any measure was an anticlimactic venture to the Great White North for the Verizon IndyCar Series.

How Newgarden wound up in victory lane; why Castroneves and others found themselves on the outside looking in, and what Rahal (amongst others I imagine) was so upset about following Sunday's race, that is ultimately the story of the 2017 Honda Indy Toronto.

[adinserter name="GOOGLE AD"]Saturday, Newgarden qualified a somewhat disappointing seventh. While it clearly did not eliminate the Tennessee native from contending for the win, Team Penske had to that point established themselves in practice as head and shoulders above the rest of the field. Newgarden would miss the Firestone Fast Six after posting a time more than six-tenths of a second slower than Pagenaud.

Nonetheless, by getting around sixth-place starter James Hinchcliffe on the first lap and taking advantage of the contact between Will Power and Scott Dixon, the Hendersonville, TN native found himself fourth after the opening lap. He would stay there until coming into the pits on lap 23. As the No. 2 Devilbiss Chevrolet came to pit road, a yellow flag would come out for Tony Kanaan, who was in the tire barrier at turn 1.

It was more than a little good fortune for Newgarden who had come to pit road, as the leaders were just past pit in and just before pits closed for the Kanaan yellow. Having yet to pit, Castroneves, Rahal and Pagenaud along with Spencer Pigot, Takuma Sato and J.R. Hildebrand would have to wait until the field was bunched up behind the pace car before coming to the pits. When it all shuffled out, the six drivers who came to pit road did not simply lose their spots at the top of the running order. No, they ended up buried in the running order occupying positions 14-19, ahead only of the retired Power and Kanaan. Pagenaud (5th), Castroneves (8th) and Rahal (9th) would battle back to salvage decent results. Still, that was little consolation, at least, to Rahal.

“The three best cars didn’t win the race or finish 1-2-3," said Rahal in a statement released by the team. “There was nobody that was a match for the three of us all day. It’s a shame but sometimes luck plays a role in these things… but unfortunately the way the officials have decided to close the pits these days, luck plays a huge factor and today it bit us."

Brian, we’ve heard the whining from Graham. The rules are the rules. Newgarden won the race fair and square!

We’ll get to Graham in a moment. As for Newgarden, yes he did win the race fair and square. And I will never blame a competitor for playing the hand he is dealt in order to score the maximum result. He needs no validation from me or anyone else.

Also, one could argue that the leaders left themselves vulnerable to such a scenario by waiting to pit. If you read AR1 you know I have written for years about the strategic importance of pitting earlier in the window ever since the rules changed with the pits closing initially under yellow. And absent any evidence to the contrary, Castroneves, Pagenaud, Rahal and their teams knew the risks and rewards of pitting/staying out when they passed pit lane on lap 23 electing not to take service.

As for Graham, he is certainly never one to offer less than ten words when five will do. However, just because you might not like what he said (he was criticized on social media Sunday for his comments following the race), that doesn’t mean he isn’t right about…

The real issues in question

Ultimately, in my opinion, this boils down to two questions:

Acknowledging that luck or randomness will never be totally eliminated from racing or any other competition, I still think we can agree on a general answer to question one is, no.

While there is an element of strategy in racing, at Toronto, we didn’t see Newgarden and Penske out-strategize the others. The No. 2 team made a pit stop at what turned out to be the ideal time, whereas the leaders made their pit stop at a time in which the results turned out to be penal.

Furthermore, for a racing series to thrive, it needs a lot of things, foremost amongst them: credibility. The public needs to believe that the procedures and regulations are conducive to determining worthy winners and champions. And unless you REALLY KNEW what was going on Sunday, how Newgarden wound up in the lead and the lead group wound up well outside the top-10, made no sense.

Race fans want to see Newgarden pass Castroneves, Rahal and Pagenaud not guess better than them. And while luck can’t totally be eliminated, INDYCAR should at the very least strive for regulations and procedures more likely to produce worthy outcomes.

I have for about a year-and-a-half now advocated for a Virtual Safety Car type procedure in IndyCar. Drivers would be forced to maintain a maximum speed (say 50 miles per hour) under the VSC with certain areas possibly having a reduced speed depending on the situation.

Even better, the technology to monitor the cars already exists with the pit speed limiter. In the case of Pagenaud, Rahal and Castroneves they would have been able to slow down to the maximum speed on track, as would have Newgarden and come to pit road. This would eliminate the silliness of trapping the leaders behind the pace car, and allowing drivers who have already pit to make up miles of track position. Simply put, it would result in a more legitimate race and outcome.

And really: who can’t agree on that being a good thing.

Kanaan's accident marked another disappointing weekend for the driver of the #10 NTT Data Honda. While he’s still ninth in the series standings, a closer look at the results, paints a pretty clear picture on Kanaan’s season: he’s been lousy on road and street courses.

Clearly, Kanaan has enjoyed a storied run in Indy Car racing. And yes, there have been some strong results on the ovals (2nd, Texas; 5th, Indy) in 2017. Still, the above results are simply not at the level expected of the No. 10 Chip Ganassi Racing seat. And with one win since joining Ganassi in 2014, you have to think TK’s days driving for the series’ top teams are probably numbered.

A few quick ones