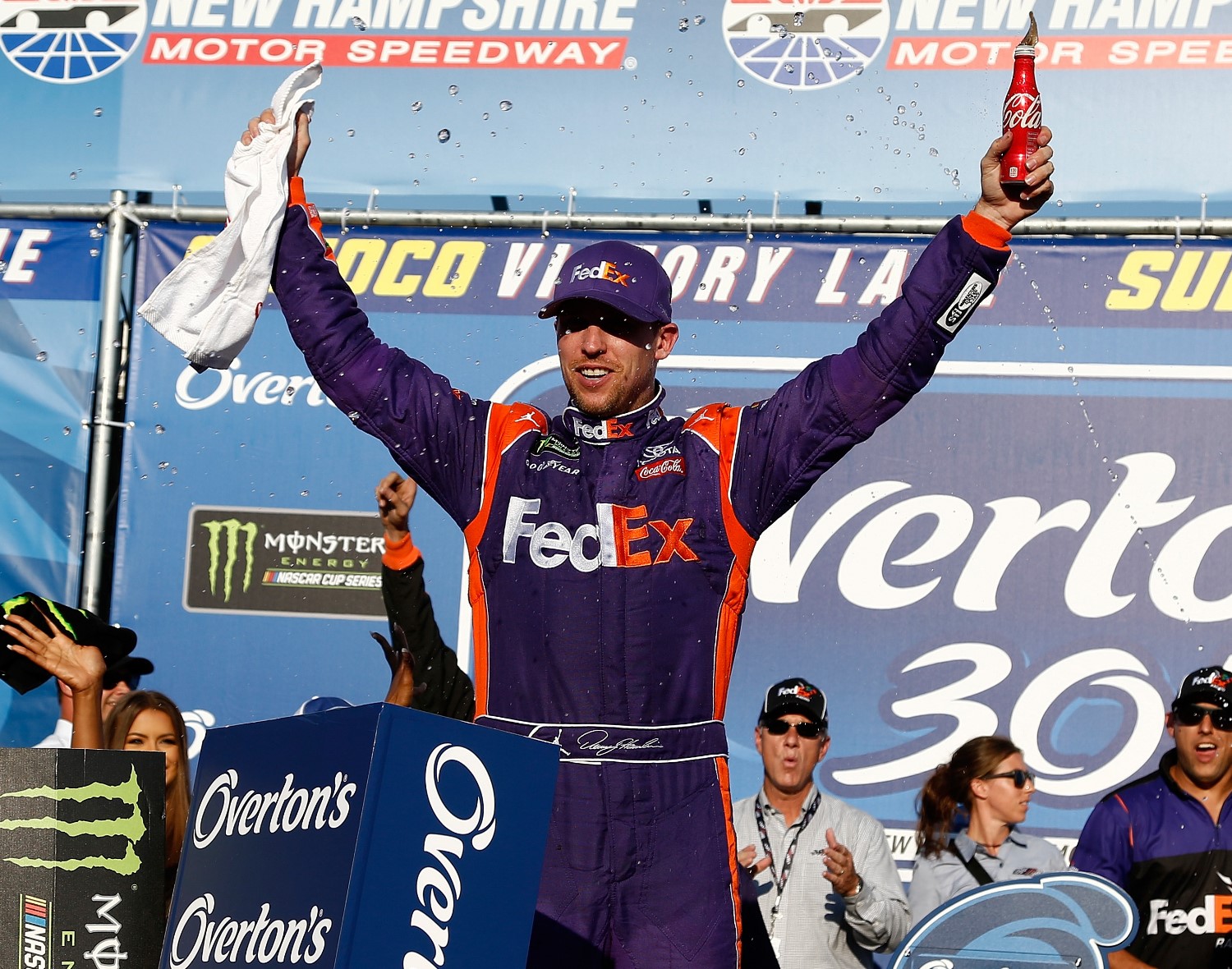 Denny Hamlin held off a closing Kyle Larson to win the NASCAR Monster Cup race in Loudon, New Hampshire ending his 28-race losing streak. Larson who had won the pole but started last after his car failed inspection charged through the field to second but ran out of laps to catch Hamlin.

Martin Truex Jr. came home third in his Toyota with Matt Kenseth and Kevin Harvick rounding out the top-5.

Hamlin led 54 of 301 laps in the No. 11 Toyota, taking the checkered flag of the Overton’s 301 with a 0.509-second margin of victory. Hamlin’s third win at the 1.058-mile track was the 30th of his career in NASCAR’s premier series, marking the first triumph this year for Joe Gibbs Racing.

Kyle Larson started last in the 39-car field and rallied to a second-place finish. He was demoted on the starting grid when an unapproved part was found on his Chip Ganassi Racing No. 42 Chevrolet, disallowing an apparent pole-winning lap.

[adinserter name="GOOGLE AD"]Martin Truex Jr. led a race-high 137 laps from the Coors Light Pole, but was shuffled back to a third-place finish. He avoided major trouble when a right-front tire went flat on his Furniture Row Racing No. 78 Toyota by quickly pitting on Lap 219, on the early end of the pit window.

Matt Kenseth and Kevin Harvick rounded out the top five in the 19th of 36 points-paying races for the series this season.

Kyle Busch led twice for 95 laps and prevailed in Stage 2, but was dropped back in the running order by speeding penalties on each of his last two pit stops — on Lap 237 and 262. He drove back to a 12th-place finish in the Joe Gibbs Racing No. 18 Toyota.

Aric Almirola finished 24th — last car on the lead lap — in his first event since breaking his back in a May 13 crash at Kansas Speedway.

The race was briefly red-flagged during the first stage intermission for parts of the track surface breaking up in Turns 3 and 4.

How were you able to get your first win of the year with a backup car?

“Yeah, just it’s a great feeling. I know we’ve been getting better and better as the year goes on, but definitely needed a win for the organization and for myself and just kind of get some momentum going with the playoffs are coming up, so we’ve got to get going. Really this is awesome. We led a lot of laps for Safe Kids – FedEx donates $111 for the laps that we lead this season, so awesome for them to do that for the FedEx Cares program. Toyota, all their support, Coca-Cola, the Jordan brand – just couldn’t say enough about this race team. It’s a team effort and for them to do the extra work to get us – that engine change before qualifying was key and that pays off."

How does it feel to be back in victory lane?

What was it like fighting with Kyle Larson at the end?

“Yeah, they’ve (Kyle Larson and the No. 42 team) just been so fast this year and we honestly haven’t been able to keep up and so for us to be able to get the lead there, stretch it out – I knew it was going to be important for me to stretch out the lead as far as I could, that way I could pace myself at the end of the race and it was just enough."

What does this do for you and your team?

“Yeah, we get in the playoffs, we get some playoff bonus points and we’re ready to go now, so we’ve got to – we’ve still got a lot of work to do. I feel like we need a little bit more speed out of our cars to be competitive week in, week out, but honestly this is a great place to start."

Is there anything you want to say after securing your playoff spot?

“A relief. He (Denny Hamlin) did a good job. Everybody said we had a good chance today. He told me we didn’t have to change much and we were a little bit off face, but we made it work and executed today and I’m really happy with these guys."

“Yeah, you know, we had a really good WIX Filters Toyota for most of the race and led a bunch of laps and then got that flat tire, kind of got off sequence. You know, whatever happened there after lap 200 or so I think the VHT was kind of wore off the track and we started to lose our edge a little bit there. We still had a shot, but on the last restart we got the inside lane there, restarted third. It wasn't the place to be, obviously. I think the 11 (Denny Hamlin) started fourth and that was really the place I would have liked to have been. And then we just didn't get a good restart on the bottom and lost a couple spots and had to battle back and then just didn't quite have the speed at the end of the race that we had the first 200 laps. All in all, it was a tough fought day. We had to come from 24th at one point in the field and just a hard fought day, a good job by everybody and a solid third place effort. Just didn't have enough there at the end."

Did you think you had a chance to win at the end?

“After we came off pit road with two tires, no, I did not think it was going to be us because there was nobody behind me. They were all still back there putting lefts on, but that’s just the way it goes sometimes. Jason (Ratcliff, crew chief) and the crew did a great job today. We had a fast DEWALK Camry. We had good pit stops. We had good strategy to get us those stage points and had a good enough car to still get back through and finish pretty good in the second stage, so I felt like we had the car. We just needed to have those left side tires at the end."

Was today a statement?

“It doesn’t make any difference. It really doesn’t – I mean, that’s, that’s way out in the future. That doesn’t change anything for today. You don’t try any harder and you don’t try any less. You do the best you can every week. When you try to do anything different than that, the results always go downhill, so raced as hard as we could race today. They gave me a great race car. Just didn’t work out."

“It was a long day for sure, but, you know what, these guys never give up. They worked hard all weekend long just to make adjustments to the car and try to make the car a little bit better. The race track changed pretty much all weekend with the VHT and with the weather. I think today has been the sunniest day of the whole weekend, so we had a couple issues there on the pit road leaving my box on the stop, but very proud of these guys. We made some good adjustments in the last couple runs we were able to overcome for a good finish."

How big is Denny Hamlin’s win for Joe Gibbs Racing?

“This sport is built of momentum, so, you know, half of the season without wins it was something big, so now with Denny (Hamlin) finally getting one trip to victory lane, it’s a big deal for Joe Gibbs Racing and hopefully we can build on that and move forward."