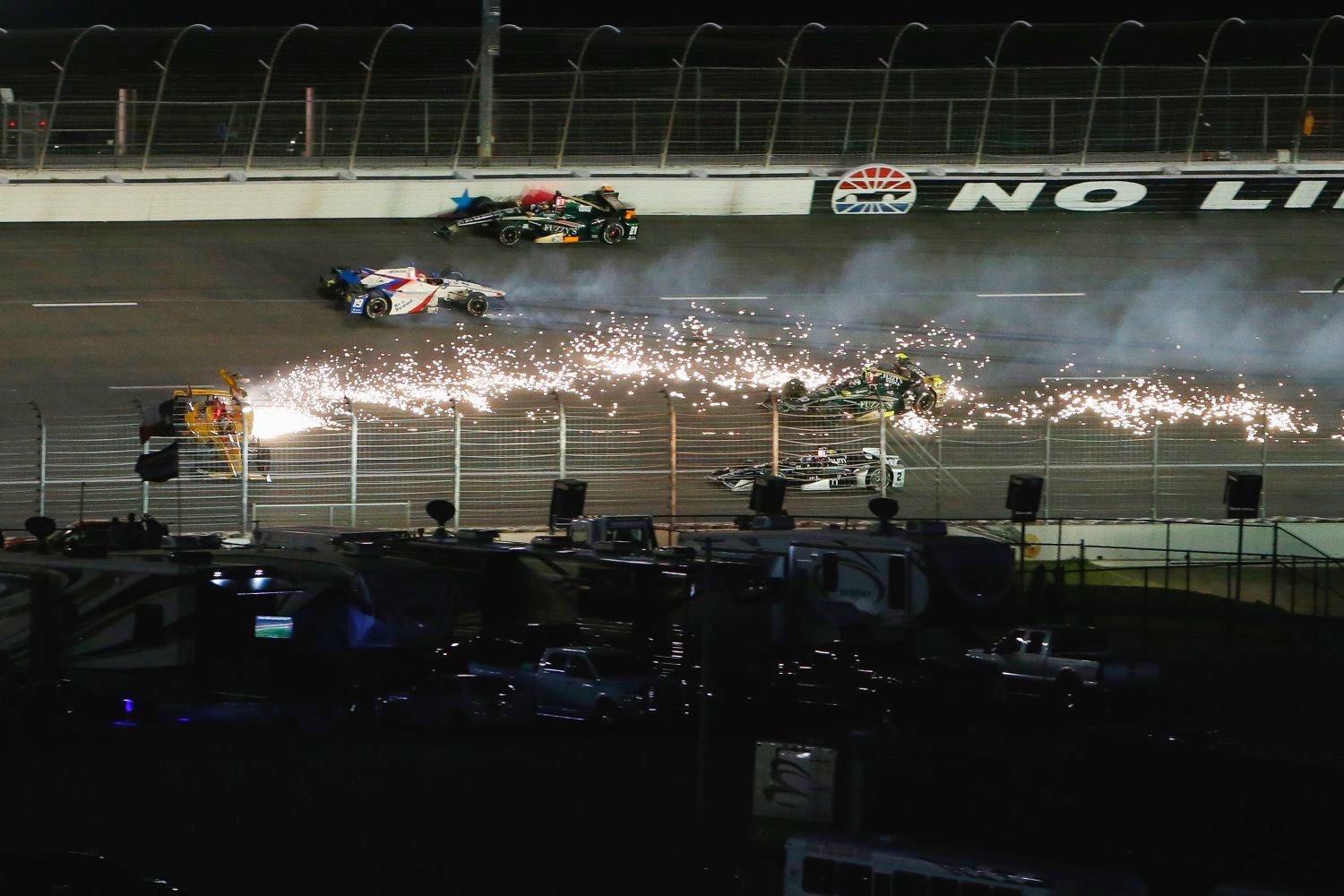 Other commitments and responsibilities of late have left little time for thinking and writing about the world of motorsport. Thus, I missed among other things my usual postscripts for the last two IndyCar races at Texas Motor Speedway and Road America.

For today, my plan is for a Mid-Season IndyCar Year in Review. However, before we get to that I will give my brief thoughts on both Texas and Road America.

Let’s get right to this: INDYCAR might not know this, but they have a dilemma on their hands when it comes to the 'much-discussed' pack racing. Of course, the dangers of high-downforce, open cockpit Indy cars running at 230 miles per hour on banked oval tracks in extreme proximity, are not something you need me to explain. Nor should you need me to explain this: should the Verizon IndyCar Series continue to run banked ovals with excessive amounts of downforce, drivers heads exposed and the cars packed together, the question is when, not if, disaster will strike.

With that said, the question still remains: is this a route the series wants to pursue? Now, if you're asking me, I would prefer a lower downforce high horsepower formula that required drivers to actually race one another, instead of holding the throttle to the floor all the way around the track. This would be not only safer, but more entertaining racing, again, if you ask me. Overwhelmingly, this appears to be what the drivers would prefer as well.

But INDYCAR is not in the business of pleasing me or race car drivers. And twice, in the last three seasons with Fontana in 2015 and to a lesser extent Texas this year this year we've seen races that seem to draw more attention amongst the public. Texas had its best TV rating in four seasons, and IndyCar saw a bump in viewership late in 2015 following the wild Fontana race. While these bumps in TV ratings should in no way be mistaken for good TV ratings, when you apply the relative approach, it seems more people are interested with Texas and Fontana than other races. And when you're trying to gain traction of some kind, a good place to start is asking the simple question: what does the public want?

[adinserter name="GOOGLE AD"]Now, am I saying that two samples of improved television ratings constitute a trend? Not at all. Am I saying that those improved ratings might be indicative of something the public has a greater appetite for than the series' teams, drivers and even diehard followers might care to admit? Yeah, I am saying that. Would the introduction of canopies offset some of the potential dangers and would such a measure be economically viable? I don’t know.

But ultimately, Texas left more questions than answers for me. At the very least, I hope INDYCAR is asking themselves some of these same questions

After sweeping the top-4 qualifying positions Saturday, Team Penske entered Sunday's Kohler Grand Prix at Road America knowing that – barring something bizarre – there was ONE and ONLY ONE driver with a legitimate chance of beating them. What did Team Penske do?

Instead of running a comprehensive team strategy that covered their bases against fifth-place starter and eventual winner Scott Dixon, Penske allowed its four drivers to fight it out amongst themselves. And, of course, with superb strategy, which included Dixon going a lap longer than anyone else in the second pit sequence, the driver of the No.9 NTT Data Honda went on to record his first win of 2017.

Granted, you can say that team orders are frowned upon, and not kosher so to speak in IndyCar. I don't personally agree but would be happy to entertain that discussion. For now, I'm merely saying that if Team Penske continues simply letting their four drivers race amongst themselves without thinking more globally if you will, they shouldn't be surprised when Dixon is lifting his fifth Astor Cup come September in Sonoma.

Now, for the Mid-Season Review….

Despite only one victory, the Kiwi has seven top-5s and the Indy 500 pole. Plus, as discussed above, he beat the four Penske cars in a straight up battle at Road America turning in the drive of the year.

Don’t look now, but we have some very Dixon favorable tracks coming up with Toronto, Mid-Ohio, Sonoma, and Watkins Glen.

Acknowledging my criticism of the team’s in race strategy above and previously, one has to admire the professionalism and performance that Team Penske brings to the track week-after-week, year-after-year. And in 2017, the performance of the four cars as a whole has arguably been better than ever.

Despite the move to Chevrolet and the addition of two promising young drivers, the results have been essentially the same for the Foyt squad. Conor Daly and Carlos Munoz have combined for a total of four top-10s and a best finish of seventh. If you’re looking for a reason to explain the team’s struggles: qualifying. The team has one top-10 qualifying effort all year (Daly 10th, Detroit 2).

You all know Sebastien Bourdais had a strong start to the season for Dale Coyne Racing. With his former Newman/Haas team manager Craig Hampson back on the radio, the Frenchman went all 2005 on everyone to start the season, winning at St. Pete then finishing second at Long Beach. During his qualifying run for the Indianapolis 500, in which he was atop the time charts, the Frenchman had a vicious crash sustaining multiple pelvic fractures.

Of course, the missed races are only part of the story. The accident suddenly and cruelly interrupted what was shaping up to be a banner year for Bourdais and DCR. Remember, not only was the Frenchman a potential pole winner for the500, his rookie teammate would ultimately finish third in the race. What might Bourdais have done? We saw his replacement at Texas Tristan Vautier run in the top-5 much of the race before getting caught up in an accident. What might Bourdais have done?

Certainly, Bourdais will return to the cockpit of the No. 18 Honda soon, and likely enjoy success. Still, we will always be left to wonder, what might have been of 2017.

Everyone won. Fernando Alonso made new fans, the Indianapolis 500 attracted an interest internationally that it hasn’t seen in years, and perhaps most important, although Alonso ran well, he didn’t win. Yes, like the Kurt Busch Indy cameo in 2014, Alonso’s appearance added greatly to the month of May.

Two weeks later, Alonso appeared on the Texas race broadcast and was asked about running IndyCar full-time. “I'm very open to anything," Alonso said. “I'm more ready to do F1 and try to find the best car possible out there. I would look at different options but, yes, the Indy 500 would be the first priority for the triple crown, but full-season another time, why not?"

Granted, he wasn’t going to say “hell no!" on national television, and was perhaps just being polite. Also, I can’t imagine Alonso was watching the Texas race saying to himself “gee, I’d love to run 230 miles per hour wheel to wheel before a crowd of dozens." And none of the above even begins to take into account the fact Alonso earns an estimated $24 million annually from McLaren – perhaps as much as the entire IndyCar field combined.

Still, he didn’t slam the door shut either. Seemingly tired and despondent with F1, and few good options available for 2018, combined with the successful month of May, the iron is hotter RIGHT NOW than it’s ever been or going to be. And simply put, Alonso to IndyCar full-time is a TOTAL game changer. If you’re Mark Miles you have to pick up the phone and find out where the two-time World Champion’s head is.

A Few Quick Ones

Best race…Easily the Indianapolis 500, which since a bit of a dark period from 2007-2010 has consistently provided entertaining racing and thrilling finishes.

Worst race…Phoenix was near unwatchable. Again, if IndyCar is going to make that market work, a different technical approach is a MUST.

Driver Most on the Verge of Breaking Out: Alexander Rossi….I have to admit my evidence here is somewhat anecdotal. However, it seems Rossi more than anyone outside Dixon and the Penskes is capable of putting together the quick lap on a given day. He’s also been largely even with longtime Andretti Autosport ace Ryan Hunter-Reay, who is enduring a miserable season, in terms of qualifying with somewhat better race results. My guess is a Rossi breakout could come as soon as this weekend in Iowa, a longtime Andretti playground.