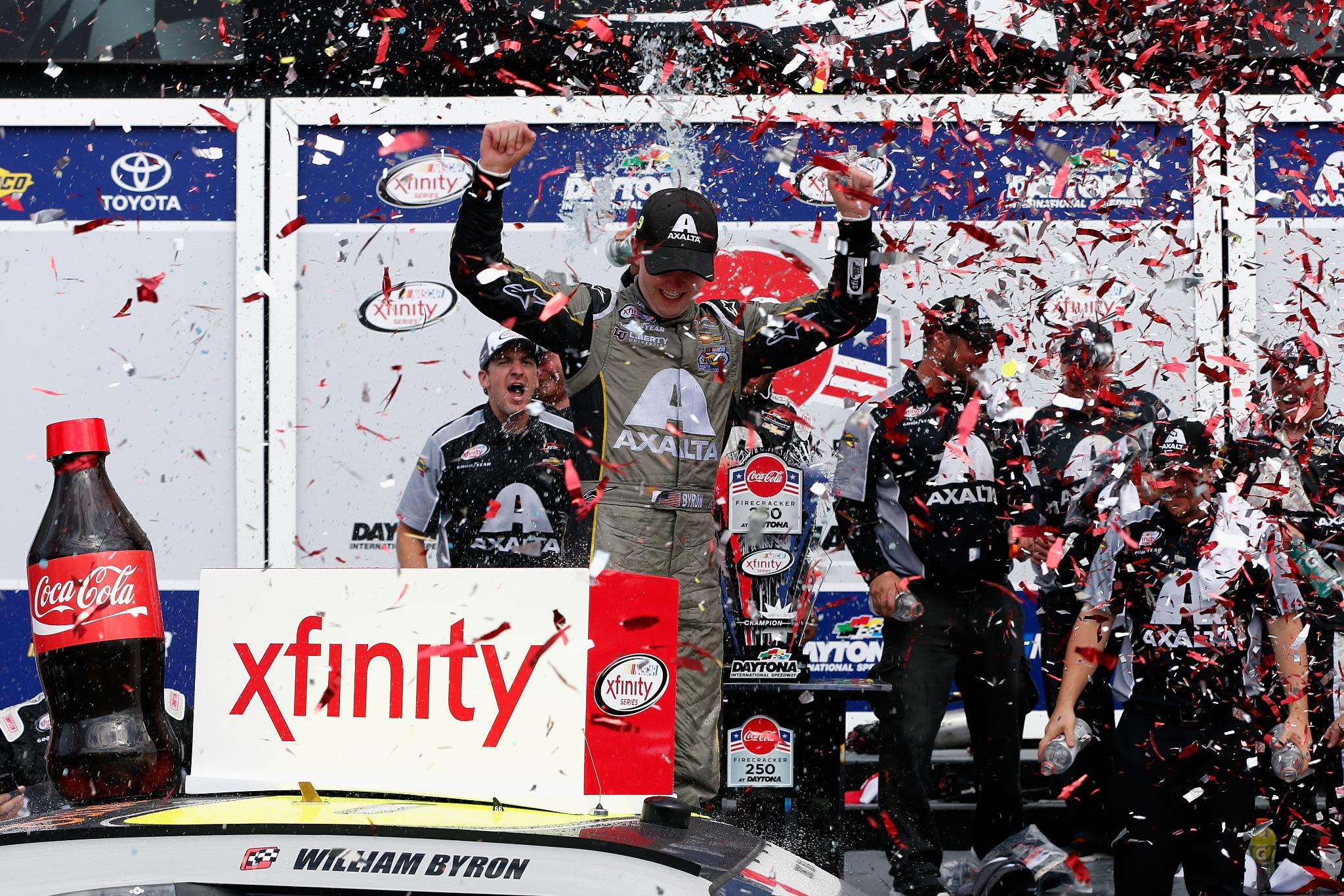 In a wild race that ended more than 21 hours after it started, William Byron won his second NASCAR XFINITY Series event in seven days, taking the checkered flag in overtime in Saturday’s weather-delayed Coca-Cola Firecracker 250 at Daytona International Speedway.

Byron took the lead from Joey Logano on Lap 98 of a scheduled 100, when off-center contact from Byron’s front bumper sent Logano’s No. 22 Ford plowing through the infield grass below the backstretch.

"I was just trying to push him to make it a two-man race," Byron said after doubling up on his victory last week at Iowa Speedway. "There was some room, and I got him a little squirrely."

Byron picked up his first win at the 2.5-mile superspeedway and the second of his career, two weeks after finishing second to Denny Hamlin by .012 seconds at Michigan.

The race, which started on Friday night but was postponed after 11 laps, ended under caution when NASCAR threw the yellow flag for a wreck on the backstretch after Byron had crossed the overtime line. The 19-year-old driver of the No. 9 Chevrolet led JR Motorsports teammate Elliott Sadler to the checkered flag.

In between the Friday start and the Saturday finish were three red-flag periods – the first of more than 16 hours for the rain delay, a second of 2 hours 29 minutes for lightning and rain and a third to clean up a late wreck.

Logano’s trip through the grass didn’t necessitate a caution, but a massive 18-car wreck on the backstretch brought out the eighth yellow on Lap 99 and forced the overtime. With a push from Sadler, Byron surged to the front after a restart on lap 103 and held the spot until NASCAR called the final caution for the wreck on the backstretch.

Sadler’s push of his teammate was a planned move.

"He and I talked for a long time during qualifying (on Friday) about what we would do on a restart," Sadler said. "He nailed it."

Sadler, 42, continues to be impressed by a teammate less than half his age.

"William Byron is the real deal," Sadler said. "He knows where the edge is with his car, and he keeps it in one piece."

"We've had a great last three weeks," he said. "I think, as a team, we're getting more and more confident."