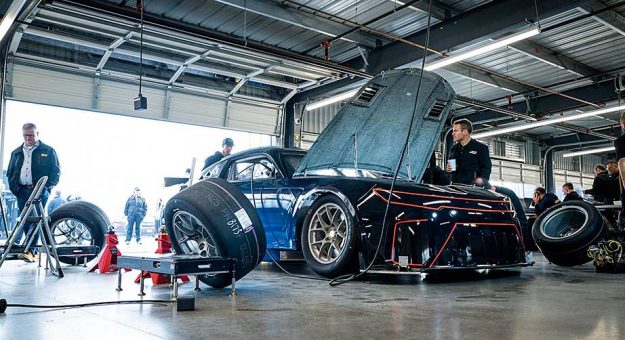 Via Instagram Joey Logano provided an insightful walkthrough and initial feedback on driving the NASCAR Cup Series’ Next Gen car Tuesday morning, conveying his anticipation for a tougher driving challenge with the new model’s debut in 2021. Logano offered a three-plus-minute walkaround on social media, illustrating some of the Next Gen car’s components, including a larger and wider wheel-tire combination, a new body design, a shorter rear spoiler for Tuesday’s test, a raised splitter and larger brakes.

“It’s not about what drives the best, what’s the easiest to drive … we don’t want that," Logano said. “We want something that’s challenging that will show that the best driver and the best team will prevail. … So we’re trying things on different extremes — a lot of downforce, and then little downforce and then figure out what’s going to make the best racing. And then you go from there to make the next step, bring some more cars. We’re still in the preliminary stages, but we definitely have some cool pieces to the car."

Out west at @ismraceway Day 2 testing the Next Gen Car. Here is a behind the scenes look of what I know so far!

The prototype was built by Richard Childress Racing, which continues to play a leading role in the car’s development. Delegations from Team Penske — including Todd Gordon, Logano’s crew chief –and NASCAR’s competition wing are in Phoenix for this week’s test, observing and assisting in making changes to the vehicle.

The car is the same test mule that RCR’s Austin Dillon drove in a two-day test Oct. 8-9 at Richmond Raceway.

“We had a really good test at Richmond, and then said, ‘How can we make the car better?’ " said John Probst, NASCAR senior vice president of racing innovation. “We came up with 60-plus things we could do to the car. Not all of the things could be implemented into the car we have now, but some of them are in the design phase. We effectively updated a lot of the aerodynamics on the car."

Logano said the largest difference between the Cup Series’ current car and its Next Gen counterpart was the brakes, which he characterized as “way bigger." He said the increased stopping power and a different steering feel were an adjustment to make over the course of Monday’s sessions.

“When the car gets loose with this Next Gen car, it doesn’t come back until the driver steers the car back — it doesn’t fix itself. And that puts it more in the driver’s hands. And I like that piece," Logano said. “It’s going to be challenging, but I think you’ll see more mistakes on the race track which makes, in my opinion, better racing, and more passing opportunities.

“The tire is completely different, and the body isn’t close to the same. So your natural reactions are wrong. And you have to be able to adapt quick when you feel something instead of trying to let the car fix itself."

“It’s been fun. I was actually thinking about this earlier today — the opportunity of sitting here developing the future of NASCAR," Logano said. “I think that’s really neat. It brought back feelings of when I was 15, 16 years old for Joe Gibbs Racing — I wasn’t able to race in the Cup Series because I was too young, but testing was open at that time. I was the test driver — I tested everywhere, all the time. And I thought it was the coolest thing that I was driving the test car.

“And over the years, you race Cup cars all the time so testing isn’t neat, but this brought me back to when I was 16 years old and you’re driving something for the first time and it’s exciting, and what it means for the sport, and what it means for me to drive the car. They could have picked anyone to drive it and they picked me, and that’s really cool."