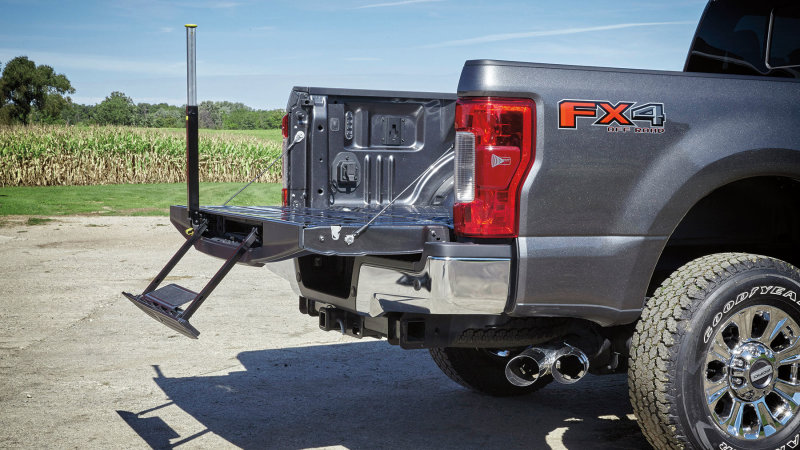 On Friday, Ford Motor Company issued a recall of certain 2017-2019 F-250, F-350, and F-450 pickups to fix tailgates that might fly open at inopportune moments. The callback has been a long time coming.

According to Ford, the recall affects only those trucks with an electric release switch on the tailgate handle. The culprit? The very thing that breeds life itself: water.

“In affected vehicles with an electric tailgate latch-release switch mounted in the tailgate handle, water entering the electrical wiring system may cause a short circuit, resulting in unintended switch activation and release of the tailgate latches," the automaker states. “This could cause the tailgate to open unintentionally, whether the vehicle is in motion or stationary. This condition may result in the loss of unrestrained cargo, increasing the risk of a crash."

Obviously, trucks with only manual tailgate handles are not included in the recall. Adding electricity to a mechanism or feature that previously lacked such modernity is fraught with danger. Just ask my friend, whose F-150’s power running boards didn’t last long in the harsh conditions of the salt belt. Fixed boards would have averted those trips to the dealer.

In the case of the unlatching tailgates, the National Highway Traffic Safety Administration was all over the issue by October of 2018, launching an investigation into 2017 model-year Ford trucks with electrically-actuated tailgates. That probe included the F-150, too. At the time, it seemed a recall was only a matter of time.

While Ford claims it’s unaware of any accidents or injuries stemming from the potential fault, dropping your tailgate at highway speeds with a full bed of junk could spell disaster for motorists in other vehicles. The recall, which seeks to modify the trucks’ tailgate frame wiring harnesses and install a new tailgate release switch, impacts some 231,664 vehicles in the U.S. and federal territories and 29,953 in Canada.

If you’re thinking that Ford is the only automaker to grapple with wonky power tailgates, think again. In the summer of 2018, Fiat Chrysler recalled 1.1 million Ram trucks for tailgates with a mind of their own. Truth About Cars