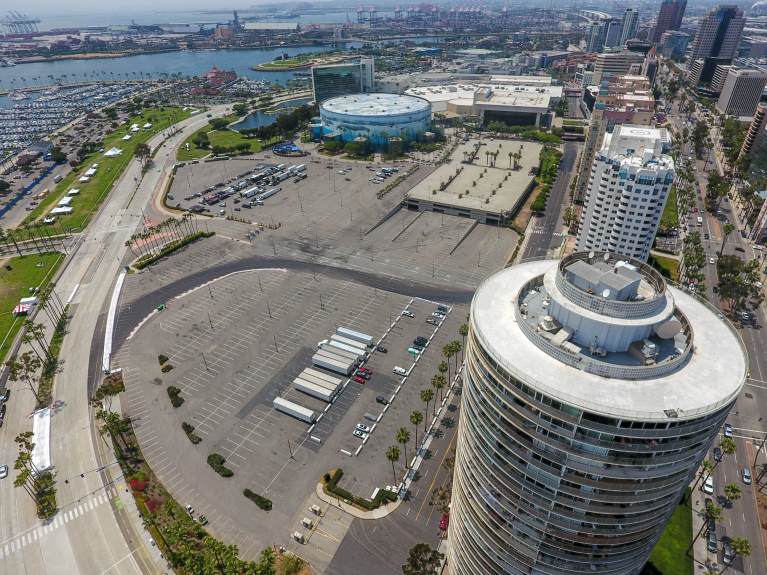 UPDATE In researching this further, according to this measure we found, passed by the Long Beach City Council back on October 22nd, the race should be safe until 2028. There has been some discussion about the future use of the 13 acre parcel located on the east side of the Convention Center and the possible impact on the Grand Prix.

The significant point is the recognition that no new development would take place until after the 2028 Los Angeles Summer Olympics have been completed since there will be at least five events held in this very area.

12/05/19 ï»¿Just when you thought the Honda GP of Long Beach was safe after the Los Angeles Angels elected not to build a stadium on the Long Beach waterfront that would have eliminated the GP paddock and possibly the race, don't smile because LB is looking for new ways to hurt the race.

The Major League Baseball team had been in talks with both Anaheim and Long Beach to decide whether to stay rooted in Orange County or to develop a new waterfront stadium in the county the team’s name cites.

“The city congratulates Anaheim and the Los Angeles Angels for coming to an agreement that keeps the team in its longtime home," Kevin Lee, a spokesman for the Long Beach City Manager’s Office, said in a statement, “and appreciates the important dialog with Angels leadership throughout the process."

Long Beach pitched a 13-acre site known as the “elephant lot," just east of the Convention and Entertainment Center downtown, as the location for the proposed stadium. But now it appears the city will need to make other plans for the space.

“We all knew that we were being looked at," Steve Goodling, the convention center’s president and CEO, said Wednesday, “but at the same time, we also knew that it was a long shot."

Long Beach Mayor Robert Garcia, for his part, congratulated Anaheim and the team.

“We look forward to what’s next and possible for the city’s Downtown waterfront site," he said on Twitter.

“It woke people up to the fact that Long Beach truly is a city that continues to develop and has a lot of great attractions downtown and is a great destination," Goodling said. “I think that (the Angels) looking at us actually cemented that."

Goodling said “it’s too early" to discuss what could fill the space. But the Angels’ interest, he said, sparked other possibilities.

“It exposed the development opportunities to others who were not aware of it," Goodling said, “so it’s been very beneficial that we actually were considered and looked at as a city."

Before the Angels came along, other ideas Long Beach considered for the waterfront site included an event plaza, an expanded Convention Center, a university extension campus and more. Other stadium opportunities, like an NBA team or a Minor League Baseball team, were also suggested.

Whatever comes to the lot, Goodling said, will likely be a win for Long Beach, but a loss for the IndyCar race.

“In the development world, they are always coming up with creative new concepts," he said. “I’m hoping someone will say, ‘Here’s something else that can add to that vitality of the downtown, and the growth that’s already happening.’"

A visioning process for the elephant lot, according to city staff, will begin early next year. In part from the Long Beach Press Telegram