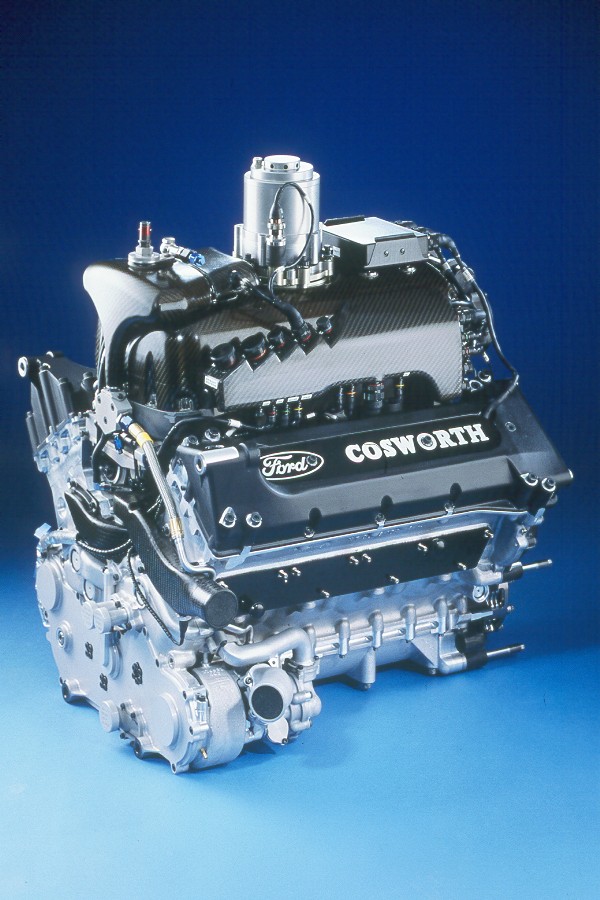 UPDATE This rumor is downgraded to 'false' today. A Cosworth spokesperson told AR1.com "there is no truth in the rumor that Cosworth is in discussions with, or building an IndyCar engine, for a third manufacturer."

12/10/17 Did Ricardo Juncos spill the beans on a third IndyCar engine coming to be built by Cosworth but badged by a leading auto manufacturer? Towards the end of this video Juncos talks about how he bought the KV Racing IndyCars. He states that Kevin Kalkhoven made him an offer that was far too much for him to afford.

He says "it's confidential" that Cosworth is going to make a third engine for a brand that has yet to be announced, but that it would enter IndyCar in 2019 or 2020.

After Juncos told Mark Miles and Jay Frye that he could not afford Kalkhoven's price Miles called Kalkhoven and told him that if he wanted IndyCar to approve his engine he had to make sure that Juncos could afford his equipment. Juncos said Kalkhoven then came back with a new proposal that was accepted met his budget.

08/26/14 Per an update from the company's CEO Hal Reisiger in a conversation last week, we'll know within 30-60 days whether the company's intentions can become a reality.

"We have had discussions take place with two OEMs, and we are obviously very committed to it," Reisiger told MotorSportsTalk. “A number of the OEMS with new management and sponsors of IndyCar have been watching the positive changes to determine their level of interest.

"We're hopeful that within the coming weeks, we can take it to the next level."

Regarding aero kits, which are set to be introduced this offseason and then make their race debut once the North American portion of the 2015 season premieres, Reisiger said Cosworth has partners who could work with them to make that happen.

"We have partners we could work with we've already lined up, which is something we have to take into account," he said. "We have two pre-selected partners for the aero kits who could support our efforts immediately." NBCsports.com

07/06/14 We hear that the series and Cosworth have a car manufacturer that is very (stress very) interested into entering the IndyCar series for the 2016 season. The biggest barrier to entry believe it or not are the bodykits. Pratt And Whitney is doing Chevy's and Wirth is doing Honda's. There just are not enough companies outside of F1 teams, who have the know-how and wind tunnel to develop a proper body kit. They can run the standard Dallara body kit but the cars would not be competitive.

No one wants another Lotus situation so everyone is doing their homework.

06/28/14 IndyCar President of Operations and Competition Derrick Walker told Motorsport.com in Houston Friday that he is in serious talks with two more engine suppliers. There’s a caveat: “Even if we were to announce another manufacturer today," he said, “it would be two years before we saw them on the grid." This is, in part, to give Honda and Chevrolet an opportunity to prepare for, if needed, the added competition.

Still, it seems probable that sooner rather than later, at least one new engine supplier will announce an intention to join the series, though the 2.2-liter, twin-turbocharged V6 engine could be built by a performance company like Cosworth, in partnership with a new manufacturer, creating a relationship similar to the one Chevrolet has with Ilmor. Cosworth was purchased by KV Racing team owner Kevin Kalkhoven, back when he was the driving force behind the last iteration of ChampCar.

06/09/14
Q: I read an article that Honda wanted and needed a third engine supplier by 2016. They did not say what would or could happen. Any rumblings on a strong third engine manufacturer? Ford (Cosworth) needs to be in Indy Car. Ford and Toyota are both struggling in NASCAR. Toyota does OK in the Truck Series, and Ford is out to lunch. A lot of good stuff is going well for IndyCar and I hope they don't screw it up. Verizon has done a great job promoting the Detroit races on ESPN, so compared to the past, that is good. Edgar Arnold

Robin Miller/Racer: Honda and General Motors both welcome another engine manufacturer but it’s not imperative to their continuing and it’s not likely to be Ford after Edsel Ford’s recent comments. Maybe Dodge? Maybe Audi? Nothing on the horizon so maybe that’s why Derrick Walker opened the door for a normally-aspirated engine. ESPN has been doing a good job of promoting IndyCar this season and Verizon has some awesome commercials in the pipeline.

We caught up with KV Racing Technology co-owner Kevin Kalkhoven on the grid before Sunday's race. Kalkhoven, of course, is a co-owner of the famous ramous race engine company Cosworth. And there have been rumors swirling of late that Cosworth may make a return to Indy Car racing in time for the 100th Indianapolis 500 in 2016.

Kalkhoven, as you might imagine, was somewhat coy and non-committal when we asked him about the prospects of Cosworth aligning with a manufacturer. He did say that the negotiations were beyond initial stages, if not advanced. He did also note that Cosworth was in discussions with "more than one," potential manufacturer to badge the engines. Of course, per IndyCar rules, engine suppliers must align with a manufacturer a la Ilmor and Chevrolet.

05/18/14 So, long-term engine builder Cosworth has publicly announced that its courting manufactures for a Verizon IndyCar Series effort in 2016, but they’re not talking to the most likely suspect.

Cosworth has announced a plan to compete in the 2016 Indy 500 and then launch a full-time effort in 2017. Both Chevy and Honda have said they’d welcome a third manufacture in the sport, and Chevrolet’s head of their Verizon IndyCar Program, Chris Berube, told Autosport that Cosworth could step in and be competitive. Still the question remains, who is Cosworth talking with? It’s not who I thought it was.

Ford Motor Company and Cosworth have a rich history together starting in Formula One and going down every major category of international motorsport. The Ford-badged Cosworth Double Four Valve engine is widely considered the most successful engine in the history of motorsport. Together Ford and Cosworth won twelve Formula One titles, claimed ten Indianapolis 500 and two 24 Hours of Le Mans, but Edsel Ford Jr said he there wasn’t a snowball’s chance in Arizona of returning to IndyCar. Ford told More Front Wing that they aren’t coming back to the Indy 500.

The General Motors guys would like us there, and Honda would like us there, but there’s just no value in it. I’ve talked to Jamie [Allison, director of Ford Racing] a lot about it. He, Raj [Nair, group vice president of global product development] and I don’t think any of us really want to go to IndyCar racing."

So, if Cosworth is in honest talks with two manufactures, as they’ve reported, who are they?

Here’s my best guesses on the likely contenders: Audi

Long rumored to be interested in the series could Audi be serious about coming to the Indy 500? If they have they’ve been successful in being quiet.

Last spring Audi Sport director Wolfgang Durheimer told Autosport that they were honestly exploring IndyCar, and it makes sense they’d still be in the game. I’d say the odds are at least 60-40 that Audi is talking with Cosworth.

Mazda
Mazda is the sole engine manufacture involved in the Road to Indy ladder system, and is heavily invested in endurance racing worldwide. It seems likely to me that they’re at least considering the possibility of moving up to IndyCar with Cosworth. They, along with Toyota and Honda are expecting a slowdown in Japanese auto sales because a tax increase, and with IndyCar's supposed international push coming perhaps they would see more value in IndyCar's brand in America and abroad.

Dodge
Before you think that the Dodge Ram brand might not blend well with the IndyCar crowd I was at Detroit and Alabama for the IndyCar races last year and saw a good number of American trucks. After leaving NASCAR for lack of a team to partner with in 2013 could a member of the Dodge/Chrysler/Fiat group be looking at IndyCar?

Badging a Cosworth engine, supporting six to eight entries and the corresponding ad buy would be significantly less than what they were paying for their three-team NASCAR effort.

Dark Horses: Kia/Subaru/Suzuki/Hyundai
Long at the small end of the American auto sales it could make sense to me if one of the smaller manufactures would look at IndyCar as a way to build their brand. Beating Chevy and Honda in IndyCar could be a valuable marking tool to a company like Kia, which has no racing heritage to speak of. Also, with Formula One not returning to the Korean International Circuit it opens a door for Kia or Hyundai to title sponsor an international race on their country’s premier track.

Infiniti
The only reason I think they could be interested is that they raced in the old IRL from its formation in 1996 to 2002. They recently stepped back into motorsports in a big way when it sponsored Red Bull Racing’s Formula One effort.

I can’t possibly imagine: Jaguar/Noble/Tesla/Caterham I consider it super unlikely that an international track day or luxury brand could be considering the Indy 500. They were interested in CART around the time of the split, but I can’t see them coming back, not with the crowds and the engine rules being what they are. BeyondTheFlag