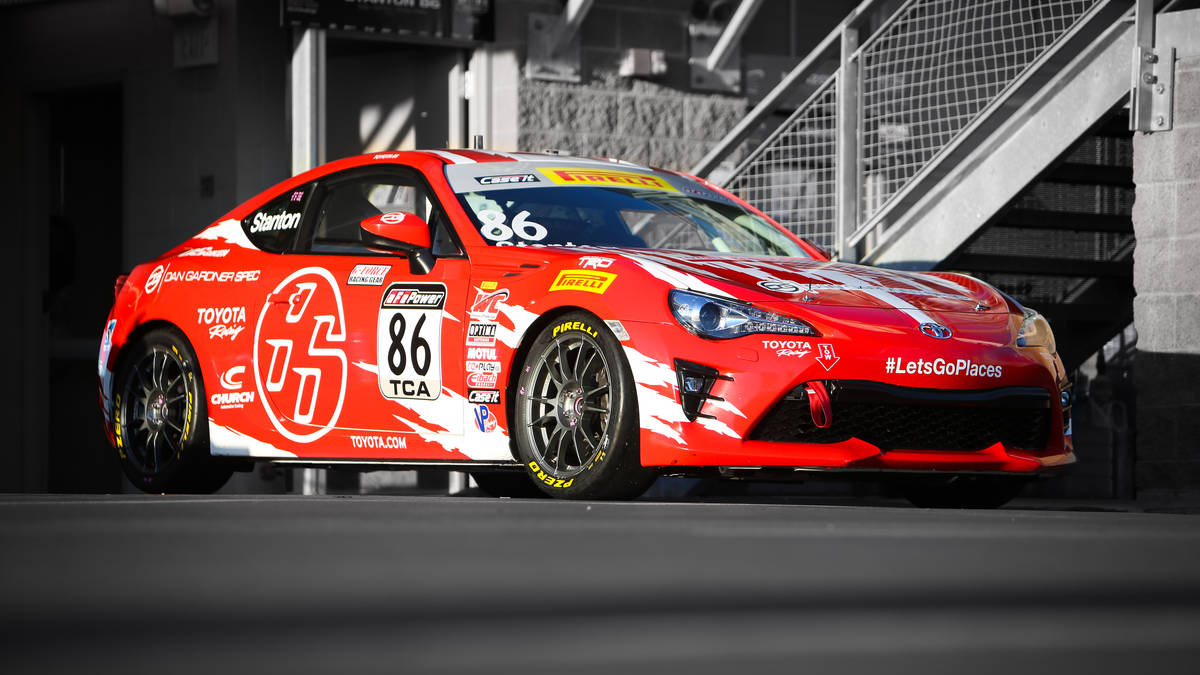 For the Pirelli World Challenge, Toyota has been something of a great white whale, constantly out of reach but always sought after by the touring-car series writes Matt Weaver of AutoWeek.

Which makes PWC Â­president and CEO Greg Gill the Captain Ahab of this analogy.

Under Gill’s watch, PWC has widely expanded manufacturer involvement, but Toyota has remained notably absent. Toyota is involved in several racing series (IMSA under the Lexus banner) but is the only major manufacturer not participating in customer touring-car competition.

Sure, there is the Tech Sport Racing Scion team, but that program is completely independent of Toyota Racing Development.

Entered by DG-Spec Racing and with veteran driver Craig Stanton behind the wheel, the Toyota 86 made its World Challenge TCA class debut on Aug. 12 at the Utah Motorsports Campus. The entry carried with it the hopes of Toyota enthusiasts who want to see their favorite brand provide some customer support.

Looking to showcase the precision of the Toyota 86 sports car, Toyota Racing Development has entered the Pirelli World Challenge event at the Utah Motorsports Campus in Tooele, Utah, Aug. …

It carried Gill’s hope, too.

“If you know anything about our discipline, the 86 is iconic," Gill said. “You think of the Civic certainly, but the 86 was always the other car. When I first heard about it, I thought maybe it was just a (rebranding of the FR-S) but no, they’ve built a car that really works.And for us, it’s a confirmation that no one has more makes and models than we do. That’s something that’s important to everyone. They are the missing piece, the last OE, and we’re happy about this."

The car fared well enough, finishing third and fourth in a doubleheader, but the results were only a fraction of the ultimate goal. Toyota needs to “win on Sunday and sell on Monday" to warrant TRD arriving in a full-time capacity.

The owner of this entry was DG-Spec principal and longtime TRD partner Dan Gardner. As a Toyota devotee, Gardner loves the 86 and sees an opportunity to become the middleman between teams and Toyota. He entered the car in the Spring Fling Autocross in Palm Springs, California, and wiped the 80-car field with it. Regard-less, TRD executives could not be persuaded to sign off on full-fledged support.

Ryan Tuerck of the U.S. Formula Drift racing circuit took the aptly named Toyota GT4586 for some tire-shredding runs in Orlando. Thankfully, we have the smoky video evidence. We've known this was …

That changed when Toyota Parts and Accessories marketing manager Preston Dyer agreed to a one-race sponsorship of the 86 to see if it could generate enough interest to warrant additional support.

From that standpoint, the car was an overwhelming success.

Several team owners and drivers walked into the DG-Spec garage area over the weekend and complimented the 86 after giving it an extensive evaluation.

But the bottom line is if TRD or even the European-based Toyota Motorsport GmbH can be convinced that they can move cars, that makes the decision to field the 86 easier.

“I think people were blown away," Gardner said. “There was a lot of interest for a turn-key race car. I can’t speak for Toyota, but I believe this is a competitive and affordable car. And I think that there’s a future for it here." Matt Weaver/AutoWeek